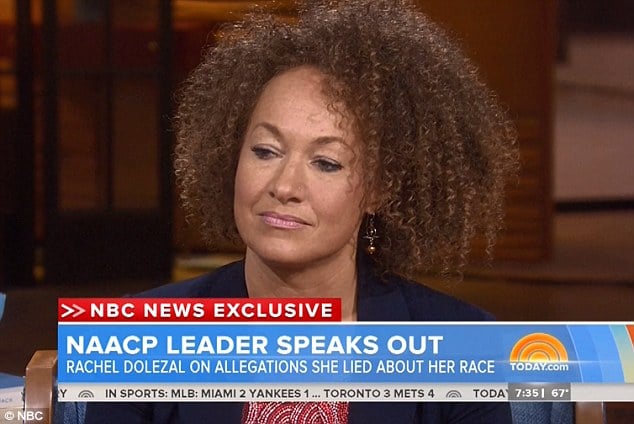 Rather than backing down or apologizing as some have suggested for her purported fraud of living the life and identify of a black woman whilst genetically being a white woman, Rachel Dolezal this morning told Matt Lauer on NBC’s The Today show she identifies with being black because that is the way she has chosen to liver her life and present herself.

The former NAACP Spokane, Washington, chapter president’s take on racism has since led to many shaking their heads and condemning the woman for having had the bravado or gaul to live an existence that many have no choice but to accept despite the discrimination and historical vilification they have received as being a member of the African American community.

Others, including this author wonder, to what degree, Dolezal chose to charter the identity of a black woman in order to curry advancement that would not normally be in the offering for most middle class whites who are not rich or privileged, bearing in mind, that in some quarters (especially in the academics and the arts) being a minority can in fact serve one very well, and afford liberties and platitudes that one would normally only receive if they happened to be well connected and rich. An implicit overlay of the real conversation most media agents have tacitly ignored, the privilege of being white and the aspirations of many Africans to emulate privileged white lives or at the very least escape the disparagement associated with being a minority in America.

All things that Matt Lauer may have had (but this being corporate media very unlikely) in the back of his mind as he interviewed Dolezal.

Lauer: Your parents were asked this question this week. They didn’t have trouble answering it. They said, she’s clearly our birth daughter and we are clearly caucasian. That’s a fact. Your father said she’s a talented woman doing work she believes in. Why can’t she do that as a caucasian woman which is what she is? How do you answer that question?

Dolezal: Well, first of all, I really don’t see why they are in such a rush to whitewash some of the work I have done and who I am and how I have identified. This goes back to a very early age with my self identification with the black experience as a very young child.

From there we find out that being a particular race or identity is not a matter of being born into it but rather an issue of cultivating it, as Dolezal insists to the open mouth gaze of Matt Lauer who was gingerly stirring his chamomile tea wondering if it could all be true?

Which of course raises the question, who is to stop anyone down the street with identifying themselves as a red indian and appropriating benefits and platitudes that are reserved to those who the state deems are only available to those who are genetically red Indian?

That though oughtn’t stop anyone choosing to live their lives as they please and how they choose to identify with themselves and the public at large. After all one’s life is one’s own life to live as they please, irrespective of what others insist, demand and insist accountability for.

Except …that is when they choose to remain evasive, procure manufactured scripts, tainted images,  deceptive bylines to fit their perfected image of themselves and new found procured access and newly arrived station in life.

Never mind the inconvenience, that being black may have something to do with having to have either been born black, lived the black experience and of course not having the option to put away one’s ‘black mask’ at night and choose to role play another option when things get dreary.

An option technically Bruce Jenner can still choose to play should he ever get tired of being Caitlyn Jenner as he has still retained his male private parts which many men would argue define their masculinity whilst Jenner renounces his/hers, throwing into a loop what counts for gender identity whilst Dolezal throws us for a loop as to whether the notion of transracial identity is one that we ought to take seriously or not?

And yet at the end of the day perhaps we may have arrived at a situation where one’s race or preferred identity ought not bear that much consequence, which is to say if we can have a white woman (granted in appropriated guise) being the leader of a black movement, why not then a lesbian being the leader of a men’s movement, or vice to versa and ought we limit our understanding of what is possible to set scriptures? Assuming of course we all get over our adulation of white supremacy and resentment of it as well, which might deep down augment the real friction Rachel Dolezal’s story has thrust upon us.

Did nbc news neglect to ask Rachel Dolezal about how black she was when she sued Howard?