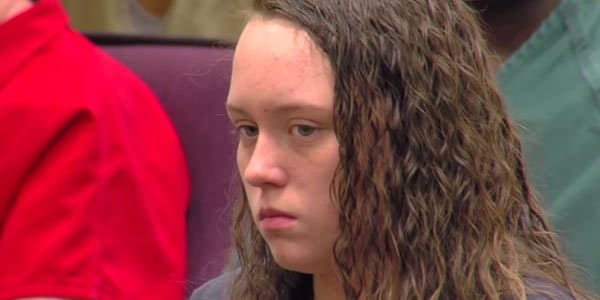 Meagan Grunwald, 18 has been found guilty of murdering a police officer during a January 2014 incident which saw one sheriff’s deputy dead and another critically injured as well as a 51 mile police chase.

Along with being found guilty of aggravated murder the teen was found guilty of eleven out of the twelve charges against her, including aggravated attempted murder of a second Utah patrol officer, Deputy Greg Sherwood and nine other charges in connection with the death of Utah County Sheriff’s Sgt. Cory Wride.

The only charge the jury acquitted the teen on was attempted aggravated murder involving a third Utah Highway Patrol trooper, Jeff Blankenagel whom prosecutors said was shot at during a high-speed chase on I-15.

Even though she did not pull the trigger, Grunwald faced aggravated murder because Utah law does not allow for aiding and abetting.

Here is the list of charges that #MeaganGrunwald faces. @fox13now #Utah pic.twitter.com/MiHCQ6Obe6

The verdict comes despite the then 17 year old teen’s insistence that she had no choice as she drove the vehicle that police gave chase to after her 27 year old boyfriend, Jose Angel Garcia-Jauregui fatally opened fire on Sgt Cory Wride after the detective first noticed their pick up truck pulled up on the side of the road.

Insisting that her boyfriend threatened to kill her and her family after pulling the gun now on the teen, Grunwald at the helm of the vehicle proceeded to lead cops on a 51 mile car chase which in the end led to her boyfriend being shot dead and Deputy Greg Sherwood critically injured after being shot in the head.

During testimony the court heard how the boyfriend shot a police officer after fearing that an outstanding arrest warrant might send him back to jail and how a gun ho teen ‘hell bent’ on proving her love for the man would do anything he wanted.

The court also heard how in order for her boyfriend to get a good shot at chasing police officers, the teen at one point applying the brakes so as to allow Garcia-Jauregui a better shot.

During the course of the trial, the prosecution argued, Grunwald, rather than being an unwitting accomplice was actually an active participant.

Offered prosecutor Sam Pead said during closing arguments Friday: ‘No obstacle is going to stop her from being with her man.’

Grunwald’s lawyer, Dean Zabriskie in turn argued that his client was simply a scared girl who had trusted a much older manipulative man and who was forced at gunpoint to do as she was told.

An argument that the prosecution argued time after time was riddled with inconsistencies and that the only person who could refute that she was forced into her actions was dead.

Meagan Grunwald, 18, is scheduled to be sentenced July 8 and now faces life behind bars.

#MeaganGrunwald‘s mother Tori in tears as she’s helped from the courtroom pic.twitter.com/QDUaEhE4Rp
— Spenser Heaps (@sheapsphoto) May 9, 2015

And then there were these arguments on the web that made me wonder. See what you think?

You know stupid is not necessarily a crime. She really is only guilty if she willingly helped her boyfriend commit the crimes. If she wanted to escape before any serious crime was committed, and was prevented from doing so, then she too is a victim, not an accomplice.

Of course she’s going to say he forced her to do it. She made one bad choice after another and someone ended up dead, now she has to deal with the consequences

This young woman is disgusting, and not a victim in any real sense of the word. I live in Utah and have followed this case, and she is only sorry for herself, and deserves a very long time behind bars to pay for her actions….

Did she do something wrong? Most definitely. Did this situation escalate rapidly? Yes. Did she have the life experience to deal with the situation? Definitely not. Was a significantly older hardened criminal she was in love with manipulate her? Probably.
The fact is, she didn’t kill the police officer or injure the other one. She did something wrong and should be punished.
SHARE
Facebook
Twitter