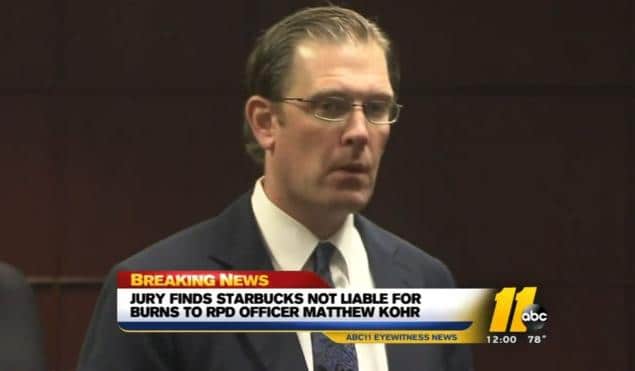 A North Carolina jury has ruled 10- 2 that Starbucks owes Lt Matt Kohr nothing after the Raleigh police officer spilled a cup of coffee that led him to suffering third degree burns three years ago.

In the police officer’s suit, Kohr had sought damages of up to $750K, claiming that the outlet was negligent because the lid of a free cup of coffee he got in 2012 popped off and the cup ‘collapsed.’

Kohr also claimed the incident caused such severe stress it activated his Crohn’s disease, which required surgery to remove part of his intestine.

Starbucks attorney, Tricia Derr in turn questioned the connection between the burn Lt Matt Kohr had incurred and what happened to Kohr after, questioning the motivations, diagnoses, and treatments of Kohr’s doctor, and questioning the basic premise that Starbucks was at fault.

Derr said Kohr drove home to have the injury photographed by his wife before he went to an urgent care facility more than two hours after he was burned.

In his defense Kohr testified he was not thinking about pursuing legal action at the time.

Reiterated the defense attorney: ‘Starbucks was not negligent,’

‘Starbucks served a product the way they always do and it did what it was supposed to do; it was a good cup of coffee. If the dots don’t connect and you don’t have the cause and effect relationship between what Starbucks did or didn’t do and what actually happened to Mr. Kohr, then they haven’t met their burden.’

Was the Cup Defective, or did Starbucks fail to properly secure the lid? It’s just common sense that if you accidentally dump a hot cup of coffee on yourself, it’s going to have negative effects.

At some point, WE MUST ALL take responsibility for our OWN ACTIONS and stop trying to blame others. My gosh, if I tried to sue the tool makers for every time I’ve skinned my knuckles while working on a car, I’d be the laughing stock of the community..

When I get coffee in a takeout cup, I make sure the lid’s on, pick it up carefully to feel its heft and balance, and treat it as if it were a cup of scalding liquid that can put me in the hospital.

My question is – if he went to the trouble to go home and have the injuries photographed, was it really that painful? Because I would’ve gone right to the hospital if I had such a severe burn. And another question – if you’re going to photograph the burn, why not photograph the so-called “collapsed” cup? I’ve gotten coffee without the cardboard sleeve and it’s been hot, but the paper cup was still strong enough to not just collapse onto itself.

Faulty coffee cup?!?!?!?  If nothing else, he is original.  Original but a moron nonetheless.  Give him a dozen donuts and call it a day.