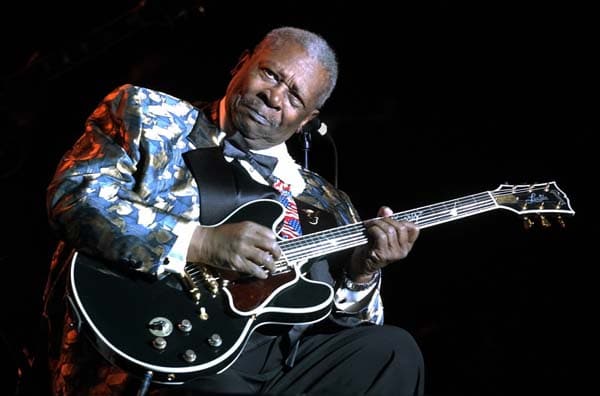 B.B. King daughters, Karen Williams and Patty King have alleged in filed documents that their father was poisoned by the rhythm and blue maestro’s business manager, LaVerne Toney and personal assistant Myron Johnson.

Responding to the accusations, Clark County Coroner John Fudenberg said on Monday that an autopsy was performed yesterday on King’s embalmed body, and that test results will take up to eight weeks.

The coroner would add that King’s body had been returned to a mortuary, and that the investigation shouldn’t delay planned memorials this week in Memphis, Tennessee, and Indianola, Mississippi.

According to a report via foxnews, Williams and Patty King – along with sisters Rita Washington and Barbara King Winfree, and brother Willie King – first raised suspicions last week during a viewing of King’s body.

They said Thursday that they didn’t think their father looked like himself.

Adding intrigue, Williams and Patty King accused King’s longtime business agent Toney of keeping them from seeing their father for a week after he died May 14 at home at age 89 — and of preventing them from taking photos of him in his casket.

Prior to King’s death, the musician’s health began deteriorating over the last year as he entered a home hospice two weeks before his death.

At the time AP reported that the doctors believed King’s ‘strokes resulted from reduced blood flow as a consequence of chronic diabetes — or unhealthy fluctuations in blood sugar levels,’ more than likely led to the musician’s death.

In recent years, Toney, who worked for King for 39 years, had retained power-of-attorney over B.B. King’s affairs and estate despite several court challenges by Williams and Patty King.

‘But that wasn’t Mr. King’s wishes. Mr. King would be appalled.’

B.B. King’s will, dated Jan. 18, 2007, and filed Wednesday under his birth name, Riley B. King, appoints Toney as sole executor of his affairs. Another daughter, Riletta Williams, was second in line, but she died last September.

Toney is banning the media and photographs of any kind during the public viewing from 3 to 7 p.m. at the Palm Mortuary on South Jones Boulevard.

Funeral director Matt Phillips said viewers will be able to file past the open casket and security officials will prevent photos.

Absent from the family’s allegations is King’s eldest daughter, Shirley King who has booked a Las Vegas Strip venue for what she said will be a free musical tribute event starting an hour after the public viewing ends.

‘I don’t want to be part of the argument over his life,’ said Shirley King, who lives in Chicago and performs as Daughter of the Blues.

Since the document’s filing this weekend, both Toney and Johnson each declined to comment.