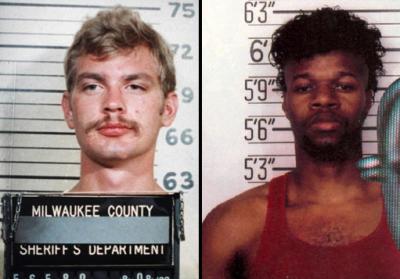 Prisoner and triple convicted felon Christopher Scarver has told in an exclusive interview that he killed serial cannibal murderer Jeffrey Dahmer because he found the serial killer’s sense of human morbid.

What specifically unnerved Scarver who was already serving a life sentence at Wisconsin‘s Columbia Correctional Institution when he eventually knocked off the newly arrived Dahmer in 1994 was the way serial killer taunted other prison inmates as he took to ‘fashioning’ severed limbs out of prison food.

Tells Scarver via the nypost: ‘He’d drizzle on packets of ketchup as blood,’

‘It was very unnerving,’

‘He would put them in places where people would be,” Scarver, 45, recalled in a low, gravelly voice.

‘He crossed the line with some people — prisoners, prison staff. Some people who are in prison are repentant — but he was not one of them.’

Scarver, who like Dahmer arrived at their new home in 1992 goes on to tell that he knew enough to ‘keep a safe distance from the serial killer.’

Scarver also notes that prison officials had trained a personal escort around the serial killer presumably because they were aware that the diabolical nature of his crimes didn’t sit well with other prisoners.

Tells Scarver: ‘I saw heated interactions between [Dahmer] and other prisoners from time to time.’

Loathe to risk becoming a target of Dahmer’s ‘sick humor’ Scarver explains how he purposefully kept his distance from the ‘whacko’ until a run on the morning of  Nov. 28, 1994.

It would be during coincidental prison errands in the bathroom that Scarver decided it was time to dish out street justice for Dahmer’s sick crimes and for the way he had murdered his victims.

Interestingly Christopher Scarver by then had begun keeping a newspaper article in his backpocket detailing how Dahmer killed, dismembered — and in some cases ate — 17 men and boys from 1978 to 1991.

It was at this instant that Dahmer purportedly poked Scarver who ‘was tending to duties’ who then turned only to see Dahmer laughing under his breath with another inmate.

Explains the nypost the step by step horror show: The three men then split up, and Scarver followed Dahmer toward a staff locker room.

Scarver grabbed a metal bar from the weight room and confronted Dahmer with the news story he had been carrying in his pocket.

“I asked him if he did those things ’cause I was fiercely disgusted. He was shocked. Yes, he was,” Scarver said.

“He started looking for the door pretty quick. I blocked him,” Scarver said.

With two swings of the bar, Scarver crushed Dahmer’s skull.

From there Scarver would dole similar punishment to the third man, who was serving a life term for killing his wife in 1992.

Initially pleaded insanity to the murders, Scarver later changed his plea to “no contest” in exchange for a transfer to a federal penitentiary.

He was sentenced to two life terms on top of the life sentence he was already serving after killing his former boss during a robbery in 1990.

Requests for comment by prison officials if Dahmer’s murder was an inside job has been continuously met with silence.

From there we find out that Scarver has been evaluated by 10 to 20 prison doctors but still doesn’t understand his mental issues, daring to wonder if prison food has led to his insanity.

Explains Scarver: ‘I found out in my own research what the problem is: Certain foods I eat cause me to have a psychotic break — bread, refined sugar,’

‘Those are the main culprits.’

Resigned to the rest of his life behind jail, Christopher Scarver spends his time writing poems for his site where he muses about life behind bars, redemption and the darkness of his being.

Scarver also has self-published poetry books for sale on Amazon. Poems that might stimulate you into another consciousness. Or not.