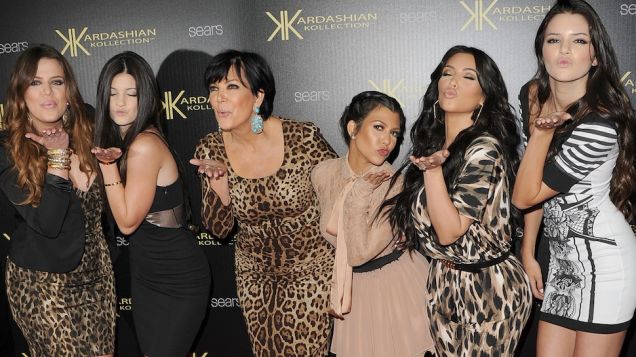 It seems America knows a good thing when it sees it. Case in point, uber reality show franchise, poking around the world and in my inner high net worth self, ‘Keeping up with the Kardashians‘ which has been signed on for four more years, to the collective benefit of the Kardashian clan who now stand to make $100 million to their stuffed bank coffers as the highest paid ‘stare at me all day bixches’ make believe concoction ever finagled in TV history.

According to E!, the new deal is being kept strictly under wraps (which is pr language for watch out for as many press leaks in the next 23 minutes as E! and its parent company Comcast set about making good on their investment/sham) as it explores revenue and expenditure details and what yummy season 10 surprises it has up its sleeve (see below).

Left out of the sham is Bruce Jenner who reportedly opted to sell out on his own terms with his upcoming hit tv reality show: ‘How I sold my sexuality for a dime and then some.’

Along with four more seasons of Keeping up with the Kunts, expect more spin offs, including Kourtney and Khloe take the Pissed off Hampton elite and other yummy adventures that E! bosses could dream of (here are my suggestions: Kim Kardashian and Kanye move in with Anna Wintour trifecta holiday special,

Kendall Jenner model lessons and tricks in the bathroom,

Khloe Kardashian becomes a gourmet chef thanksgiving special and loses all the weight next morning secrets,

Prompting the sign on was the family’s huge social media following which is expected to keep the world tuning in to the damning of American minds and hearts and the continual pandering to flash, fakery and the axiom: money does buy lots of happiness.

Isn’t it time you sold out and lived the (K)American dream too ….?