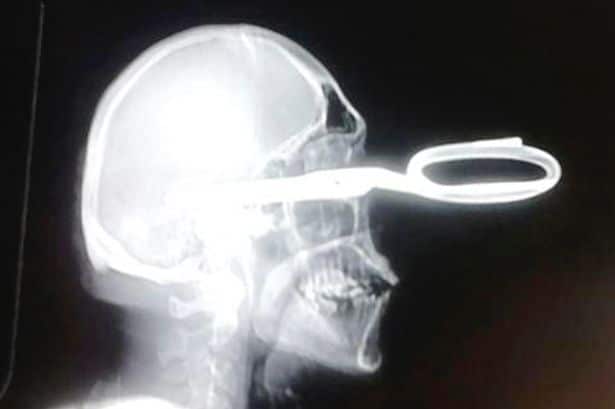 Staff at one local Mexico hospital this past weekend were left stunned after a blood soaked individual, Jonas Acevedo Monroy walked in and ‘politely’ explained he ‘had a small problem.’

What problem you wonder? The problem of a pair of scissors protruding lethally from his face after an incident just moments ago at a local Chihuahua bar.

Shit went down when Monroy had been having a drink with fellow patrons when suddenly one of the locals took umbrage.

Reiterated one of Monroy’s drinking buddies via local Mexican media: ‘He came over and started trying to wind Jonas up, but when that didn’t work, he started getting abusive and aggressive.’

In a bid to pacify the man, Jonas Acevedo Monroy  volunteered to to buy the enraged man a drink, but the agitated man wasn’t having it. Instead he produced a pair of scissors from his pocket and deposited them forcefully into the Monroy’s brain.

From there the attacker ran off while Acevedo Monroy’s buddy drove him to a local hospital, where the above X-ray was produced.

Told the man’s friend: ‘At first we thought it was some sort of joke, but then he fainted and we rushed him into emergency,’

‘He had been stabbed in the upper-left side of his skull and the scissors had penetrated his parietal brain lobe. He is lucky to be alive.”

Adding to the assaulted man’s friend, he shook the receptionist’s hand and, bloody pair of scissors still protruding from his head, said he ‘seemed to have a small problem.’

Yes I concur. If only we could all have such similar sense of fair sport. 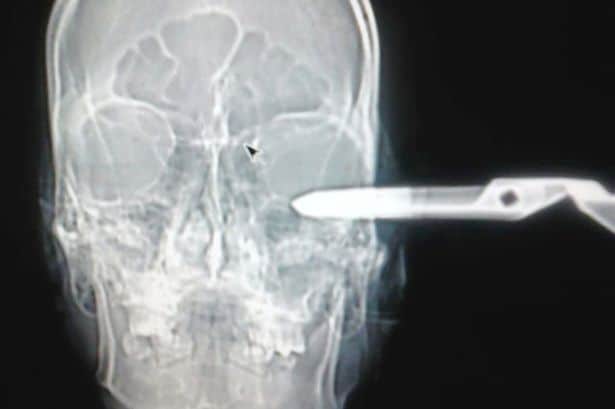