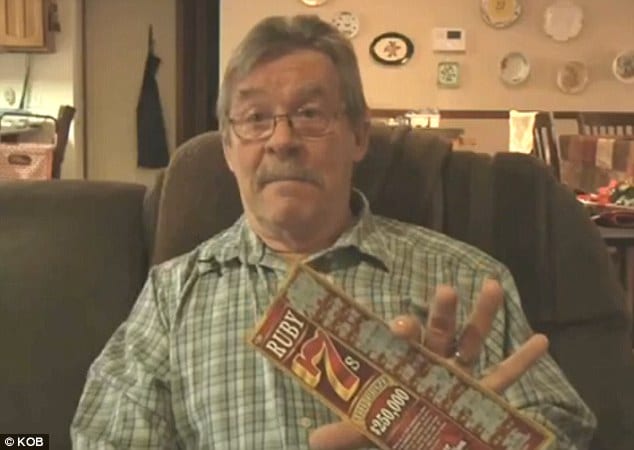 Of contention is whether New Mexico man John Wines should get to keep recent scratch winnings of $500 000 at a local gas station, despite state lotto authorities telling the ticket is void cause of a misprint?

At the time an incredulous recently retired John Wines thought he had just bagged $500K when he scratched off five winning numbers only to be told by the gas station clerk that New Mexico lottery officials had voided his win cause they said the ticket was a misprint.

In a released statement officials told that the maximum payout is only $250K which automatically voids the presumed $500K win.

Responded officials to an email that Wines sent seeking clarification as to why he would be deprived his winnings: ‘We did find a flaw in that particular pack of tickets and it’s been reported to our printer.

‘Thanks for bringing this to our attention. I did complete a reconstruction of your ticket and it was not a winner.’

That said, in a bid to make good, lottery officials doled out to an incredulous John Wines $100 in scratch cards. Scratch cards which one imagines Wines has contemplated burning in a bonfire.

Responded the despondent John Wines: ‘If you thought you won $500,000 and somebody tells you that you didn’t, and you can prove to them you did, it’s pretty stressful for somebody to say, ‘no you’re not getting your money’.

‘It’s like I told them, I didn’t misprint it. I bought the ticket in good faith thinking if I won I was going to get my money.

What do you think? Should lotto officials do John Wines good? At least cut him a $1000 check or is this just another lesson in the proverbial game of gambling: The odds of you ever winning are next to non existent, so just enjoy the gush and pretense of somehow winning and then having it all  forfeited should you win anyway …

And then there were these remarks on the web that made me wonder:

Clearly it was misprinted. When you can see a partial number, it’s pretty obvious that it wasn’t just a single number. Yes the lottery misprinted it but this is just someone who is trying to cash in on an obvious mistake. Now if there were no other visible numbers and he was told that it wasn’t a winner, that would be a different story. Just another person trying to get something for nothing.

if they knew the package of the tickets were mis printed then they should have recalled them ,instead they still sold them ,so pay up

If when paying a bill online instead of paying $1,000 you enter in $10,000 should the business keep the extra 9 grand? How about if the bank accidentally debits too much money from your account? If people are under the impressions that errors in their favor should always be honored, then errors not in your favor should also be honored.

Gambling is NOT an investment no matter what