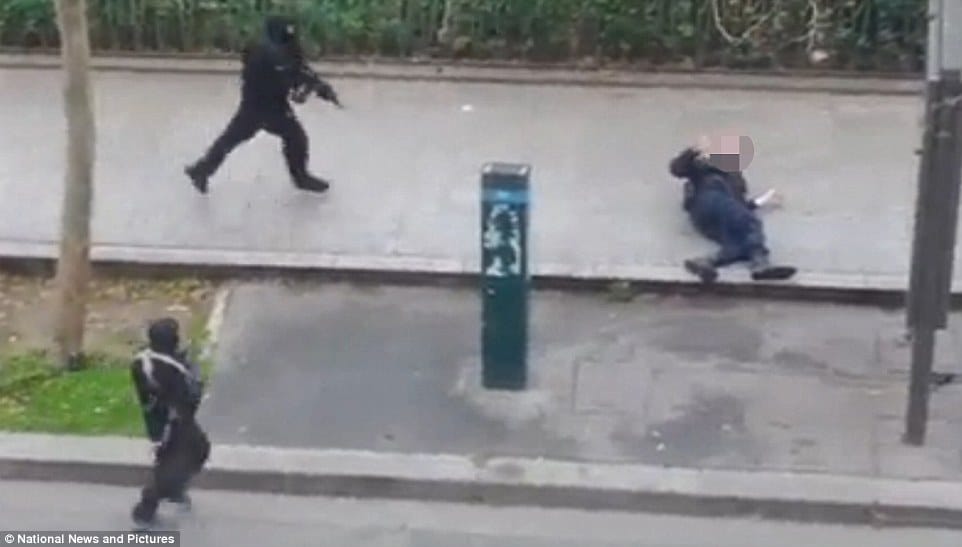 An attack on the Paris, France offices of anti Islamic satirical journal Charlie Hebdo has today claimed the lives of twelve individuals, including ten journalists, a secured police officer on behalf of the journal’s editor in chief, Stephane Charbonnier (Charb) and an attending police officer who was seen begging for his life on a street pavement before being shot point blank by a group who claimed they were avenging the honor of their Islamic faith.

At the time of the attack, masked attackers brandishing Kalashnikovs burst into the Charlie Hebdo headquarters, opening fire on staff after seeking out journalists by name.

Clad all in black with hoods and speaking flawless French, the militants forced one of the cartoonists – who was at the office with her young daughter – to open the door.

Witnesses said the suspected Al Qaeda gunmen were heard to shout ‘the Prophet has been avenged’ and ‘Allahu akbar!’ – Arabic for ‘God is great’ – as they stalked the building.

From there the militants headed for the offices of the journal’s editor and cartoonist, Stephane Charbonnier, killing him and his police bodyguard, who had recruited to protect him following earlier threats.

Satisfied, just as quickly as they had arrived, the men were then seen making their getaway but not before shooting dead an injured police officer slumped on a street pavement pleading for his life as the attackers hastened to their get away vehicle. 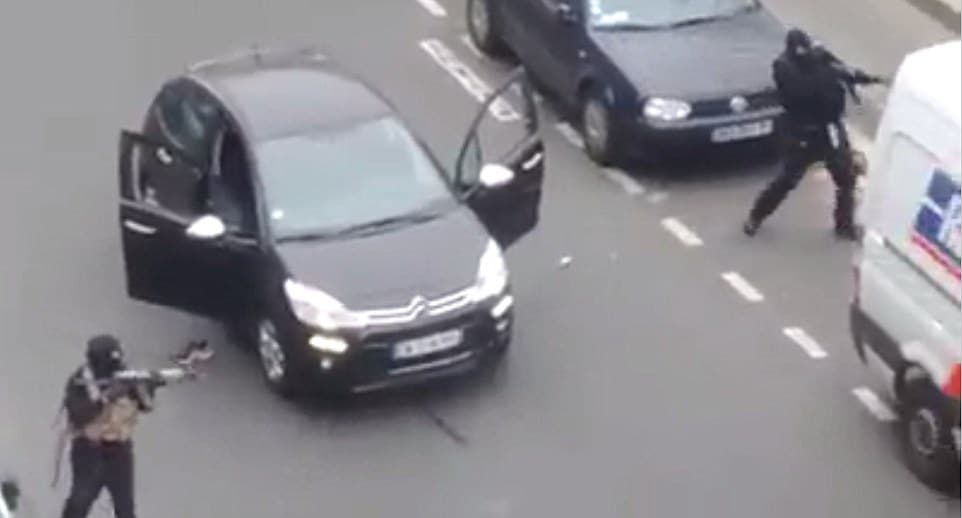 A black Citroen hatchback the attackers had used to flee the scene would later be found by authorities.

By midday, there were reports of up to 12 people dead and 10 wounded, four critically, including journalists, administrative staff, and police officers who attended the scene.

In the aftermath of the attack, world leaders, including France’s President Francois Hollande would condemn the attack, with Hollande describing the attack as a ‘barbaric attack against France and against journalists‘, ‘we are threatened because we are a country of liberty,’ before vowing to hunt down those responsible.

That though has also led to questions why had the outlet specifically been attacked and if whether despite the press’s freedom to express what they deem fit and appropriate it had tempted fate with its unrelenting provocative stance against Islam?

Today’s attack comes after Charlie Hebdo had previously courted controversy with its irreverent take on news and current affairs. It was firebombed in November 2011 a day after it carried a caricature of the Prophet Muhammad.

Pursuant to the attack, Charlie Hebdo’s website, which went offline during the attack, has taken to showing the single image of “Je suis Charlie” (“I am Charlie) on a black banner, referring to the hashtag,#jesuischarlie that is trending on twitter in solidarity with the victims.

Danish newspaper Jyllands-Posten, which published cartoons of the Prophet Muhammad in 2005 sparking riots in Muslim countries, says it has stepped up security in the wake of the Charlie Hebdo attack.

The Charlie Hebdo attack has once again fanned concerns as to the freedoms of the press, its autonomy and its ability to ought to be able to challenge and explore as it sees fit against those who take the press’s rebuke or expression too personally, a sentiment that most magazine editors (including this one) are forever constantly aware of as they push to express views and ideas that they sometimes wonder may literally get them killed by those who take deep, cowardly offense and resort to gutless reprehensible acts against them.

Ironically the police officer killed in the attack has been named as Ahmed Merabet, a Muslim.

Satire must always accompany any free society. It is an absolute necessity. Even in the most repressive medieval kingdoms, they understood the need for the court jester, the one soul allowed to tell the truth through laughter. It is, in many ways, the most powerful form of free speech because it is aimed at those in power, or those whose ideas would spread hate. It is the canary in the coal mine, a cultural thermometer, and it always has to push, push, push the boundaries of society to see how much it’s grown.

These people are not just enemies of cartoonists or the ideals of the West. They’re enemies of human life. They care for nothing, believe in nothing worth believing in, and therefore their ideology, whatever it may be, is worthless. Moot. Not even worth our consideration for a moment.

Civilization is on the defensive. Politicians are afraid; the people cower. Now what? Does the liberal West, including the USA, possess the will to win?

Who dares publish anything now? More censorship in an already highly censored media format forever mindful of what is likely to offend, rattle and now potentially get one killed.

Islam is not a small religion. Islam is Gigantic and colossal.

So, regardless of the violent reaction the newspaper’s prior, dubious choices in disregarding Islamic sensitivity…they decided to stick another red flag in front of the bull again?

Sounds like they got what they were asking for. What was their cover last week?

Like when a woman gets raped because her skirt was short. Totally asking for it.

Tolerance is a useful word. It implies that we accept the rights of people to do, say or believe things that we neither agree with nor like as long as they don’t break the law or incite others to do so. Asking people to celebrate difference is a step too far.

Freedom of the press is not without some caveats. While the old expression, “Sticks and stones may break my bone but names never hurt me.” may ring true, it is also true that one must consider the one receiving the name. In this case, it is well known that insults can result in deadly retaliation when it comes to Facets of Islam. These cartoonists presumably were aware of the danger to which they exposed themselves. It is tragic that the danger amounted to their deaths. It remains to be seen if this incident will stop the lampooning of Islam or increase it.

Does freedom of speech include the right to be deliberately insulting and offensive? Whether it does or not, is it desirable? All nations are now multicultural. We all have various sensitivities. Are we not obliged to honor and at least work with those sensitivities? Should we not use some judgement in what we say and to whom we say it? Otherwise, it seems, mayhem and chaos will rule the day. Deliberately offending others with whom we share the planet is perhaps not such a good idea, especially when those others are sensitive and reactive in the extreme.

If the press took everyone’s sensitivities into account, we wouldn’t have a free press. Just like in academia, exposure to viewpoints that one doesn’t agree with is vitally important for societies to move toward a more progressive and informed future. Deliberately maintaining silence on a topic is the first step toward a controlled press, whether the topic is inflammatory and offensive or not.

At some point, we need to stand up for the civil liberties and human rights that are fundamental to our values. Those values are not racist; they do not undermine religious freedom and tolerance, and they do not oppress ethnic minorities.

Those values are about every individual holding certain fundamental rights by virtue of them being human. Rights to life, to liberty, to freedom of movement and assembly. Rights to choose who one marries, or whether one even marries at all. Rights to not be tortured or harmed. Rights to express oneself, to determine one’s own religious belief, to freedom of thought and conscience.

Until we remember how central those values are to our society, and how dear we must hold and protect them, these horrific attacks will go on.