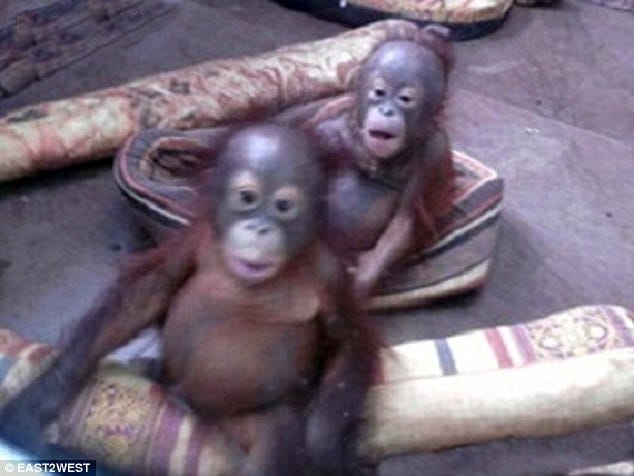 Have you ever contemplated nonchalantly hanging with your baby orangutan plaything pet? Smiling, feeding it, making it do its usual clever tricks, listening to all your woes? Never mind, Russia’s super rich have and they’re willing to pay big bucks for the privilege.

In a report via the UK’s dailymail, the endangered creatures are said to be reared for the shocking price of 24K pounds ($35K USD) despite strict international rules outlawing the sale of the endangered species.

Reports the dailymail: With very little regulation and a myriad of legal loopholes, a booming animal trade has grown with a shocking selection of animals – from macaques to falcons – being offered up for sale over the internet.

At a ‘nursery’ called Exotic Zoo in Desna village outside Moscow, MailOnline was offered an orangutan for two million roubles (£23,845).

Interestingly dealers insist they have ‘all the necessary documentation’ whilst imploring the animals make ‘ideal pets’ because they mimic their owners, ‘won’t bite’ and can be dressed in clothes and nappies. 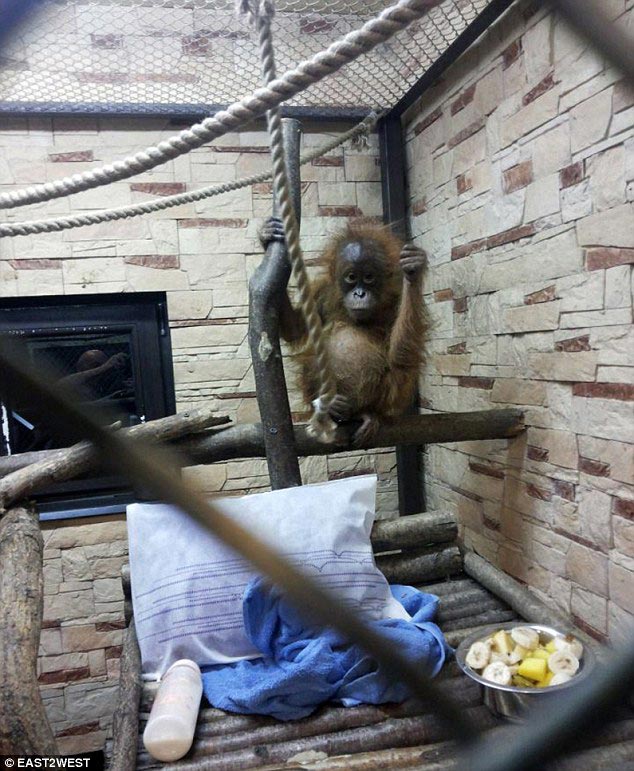 The report tells how one dealer ensures potential customers that all the animals ‘are born in the nursery under supervision of experienced professionals’ and that they are regularly checked by vets. Whilst other vendors stress that they are the only legal nursery with the ‘appropriate licenses.’ An impossibility given the fact that such licenses are expressly forbidden.

Offers one sales pitch: ‘Our animals are born in Russia because we are a nursery, this is why all their documents are in order,’

‘When you buy an animal from us, you get its international passport and all the necessary veterinary documents.

‘Having all these, you can easily travel with your animal wherever you want – around Russia or even abroad if you need it.

‘Our monkeys have electronic chips in their bodies with international numbers, they can be easily identified if necessary.

‘This is why our monkeys and other animals are quite expensive but if your client is serious, he would understand the difference.

‘We have been in this business for many years. We have co-operated not only with private clients but also with zoos.

‘We will give you all necessary recommendations how to take care of the animal.

‘We will stay in touch if you need any help in the future.’ 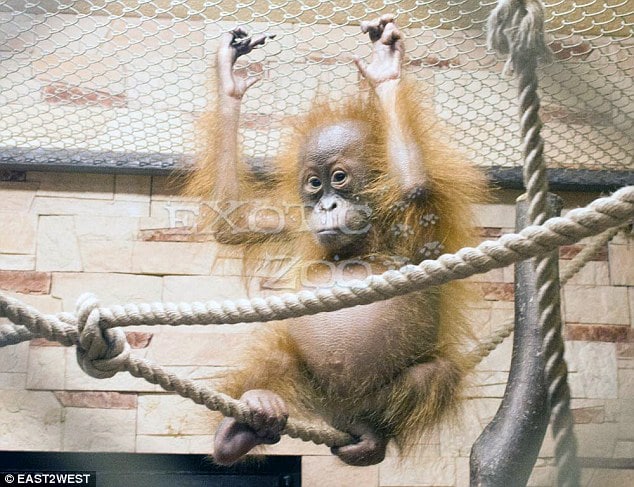 Russia is a signatory of the Convention on International Trade in Endangered Species (CITES) which prohibits their unlicensed international trade, notably for ownership by private individuals.

That said, Russia’s own laws do not impose curbs on nurseries which conduct their own breeding programs of these rare animals, nor on sales of the resulting animals to wealthy people wanting exotic pets.

Even where there are penalties relating to the movement and ownership of endangered animals, the fines are too small to act as a deterrent.

Anna Filippova, a campaigner for IFAW Russia would offer: ‘There is a colossal, large-scale problem.

‘Primates, parrots and reptiles are in the greatest demand among the animals traded via the internet.’

So any publicity that throws a spotlight on the distasteful practice is unwelcome and may prompt a crackdown. 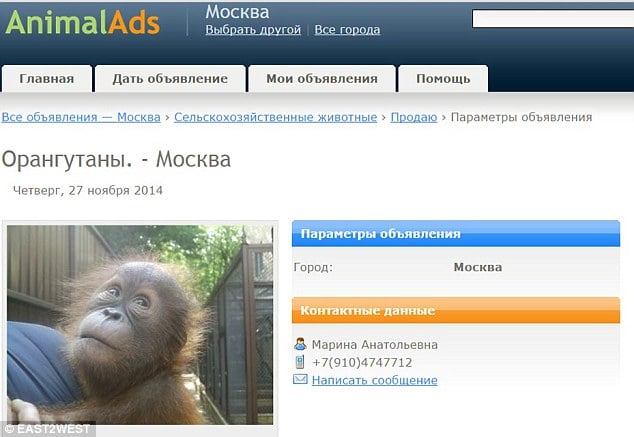 MailOnline would also discover a number of web adverts for orangutans in Russia, as cited below:

– ‘For real connoisseurs of exotic animals. Offering an orangutan primate. Orangutans are very smart animals. In their natural habitat they use tools, in captivity they pick up the human traits and try to resemble their owners. One year old male and female available. Social, playful.’

– ‘Offering very kind and playful baby-orangutans. These primates resemble humans and will be perfect for a mini-zoo. Not only a smart, unique, and intellectually developed animal, but also a full family member and friend who will always cheer you up. To find out the price and the procedure to buy the animal call…’

– ‘Orangutan for sale. Male and female available. Passport, all documents, everything proper. Shipment to different regions.’

– ‘Exotic monkeys for sale. Always available, males and females. Only legal. All animals were born in the apery, healthy, and taken care of by professionals.’

Phone numbers posted by advertisers are regularly changed (can anyone guess why?).

Reiterates Anna Filippova: ‘Most often the exotic animals are bought to be used for commercial purposes – for example, for taking photos, which is legal.

‘Or they are kept in menageries (a small collection of exotic animals) – which are still legal in Russia, even though we live in the 21st century. But these breeding centres are not licensed in any way.’

Filippova further explains there are a number of ‘nurseries’ or ‘foster care centers‘ around thirty to two hundred miles from Moscow.

Adding that many animals arrive in Europe through illegal or legal means and are then transported via Turkey and Ukraine to Russia.

‘There are all sorts of ways that animals are smuggled in. There was a case in the Far East (of Russia) when baby turtles were attached to the bottom of a car with sticky tape,’ she said.

‘Only 20 per cent of the animals survive the journey but that’s enough to pay off for the expenses in this trade.

‘If it is a big primate, it is brought to Russia as a cub. The customs authorities shut their eyes to it, which is in a way understandable. It is not clear what they can do with an animal if they impound it.’

She added that if an animal is taken out of the wild and put in a zoo legally because of injury or the destruction of its habitat, there is nothing in place to regulate its offspring being sold on.

Legislation is a ‘huge black hole’, she said, adding that there is no specific laws which govern the breeding centres or the conditions that the animals should be kept in.

Anna Filippova added that owners can ‘show any sort of printed paper to prove that an animal has legal origins’. 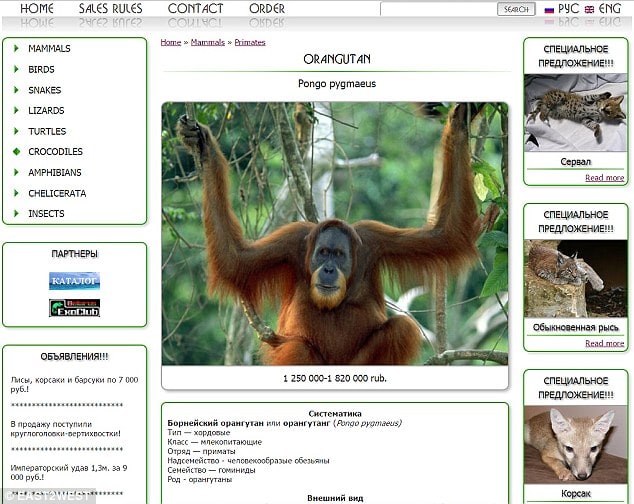 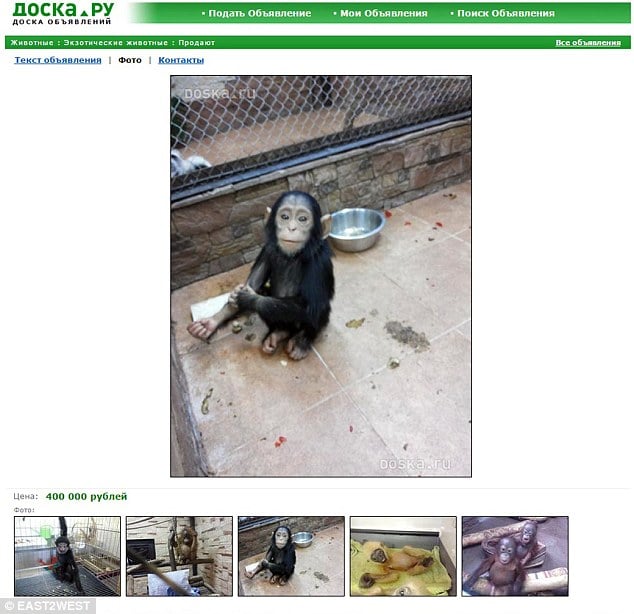