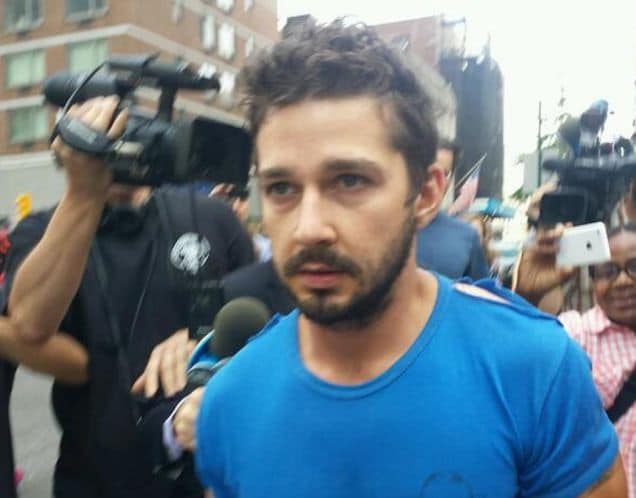 Shia LaBeouf has plead guilty to disorderly conduct pursuant to an erratic episode which saw the troubled actor acting out in a wild tangent along the streets of Broadway’s theater district this past June.

Shia LaBeouf reluctantly checks into rehab cause he knew he had to.

Appearing forlorn and presumably hoping to eke out an air of respectability the 28 year old actor took to a Manhattan courtroom this morning wearing a clean sharp suit, along with his trademark scruffy beard. A far cry from the disheveled t -shirt and jeans the actor was wearing when he went on his lunatic rampage, save for the scruffy beard which may have been the actor’s subconscious appeal to remind us deep down at heart he will always be a disaffected scoundrel who just doesn’t quite know how to fit his tender soul within the parameters of a sleazy Hollywood.

Looking deep into the eyes of the actor, the presiding judge told our collective hero (close up on the twinkle in the actor’s eyes as the searing background music switches to overload) that if Shia remains in alcoholic treatment for three months and stays out of trouble for six months, he’ll be able to withdraw the plea and presto all the inconvenient nonsense will be dismissed. Failure to put the good shit away will lead to the actor having to spend up to 15 days in the slammer.

Since the fracas, the actor’s publicist has told the mayhem stemmed from the actor’s increasing reliance on alcohol.

The publicist would further note that the actor hopes to put the episode behind him. Switch to sprawling view of Hollywood and Shia Labeouf stoically looking out beyond the hills….