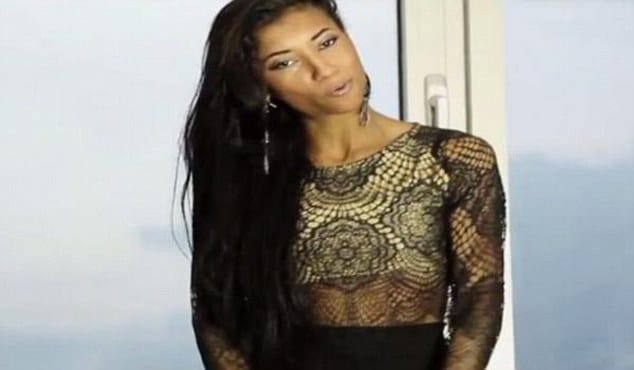 Social media has cried foul with Olivia McFallar, Jay Z‘s supposed mistress after the former model took to releasing a song aimed at Jay Z and Beyonce who are rumored to be on the outs.

The latest single comes after the aspiring singer made claims in an interview in August 2013  that Jay Z tried make her his mistress.

In the song, Olivia McFallar makes several references to what allegedly happened between her and Jay Z as she describes how he allegedly tried to make her his ‘in-town chick’.

The rapper also makes references to some of the couple’s most famous song lyrics as she raps: ‘You actin’ nonchalant for the audience / ‘Cause I ain’t just another shorty you put the naughty on’.

She also rhymes: ‘I’m ringing the alarm ’cause I overstand / And girls can’t run the world fighting

In her original interview with PNC radio, the former model said: ‘I could have messed with Jay, but got respect for Bey.

‘We were on the same set of a commercial, see, I was sitting by myself, and he sat next to me. I was handling it well, and he was shocked to see, I was getting up to leave, he sent his guards to me.

‘Excuse me Miss, do me a favor, put your number on this piece of paper. When Jay get settled and he’ll call you later. I know most chicks would have took the bait, but then those chicks be the ones I hate. I wonder to this day if I’d have gave it up would it be me on stage throwing it up!’

But that shit probably pales to the closing lyrics of her new grab at anything that smells money song as Olivia sets about teaching Beyonce on how to be the woman she ought to really be (like Liv) for her man. Cause Liv as you all understand has bundles of respect for Beyonce…

listened to the “Beyoncé diss track”,”sorry mrs. Carter”by yes liv can. it was embarrassing. Stay in ur lane that’s Queen B ur talking about

Since when did side chicas become so bold? I blame Scandal! I feel bad for attention seeking sidechicks like @yesLIVcan #SorryMrsCarter