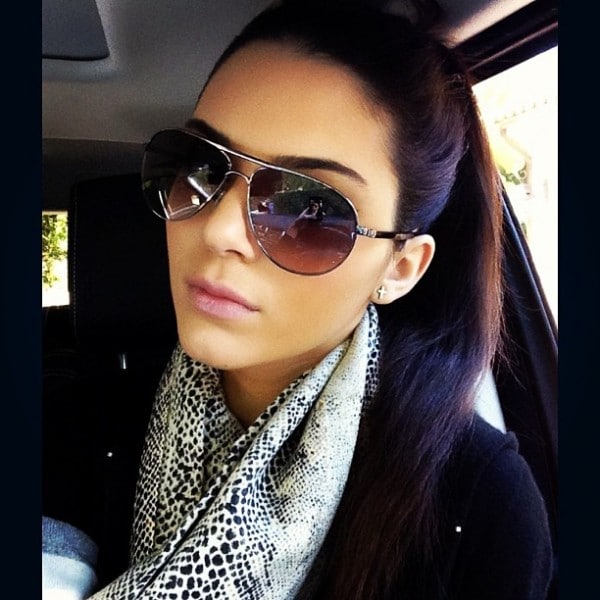 Kendall Jenner at the tender age of 18 has come to understand her economic viability rests on her ability to be seen as a good sport, as a reasonable alternative to her elder grotesque money, fame hungry merchandising regurgitating sisters, as a pixel of integrity, as an avatar of good will. Shit that she never had in the first place but shit she threw out the window last week after Mercer Kitchen waitress, Blaine Morris was forced to run after her majesty after her majesty did a fast one on her lunch bill.

Kourtney Kardashian bails on her tip, Hamptons hates her guts

At the time it was all a misunderstanding, Kendall Jenner would explain through her publicist who would then explain to a media outlet (and this kids is how media outlets are given access to the shenanigans called celebrity fodder, they compromise journalistic integrity and become de facto public relation outlets for said punk celebrities) that shit was just a misunderstanding and that for some reason or another Kendall had assumed her $60 lunch was on the house.

Of course nothing was on the house but on the waitress which led to the media world dizzily pointing its finger at Kendall Jenner, reminding us all, that at the end of the day, no matter how much she tried, no matter how many fashion designers she bribed to work for, she was deep at heart, a self entitled media whore. Like her sisters, Kim, Khloe and the other one who I forget.

Back to Kendall Jenner. After a severe tongue lashing by pimp momma Kris Jenner, Kendall decided she had to try a new tact. Last week, Kendall threatened to sue the waitress for lying, but somehow that suit never materialized and probably never will as the media once again told Kendall to put a sock in it.

Nevertheless reminding us that Kendall Jenner is more savvy than us mere mortal media types, Kendall took to going out for dinner over the weekend with her friend Hailey Baldwin and Hailey’s father, Stephen and spending a mega $554 on lobster yummies. Things that you and I used to be able to do when we were 15, 16, 17 and 18 years old. Right?

After Kendall ordered herself a big pony bill, Kendall then dropped a $160 tip on that sucker and then photocopied the receipt and sent it to her publicist who quickly and desperately found a willing media agent to go along until we were all forced to take notice and state the obvious:

wwtdd: An innocent person might normally apologize for any misunderstanding and maybe Tweet out the name of the restaurant and say how awesome the squid ink pasta was. A guilty person might overcompensate by immediately heading out to dinner again with the same friend, paying a large tab, leaving a noteworthy tip, and then having their publicist leak this information to media outlets that exchange journalistic integrity for celebrity access. The rest of her family seems to understand these overt acts admit guilt, which is why you don’t see Kris Jenner showing up to Fred Goldman’s house with a tray of fruit danish offering to help fix the rain gutters

Nevermind by the time Kendall Jenner turns 19 she’ll have mastered the art of using the media on how to really pull the wool over our eyes.

Don’t you wish you were a Kardashian too?