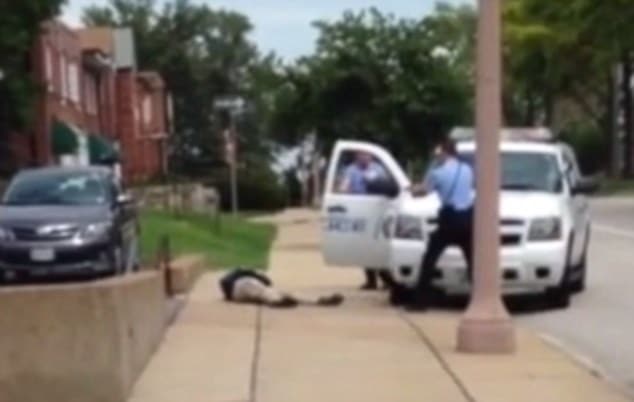 Since the release of video (see below) of the Kajieme Powell shooting at the hands of St. Louis Police Department questions have been asked if attending police were trigger happy when they shot the African American 25 year old man dead?

The shooting came to happen yesterday after cops received a call that a man had just shoplifted from a local convenience store. At the time Powell had been pacing along a sidewalk, carrying a knife when cops came to avail the suspect.

As cops get out of their vehicle, Kajieme Powell can be heard on video shouting, ‘Shoot me now. Kill me now.’

Asked to put his weapon down, Powell takes to approach the attending officers with both his hands by his side, by then a distance of 12- 15 away from the two cops remonstrating him. A stark difference from the 3- 4 feet cops had initially claimed before they had fired at the suspect. It isn’t until 12 seconds later that cops then lobby a total of  dozen bullets in the suspect’s direction, killing him instantly.

The whole incident, from the time officers arrived to when they began shooting, lasts only 15 seconds.

Of worthy note is that new video released, cops had also initially told that when they arrived on the scene Kajieme Powell had been wielding a knife in an overhand grip. A contention that contradicts St. Louis Police Chief Sam Dotson initial contention.

It is also worth noting in the video, several other people are seen standing near Powell not appearing to be in any fear for their lives. 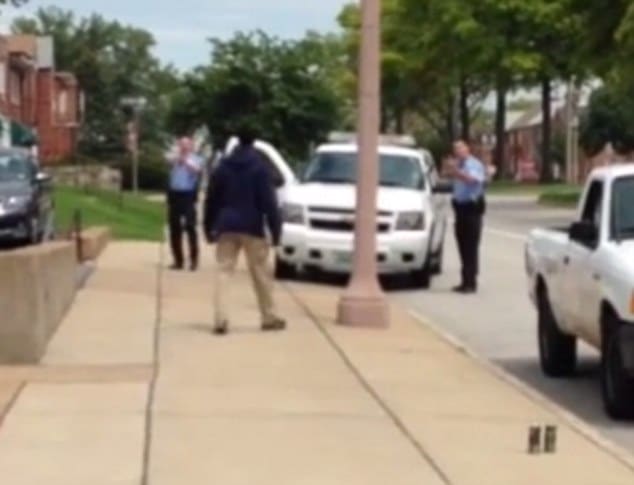 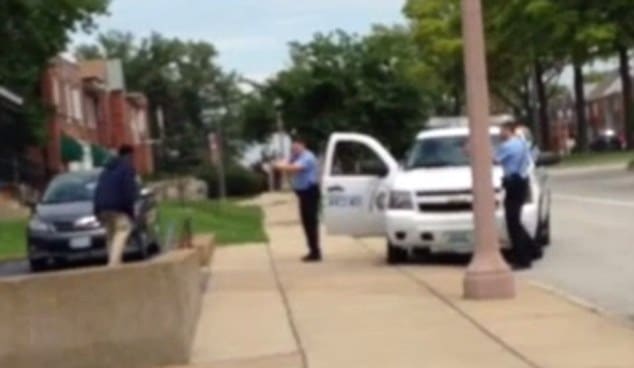 On any other day, the shooting would most likely be swept under the carpet, but yesterday’s shooting came to happen only three miles South of Ferguson, Missouri, where 18-year-old Michael Brown came to be killed by a white police officer, Darren Wilson, less than two weeks prior. A shooting which has since led to wide civil unrest.

In an interview following the release of the tapes, Chief Dotson defended his officers’ actions, acknowledging the discrepancies in his Tuesday briefing and what the video shows.

‘The officers did what I think you or I would do, they protected their life in that situation,’ Chief Dotson said.

Asked why the officers hadn’t opted for an alternate form of defense like a Taser, Dotson replied: ‘Certainly a Taser is an option that’s available to the officers, but Tasers aren’t 100 percent.’

When pressed by CNN’s Don Lemon about the need for officers to exercise lethal force, Dotson replied: ‘In a lethal situation, they used lethal force.’

Lethal situation or not, one can’t help but wonder why cops acted so quickly, if they seriously believed they were in imminent danger, harbored prejudice against the assailant, whether they could have resorted to a taser gun, shooting at the suspect’s legs or simply chosen to talk to the man. All things that seem sensible now but perhaps dubious in the heat of the moment and when there is the possibility that one’s life could potentially be lost at any given moment….

Then there were these reflections on the web that made me wonder:

Do you think if someone says “shoot me”, the police are bound to comply?

because of the rules and training the police had, in this specific situation, they did what they had to do. Also, this puts a face to the tragedy. I know people like Kajieme. This was a human life, he was not going to hurt those men, I believe it in my heart, he was there to hurt himself. But he walked towards them with a weapon and they were trained to shoot centre mass, to kill. That’s messed up and it needs to remedied. But in that moment, they could only rely on what they were trained to do. If this happened in the UK or the Czech Republic, Kajieme would still be alive.

I would be inclined to believe use of a taser would be unwarranted in this situation.  The man clearly did have a knife; he clearly was approaching the cops in an aggressive manner; and his words “shoot me mothereffer” clearly indicated he wanted the cops to shoot and any reasonable person would believe he was intent on getting that outcome — even if he had to kill a cop with his knife to do it.  The problem with a taser in this situation is that it would be highly risky in this situation to employ.  The man is wearing a sweat jacket and firing a taser at him would have a high probability of failure.  The taser requires metal barbs to penetrate into the man’s skin in order for them to work.  Hitting the loose fitting sweat jacket would likely keep one or both of the barbs from contacting the man’s skin and so the taser would not work and then the man would be right on top of the cop with his knife.  I just don’t see any better way to handle this.

However, I am disturbed that at least three MORE shots were fired at the man AFTER he was CLEARLY on the ground from being hit from the initial gunfire  — how can a cop claim fear for his life from someone LAYING on the ground?  It may be possible the man could have lived if not for the coup de grace shots point blank at him as he lay on the ground.

The only reason the St. Louis police department is being as transparent as they are in relation to this incident is because of the individual who taped and posted the video on YouTube. Had this person not posted the video, the PD would have moved forward with the original report, which was clearly inaccurate. Look at the logistics of the situation – two officers. Ample opportunity for one officer to utilize a taser whilst the other covered them with a gun.

Mentally unstable man with a knife is shot by police. This does not really bother me that much.