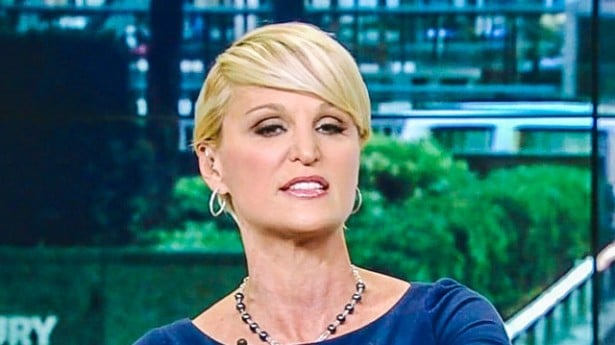 In another show of why we ought to live in a police state (do we already?), Fox & Friends host, Juliet Huddy went on a crusade yesterday morning to convince us that perhaps Ferguson cop,  St Louis, Missouri police officer Darren Wilson, whose actions have since resulted in a week long riot in St Louis was correct in shooting dead unarmed African American teen Micheal Brown.

Since the August 9th fatal shooting, many in the community have been outraged, pointing to the notion that the shooting was race related and portending of racial profiling and stereotyping. All issues that Fox News host, Juliet Huddy swept under the table (yes there are editorial edicts that one is obliged to follow in corporate media) as she went along with the ‘interesting‘ theory that maybe Officer Darren Wilson was right to shoot Michael Brown given the fact that officers at the time were on the hunt for a local black youth that had been involved in a burglary moment before. All things that Officer Darren Wilson had no knowledge of before he took to shooting the teen anyway.

That though didn’t stop Ferguson police department from releasing a tape of Brown being involved in an incident moments before where he purportedly strong armed and stole cigarettes from a convenience store. Which is to imply that cops may have been correct to shoot dead the unarmed teen cause Brown once and for all was proven to be a thug and worthy of being assailed any which way.

Reiterates raw story: On Saturday, law enforcement sources told NBC News that the Department of Justice had asked Ferguson police not to release the video over fears that it could inflame protests after Ferguson Police Chief Tom Jackson admitted that the officer who shot Brown did not know he was a suspect in the robbery.

Nevertheless instead of listening to common sense, Ferguson police department’s decision to release the video only inflamed the community who once again took to another vigil of protests, infuriated by the gall of Ferguson police department to insinuate that perhaps a robbery down the street had anything to do with Michael Brown’s complicity (never mind the fact that at that moment he was unarmed and simply going about his personal affairs or for that matter according to witnesses not once a threat to officers) save for the obvious inconvenience that both individuals were urban, black and likely up to no good, as we must all come to believe given the preferred logic and fear we all ought to have with African American youth. Again corporate media knows how to spin you into a cacophony of fear and repression with the slightest whiff of inertia and community prejudice.

‘They felt that it would anger the crowd, which I don’t understand.’

She continued: ‘Had that tape been out there, had crowd realized that this man might have been robbing a store, there might have been something else criminal going on there, you know, to lend credence to the fact that maybe in some way — we don’t know this — but maybe this officer was justified, maybe this was a bad guy, maybe he wasn’t the ‘gentle giant.’ I’m not saying that’s what it was.’