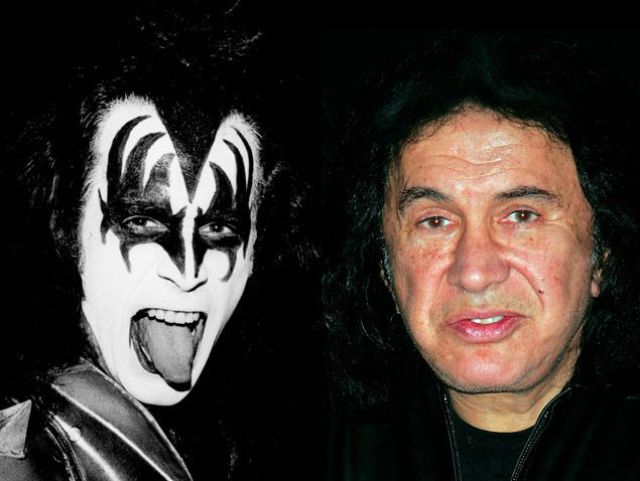 Gene Simmons of Kiss rock band has found himself in a public relations guffaw after comments he made regarding depressed individuals should commit suicide less than two weeks before actor Robin Williams suicide came to be picked up.

The controversy came as the 64 year old rocker took to speaking with Songfacts.com on July 31, where he told those with suicidal tendencies should just get on and kill themselves if they’re standing on a bridge getting ready to jump and that he’s be the first one to ‘call them on their bluff.’

Asked by the program’s journalist Roger Catlin if Gene Simmons still kept in touch with original KISS members who left the band over the years, Simmons responded:

‘No, I don’t get along with anybody who’s a drug addict and has a dark cloud over their head and sees themselves as a victim. Drug addicts and alcoholics are always: ‘The world is a harsh place.’ My mother was in a concentration camp in Nazi Germany. I don’t want to hear f**k all about ‘the world as a harsh place.’ She gets up every day, smells the roses and loves life. And for a putz, 20-year-old kid to say, ‘I’m depressed, I live in Seattle.” F**k you, then kill yourself,’

But that was just the introduction of Gene Simmons feel good for you and me life.

Went on to tell Gene Simmons: ‘I always call them on their bluff. I’m the guy who says ‘Jump!’ when there’s a guy on top of a building who says, ‘That’s it, I can’t take it anymore, I’m going to jump.’ Are you kidding? Why are you announcing it? Shut the f**k up, have some dignity and jump! You’ve got the crowd.’

It wouldn’t be until Robin Williams suicide, thought to be the result of deep depression that the actor was suffering that commentators would begin to have a second look at the aging rocker’s recent comments, with some wondering if the ageing rocker had gone on a ‘shocking tangent’ cause he sought relevancy as his star has come to fade.

Told Sixx: ‘It’s pretty moronic because [Simmons] thinks everybody listens to him, that he is the God of Thunder. He will tell you he is the greatest man on earth, and to be honest with you, I like Gene. But in this situation, I don’t like Gene. I don’t like Gene’s words,” Sixx said. “There is a 20-year-old kid out there who is a Kiss fan and reads this and goes, ‘You know what? He’s right. I should just kill myself.’

Adding: ‘For people who are depressed, there is a way out. There are many, many ways out…Don’t listen to people who don’t know what they’re talking about.’ 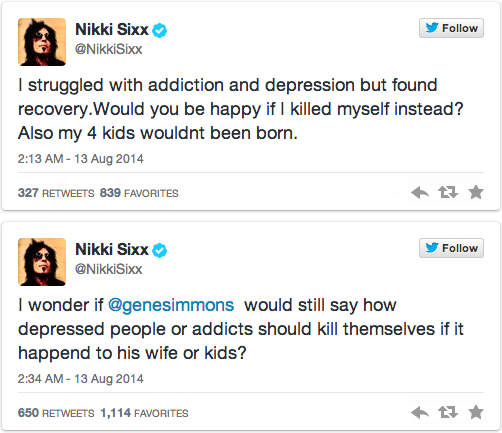 Also taking umbrage with the rocker was local Sydney, Australia based radio station, Triple M, known for its decades of support of rock and alternative music, where the outlet came to announce yesterday that they would be removing all KISS songs from their playlists nationwide.

Adding: ‘Depression and suicide are not topics he should be using to further his notoriety or sell records. His desperation to use mental health issues to find relevancy in a modern age is sickening. I can only put it down to a brain fade on his part. The Triple M Network can’t and won’t be playing or supporting this d***head’s music. I put the challenge out to other stations across Australia and North America to also drop any of this nudnik’s songs until such time as he reconsiders his thoughtless and insensitive position.’

As news of Simmons’ comments spread, twitter went to work having the 64 year old for dinner: 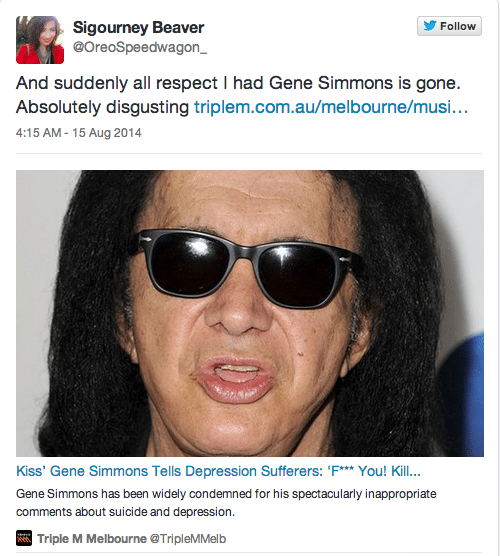