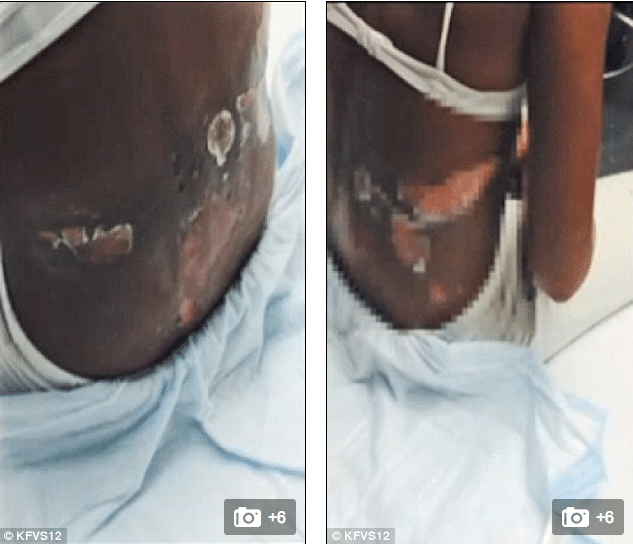 The trend which sees people (often teenagers) pouring alcohol on themselves and then setting themselves on fire for a dare (when I was a teenager we used more mundane dares like spinning the bottle) and then posting such videos on social media has led to Daisy Schumer suffering burns to her back after an ill fated attempt to join in the burgeoning trend.

Told the 12 year old via KFVS 12: ‘This person poured the perfume on my stomach and then I told her to stop and then she lit the lighter and I was rolling on the ground trying to get it out and it burned my back.’

The incident comes after an earlier incident this week which saw a Kentucky teenager suffering second-degree burns after also copying the new trend.

The 15-year-old, who declined to be identified for WKYT, poured rubbing alcohol over his chest and filmed himself last Friday.

He told the news organization: ‘I just poured alcohol on it, and lit it, and it just automatically went and burst.’

Firefighters arrived at the home of the boy’s aunt and took him to hospital for treatment for severe burns on his chest and abdomen.

The  teenager would incredulously tell that he had no idea of the likely effects because in the videos he had seen, the person who did the ‘fire challenge‘ never kept the camera running long enough afterwards.

Perhaps to underscore the severe risks associated with the Fire Challenge a series of youtube videos have been posted showing the inherent risks that actually exist in such ‘dares.’

Sample videos reveal young men either using an aerosol canister or alcohol as an accelerant and then lighting their chest, legs, arms or even genital areas.

Most scream and shout as the flames ignite and thrash wildly to put the fire out while friends who are filming laugh out loud.

Others undertake the challenge in a shower, with close access to water should they need it.

Offered Battalion Chief Mark Starnes who tended to the rescuing of Daisy Schumer: ‘These kids are starting to challenge themselves more and more in a very dangerous way,’

‘We are starting to get more and more people that are confirmed going to the ER and we’ve had one confirmed death.’

Daisy Schumer has since reiterated that her summer has changed from playful to painful after finding herself ‘all bandaged up and now there’s lots I can’t do.’