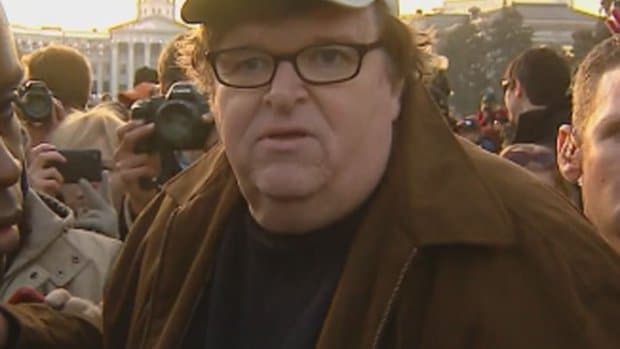 Whilst his films portend of the struggle of society and the challenges of capitalism, the recent personal fissures in Michael Moore‘s personal life reveal that he is indeed a capitalist, never mind what his films attempt to convey.

After calling it quits after 22 years, Michael Moore, 60 and his former wife, Kathy Glynn would come to reveal in Michael Moore’s divorce settlements that the outspoken critic of capitalism and the super wealthy set is in fact as equally wealthy if not more wealthy than those he likes to take umbrage with.

According to Celebritynetworth, Moore and Glynn are worth $50 million, much of his success coming from documentaries protesting capitalism.

The pair own nine properties, with Moore splitting his time between Detroit and New York.

News of the couple’s split would come via The Detroit News which would report that Moore blamed Glynn in legal proceedings for an expensive extension on their 10,000-square-foot mansion on Torch Lake in Michigan, which is valued at $2 million.

The pair who have taken to carefully articulating a hokey dokey down to earth with the common person and their struggle also come to own a Manhattan condo that once was three apartments. Indeed.

Michael Moore would come into prominence with the success of his documentaries ‘Bowling for Columbine,’ ‘Roger & Me,’ ‘Fahrenheit 9/11,’ and ‘Capitalism: A Love Story.’ All of which extolled the ills of capitalism and the perverse effects on society whilst disparate members of  society continued to aspire to the American dream. Which is to say whilst the film maker bemoans the American dream he in fact has come to attain it in larger than life status. A stasis the film maker has been loathe to publicly reveal.

Told Gary Tracy, owner of Bellaire Bait and Tackle via The Detroit News: ‘He criticizes capitalism, but capitalism made him rich. Why he decided to live in this conservative area, I have no idea.’

Another neighbor said: ‘He is not a common man. No way.’

And he seems to be aware of how he’s perceived.

In legal proceedings, the UK’s dailymail would tell that the outspoken critic of capitalism had listed six media reports from 2011, which poked fun at the defender-of-the-poor’s lavish life with headlines like ‘Mansion Begs The Question: Is Michael Moore A Hypocrite?’ and ‘Michael Moore’s $2M Hypocrite House: Film Director Lives Like The 1% He Condemns.’

In legal documents regarding Michael Moore divorce proceedings, Moore took issue with how the couple’s cash was being spent, stating that he took over the management of their funds after Glynn’s spending led to ‘serious financial losses.’

Nevertheless after a settlement had been reached, Michael Moore would go on facebook to tell fans: ‘Kathleen and Michael have mutually and amicably reached a divorce settlement,’ linking to a YouTube clip of Bruce Springsteen’s Rosalita (Come Out Tonight) from 1984.