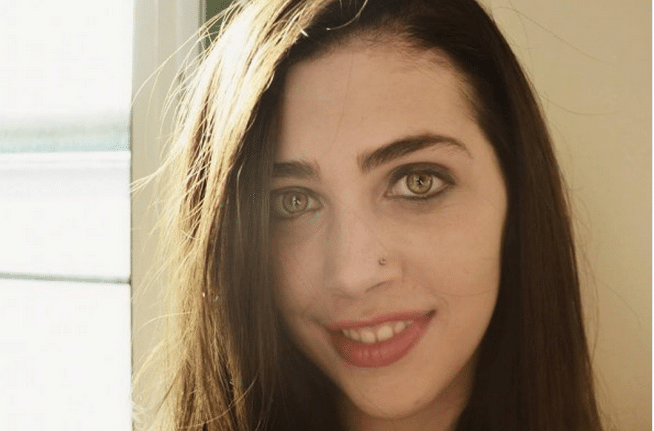 Kate Koenig a lesbian college student cut off by her parents after revelations of her sexuality has turned to a fundraising campaign to help her pay for college tuition.

The 19 year old told that her ‘homophobic’ parents refused to pay for her classes at the University of Pittsburgh after her father opened her mail last year and learned about her sexuality.

Determined not to let their decision affect her education, Koenig is now hoping to raise $15,000 to cover her tuition, living expenses and her medication for asthma and allergies on GoFundMe.

Telling how her parents also took exception with her female-to-male transgender boyfriend, Kate Koenig explained that her extended family are also homophobic, meaning she has no one she can turn to.

Writing on the fundraiser page, Koenig told:  ‘Going to Pitt is a dream of mine and I couldn’t bear the thought of not being able to stay there,’

‘I will be immensely grateful if your contributions allow me to stay at Pitt. I’m praying every day for a miracle to help make this possible.’

Offered Koenig in a video that she posted to YouTube (see below) last September: ‘They don’t agree with my sexuality and my relationship. They believe it’s immoral and it’s just wrong.’

Koenig, who wants to be a writer, said she is a good student who has repeatedly made the Dean’s List for academic excellence and that she does not want to give up her students in English, History and German.

She explained that her parents found out she was gay just before she started her first year at Pittsburgh in September last year and that, by that point, they had already paid for her first semester.

They later agreed to co-sign a loan with her for the second term but have refused to do the same for the upcoming academic year.

She explained on her fundraising page that she has money saved from a summer job and $6,500 in loans but was unable to get any other financial help or scholarships to cover the costs.

Unable to afford the whole year at the university, Koenig said she will be studying classes at a community college in the fall before heading back to Pitt for the spring semester.

But on Thursday, in new revelations, the young woman told that she had also been let go from her job at Costco because they had ‘overhired’ and were firing all their newest employees.

To help her reach her goal, she set up the fundraising page and is using a hashtag ‘#KeepKateInCollege’ to spread the word.

By Saturday afternoon, the website had raised more than $6 647.

Koenig is currently staying with friends and spends a lot of time thinking where she will stay next.

Her Facebook page and social media profiles show that she has received a lot of support from her boyfriend’s parents.

On her GoFundMe page, Koenig, who identifies as gay and pansexual, explained that her parents have also taken issue with her boyfriend, Will, who is transgender.

In response to comments about this, she added: ‘So many are claiming that I am straight and this is just my attempt to make a fake gay story for money.

‘Regardless of if I am dating him or anyone else in the LGBT community I am still gay. Being in a “straight” relationship does not take away my sexuality.’

She added: ‘I did not openly come out. My father went through my mail.’

Something about this story bothers me – there are kids her age in much more dire situations other than “mommy and daddy” cutting them off. She seems a bit entitled to me. And adding the whole gay angle is a bit transparent. We’re all (liberals at least) sympathetic to the plight of young LGBT kids especially when their conservative parents aren’t. But why does that alone make her any more deserving of free money than a straight kid?

College should be something that a child works to complete on their own without their parents’help.  The parent already spent thousands of dollars putting them through K-12, so why is the parent going further with college costs.  I, and my friends, worked our way through college.  Either that or got a scholarship, grant.  These (white) parents are babying their kids.

there is something to be said for sticking by your commitments.  The parents agreed to fund her college and she planned for that assistance.  To pull the rug out from under her is very cruel.  All the more so when she has a medical condition that requires expensive medication.