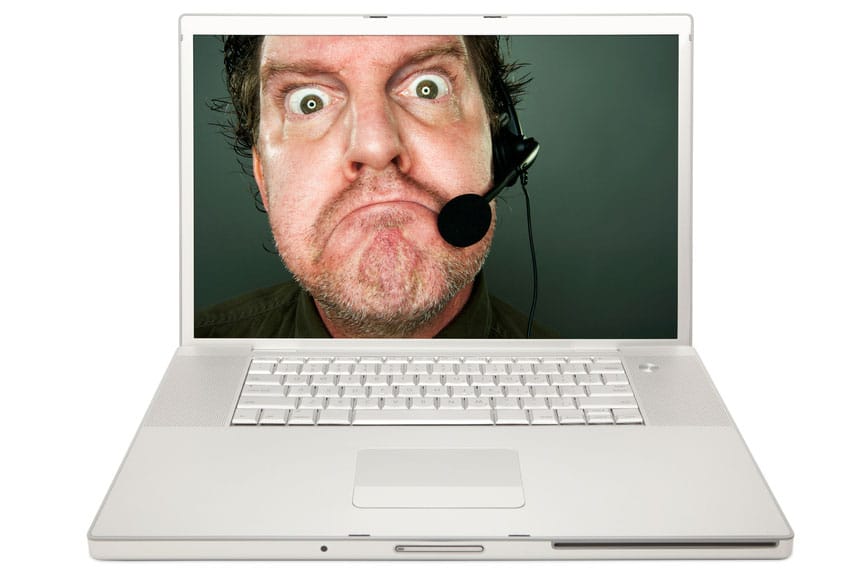 By now it’s gone viral, one tech journalist, Ryan Block‘s uber unsuccessful effort to sever ties with his cable provider Comcast, except for the fact that the attending customer service agent on the other side of the phone wants nothing to do with Block terminating his service. Which raises the awkward question, despite Comcast’s emphatic apology since the call’s revelation, is this just par for the course amongst desperate call service agents?

An example of the raucous behavior of the service agent which Block recorded and according to him had lasted for a long 18 minutes went something like this:

Rep: I’m just trying to figure out what it is about Comcast service that you don’t want to keep.

Block: This phone call is actually a really amazing representative example of why I don’t want to stay with Comcast.

Block: The way you can help me is by disconnecting my service.

In the end Block managed to succeed but certainly not before the Comcast service agent gave him his money’s run.

The recording of the call below starts about 10 minutes into the conversation. Brace yourselves…

Listening to the recording is as equally garish and one can’t help but feel sorry for the service agent who one senses is about to have his balls guillotined off should he let Ryan Block get away with terminating his service contract. Something which came to be confirmed via reddit this afternoon:

When you call in to disconnect, you get routed to the Retention department; their job is to try to keep you. The guy on the phone is a Retention Specialist (which is just a Customer Account Executive who takes primarily calls from people disconnecting their service).

If I was reviewing this guy’s calls I’d agree that this is an example of going a little too hard at it, but here’s the deal (and this is not saying they’re doing the right thing, this is just how it works). First of all these guys have a low hourly rate. In the states I’ve worked in they start at about 10.50-12$/hr. The actual money that they make comes from their metrics for the month, which depends on the department they’re in. In sales this is obvious: the more sales you make the better you do.

In retention, the more products you save per customer the better you do, and the more products you disconnect the worst you do (if a customer with a triple play disconnects, you get hit as losing every one of those lines of business, not just losing one customer). These guys fight tooth and nail to keep every customer because if they don’t meet their numbers they don’t get paid.

Comcast uses “gates” for their incentive pay, which means that if you fall below a certain threshold (which tend to be stretch goals in the first place) then instead of getting a reduced amount, you get 0$. Let’s say that if you retain 85% of your customers or more (this means 85% of the lines of businesses that customers have when they talk to you, they still have after they talk to you), you get 100% of your payout—which might be 5-10$ per line of business. At 80% you might only get 75% of your payout, and at 75% you get nothing.

The CAEs (customer service reps) watch these numbers daily, and will fight tooth and nail to stay above the “I get nothing” number. This guy went too far; you’re not supposed to flat out argue with them. But Comcast literally provides an incentive for this kind of behavior. It’s the same reason people’s bills are always fucked up: people stuffing them with things they don’t need or in some cases don’t even agree to.

This is outrageous on many levels. People are seeing things from the caller’s perspective, because we’ve all been there in some form. However, what kind of proverbial gun to the head is this tech support employee experiencing to elicit this type of reaction? It’s as if they’re told by management that if you disconnect 10 people, you’re fired, and he’s on his 9th or something. Comcast is a disgusting business, especially for hiding behind the employees at the customer level. Fish rot from the head down. The outrage should be directed towards the management level, not some tech guy working phones to pay off a student loan.

I worked as a customer service supervisor for Comcast for a little more than a month in 2011.  It’s a hell hole!  Reps are badgered constantly about up-selling customers, no matter why the customer calls.  Reps are reprimanded for losing customers and not up-selling on every call.  Supervisors are reprimanded when their reps don’t perform.  No matter what they’re VP’s say to reporters, Comcast is not concerned with customer service AT ALL.  They’re concerned with inflating your monthly bill. Period.

Comcast is supposedly embarrassed by this, but goodness knows nobody will ever buy it if they try to say this goes against company policy.

Most of these situations seem excruciating because these droids are trained to exploit the tendency of most people to be polite and non-confrontational to the point of acting against their own needs and thus doing whatever the company wants.

there is probably someone looking over the rep’s shoulder (either recording (and yes, the client doespull recordings to check them), or literally sitting side-by-side) making sure that they hit every single one of the points they’re supposed to.

I think after he realized that the rep was a nutcase he just decided to see how long it would go on while he was recording it.