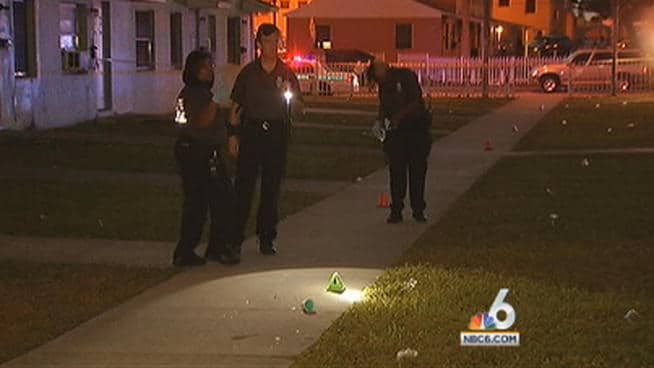 Authorities have told that 2 unknown gunmen are responsible for a Liberty City, Miami shooting this morning which claimed the lives of two men and injured 7, one critically.

According to witnesses, two gunmen armed with an AK-47 and an AR-15 assault rifle pummeled up to 50 rounds of ammunition into a Liberty City apartment complex building grounds, killing Kevin Richardson, 30 at the scene and Nakiel Jackson, 26 who would die despite being rushed to hospital.

Among the injured included a A 17-year-old girl who remains in critical condition at Jackson Memorial Hospital, whilst the names of the other victims at the same hospital remained unknown late into the morning.

Though details remained sketchy, police believe two men pulled up to an apartment complex at Northwest 12th Avenue, between 65th and 66th Streets at 2:30 a.m., got out of a dark SUV with two high-powered weapons, fired into a crowd of dozens milling about outside, then fled.

Nevertheless police have told early Tuesday afternoon that they have taken three people into custody in connection with the early morning shooting spree, WPLG reports.

Since the shooting, authorities tell more than five dozen shell casings from the gunfire littered the sidewalk, parking lot and street.

Wailed one of the fatal victim’s mother, Hermonya Richardson: ‘He said he was coming back. I want my baby. He don’t mean no harm to nobody.’

The family of 30-year old Kevin Richardson would tell that Kevin Richardson he left behind a six year old son. The other person who died was 27-year old Keiltron Jackson, according to his family, although to date another individual, Nakiel Jackson has been identified, raising the possibility 3 individuals have now been killed.

‘If it was you, why would you kill, Just stop, just stop,’ said Jackson’s aunt Cynthia Jackson Woods as she left the coroner’s office. ‘That’s all I can say. Just stop killing out people and turn yourself in, please.’

Another witness, Wonda Jackson would tell her son, 27-year old Devone McNeal, was shot twice, once in the back.

Police were having a tough time gathering information as many in the neighborhood fearing retribution refused to help. Police didn’t know why so many people were outside so late in the evening.

Offered Bennae Robinson, a family friend of Richardson’s: ‘If you know anything, come forward and say something, because it could be your child.’

The brazen shootings across the street from the old Pork ‘N Beans complex, which usually has about six police officers stationed there around the clock, attracted most of Miami’s top police brass. City Manager Daniel Alfonso spoke briefly with Richardson’s mom and other family members.

Police Chief Manuel Orosa said an officer patrolling down the street at a nearby school heard the gunfire and rushed to the scene.

Burden, the police spokeswoman, couldn’t say what the crowd was doing outside so early in the morning.

Jackson Memorial Hospital’s Ryder Trauama Center has since been flooded with family members of the shooting victims, some sitting on the ground outside chatting, others on their cellphones.

One woman, who said her 31-year-old son was shot, wouldn’t give her name in fear of retaliation. She said her family lives across the street from the crime scene.

The woman said her son was just hanging out and drinking with friends — the same thing most of the 20-somethings shot Tuesday do each night during the summer — when she heard gunshots.

‘When the smoke cleared, I just saw bodies,‘ she said.

Another woman said the side of her son’s face had been shot off. She said she’s afraid to return to her neighborhood whilst another, Greg White, whose nephew was shot told: ‘It’s not nothing new. You know, it happens all the time,’

‘But it’s sad that it has to happen.’

Authorities said they do not know the circumstances surrounding this shooting. ‘At this point, we are not going to speculate as to what happened on the scene,‘ told Miami Police PIO Frederica Burden, ‘Investigators have been here since 2, and we’re just going to give them their chance to do what they need to do to find out why this occurred.’

The last shooting of this size happened in January 2009, the miamiherald tells came when gunmen opened fire at a dice game, killing two and injuring seven others. One man was arrested for the shootings, but the state later dropped dropped the case after witnesses began contradicting each other in statements. That shooting occurred only seven blocks from Tuesday’s bloodletting.

Speculation on the web have since left many wondering if the shooting was retribution, gang related or a turf war? Whilst others have come to wonder why it came to take place at such a late hour? 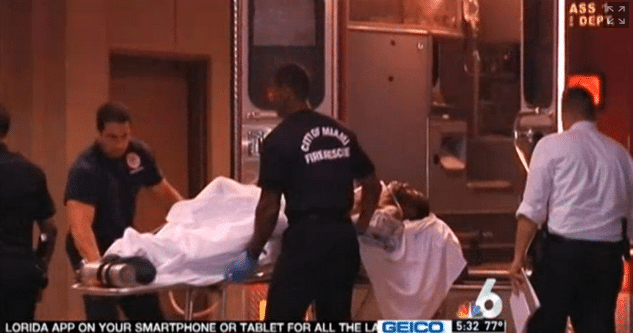 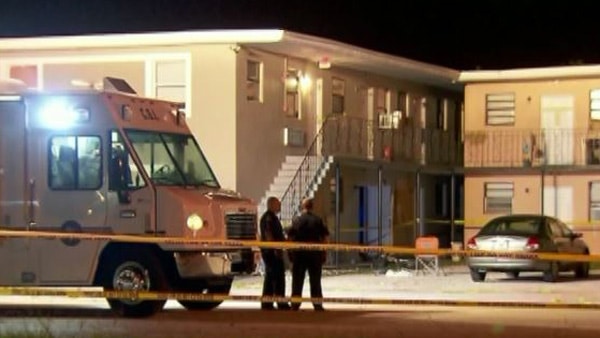