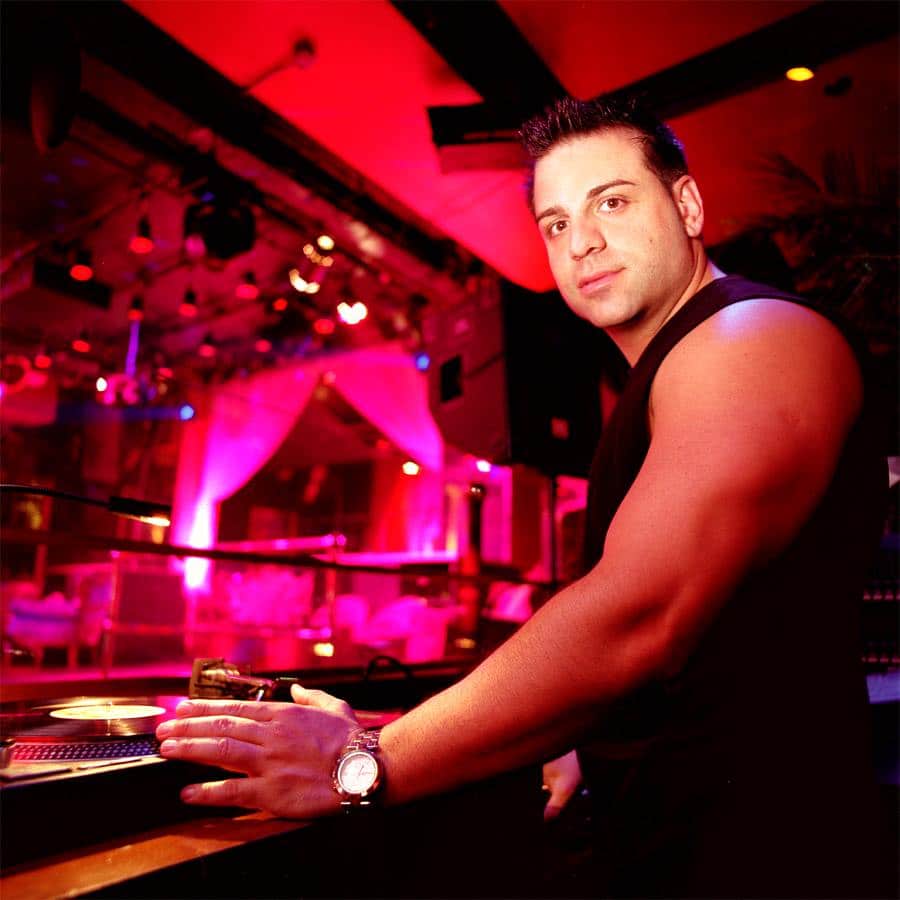 Producing and remixing chart breaking dance hits is not for the faint of heart, it takes chutzpah, a great ear, a well oiled machine (as I will soon find out) and the uncanny ability to discern what is going to grab other dj’s across the world, the labels, the Billboard Charts, social media as well as the dance attendees themselves. Enter DJ Mike Rizzo (here on facebook)who has spent the better part of the last 25 years popping them off like you break champagne bottles, ever since his groundbreaking remix of then unknown act, Tamia, ‘Stranger in my house,’ became a club smash hit and national anthem after imbuing it with disco edge.

The music producer to date has produced more than 40 number one dance tracks on the billboards (the barometer of what’s trending in the dance and pop music acts), remixed over 200 songs, many commissioned by labels for names such as Audio PlayGround, Adele, Britney Spears (‘Womanizer’), Beyonce (‘Sweet Dreams’) Whitney Houston, Akon and being nominated in 2011 for a Grammy for best remix non classical for ‘Orpheus (Quiet Carnival) by Latin Jazz artist Sergio Mendez, which at last put the face behind the music with the public.

To boot the dj who these days spends most of his time remixing and producing has also produced his own dance mix cd’s which have landed on Billboard’s top 20 charts, including Trance Nation America three and Webster Hall Dance volume 6 while his album Thrive Mix01 hit number 5 on the Billboard Electronic sales chart.

But it didn’ t just happen that way, which paradoxically explains why DJ Mike Rizzo can probably pick them a mile away and help get the marketing, promotional, and dance arms of any potential new comer (never mind the juggernauts that he already works with) to soar on the billboard charts where the dance music maestro, producer these days reins with a volley of ground breaking hits that he has recently done on  behalf of artists including, Jewel, Adele, Lindsay Lohan (yes even Lindsay), Miley Cyrus, Gia, Britney Spears and soon to be his newest act, Carmen Electra, to name a few.

According to DJ Mike Rizzo it all began over 20 years ago where he would spend months perfecting his art with vinyl and then volunteering to dj his wares evenings at venues which back then were becoming known for their music dance acts.

Sending off dj samples, cassette tapes to anyone who would listen, hoping to get his break, learning, mixing it with other dj’s fine tuning his ears and getting to first hand understand the decks, His fusion of beats is what drove people insane and how to carry a club into the early hours, a matter of fact world renowned DJ Erick Morillo used to sub for Mike at a club called Shooters in Hoboken, NJ.

It’s there where he learned to imbue the catchy hooks that in later years would soar up dance charts, infusing a semblance of disco, funk, electro, Euro house, progressive house and melting that with the soaring choruses and beats that have these days become battle like cries on the dance floor.

These days the music producer operates under the guise of two labels, Funk Generation Music and Global Groove Entertainment with cohort Steve “Mr Mig” Migliore as well as hosting a national remix dance show in the US (he used to be energy behind NYC’s infamous KTU dance plays in the evenings, which back in the late 90’s and early 2000’s which sent me delirious). His labels are according to DJ Mike Rizzo set to catapult as he increasingly finds himself fielding calls from artists, labels and European dj’s who are keen to get the dance music producer his spin and take on an act.

It is here on a sweltering NYC Thursday spring afternoon where we meet at Union Square’s Coffee shop to discuss shop, how one breaks in the industry, the direction of the industry, why certain acts, dj’s make it and others don’t and his personal philosophy to music, clubs and what makes a particular song spiral on the dance charts, along with the US dance industry’s ambiguous attitude towards dance music until now.

SCV: What makes your songs so successful?

MR: I give ‘ear candy.’ I make listeners happy, I remove them from the day to day struggles and transfer them to an arena where they just be happy and stirred by catchy beats, hooks.

SCV: But it’s more than that isn’t it?

MR: Of course it is. It’s relationships, it’s the artist themselves, who’s hot right now, who am I willing to take a risk on, who have other dj’s taken a risk on, what’s trending in Europe, and what people are paying attention to in the clubs and what are the labels willing to commit to.

MR: Because it is perceived to be the trend setter, the taste makers. Europe has traditionally been more receptive to dance and you have an inordinate amount of Dj’s who are perceived to be gurus overseas.

SCV: What do the labels look for?

MR: They generally stick with the big names. They’ll call me and say Adele has got this amazing hit and we want you to do the dance remix. They’re paying attention to what’s trending on billboard and what bigger name dj’s are playing, and you can say the dj’s do the same too, as it feeds into each other.

SCV: But what about the indie, how does the indie get their big break?

MR: It’s a package. It’s the look of the artist, are they marketable, is their brand of music marketable, the artist’s singing range, do they actually have legitimate talent, is their brand of music what’s trending and popular in the clubs,can it make people feel good, are people going to be willing to, do I believe I can add something extra to it, do I believe in the artist and the song. Can it be translated across different genres, age groups (and that is key cause a lot of the real dance music afficiandos have an ear for what works, the history of dance music).

But then it also comes down to hype, the packaging, the promotion. Being a producer is more than just being able to find a good song, writing a good song,  get a great remix going, it’s also about can you get other players in the pipeline to believe in what you envision, go out and play that song too, to get it pushed up billboard where other promoters, radio stations, clubs, venues and dj’s start noticing.

In fact I have a whole team set up just for that very thing. I have been fortunate where I came from the ground up, where I got to know the club owners, the radio station heads (particularly FM radio and dance FM radio stations), the music engineers, the promoters, other dj’s whose brand of music I can reach out to get them to add their flavor, the labels.

It’s really what it takes these days to make a song, an act go national, global. It’s hardly just the song itself, so much is about alignment with other dj’s, vendors, promoters, social media strategy, getting on the phone to see if you can get certain songs heard, played by other dj’s, and eventually making the labels aware of that too. but by then they’re already looking for you and asking you to give them your slant. That’s when you know you’re doing something right.

SCV: So you just won’t work with anyone who flashes a bunch of money at you?

MR: I can’t. It’s got my name behind it and I have to keep the integrity and reputation unshakeable. I have to believe in the artist, their talent, my capacity to bring the best out of them, to see how far I can push them, their look, their marketability, that they legitimately have an amazing voice, capacity, that others are also going to believe in them and be moved by what we put out there.

If I am going to go by the adage that I am a taste maker and that in essence is when the labels start calling you, you’re obliged to give a product that is cutting edge, in the popular lexicon, and readily consumed because you took the time to figure it out and polish it.

SCV: You mention image, package. What do you think of artists such as Miley Cyrus, Lady Gaga where it becomes more about the controversy, the antics, the image, more than the music itself?

MR: I have always preferred straight up talent and classy acts, like Beyonce, who always keeps it professional, I think an artist like her will always stand the test of time.

But then again who am I to judge what or how a performer chooses to market themselves, behave in public? I understand that there is a place for it, that it will catch attention but that can only go so far in a legitimate career in the entertainment industry where ultimately you have to come up with the goods, and love her or hate her, Miley Cyrus has got the chops (article continues next page)

How to Make Your Workdays More Fun

Famous Stars Who Have Been Spotted Gambling In Casinos