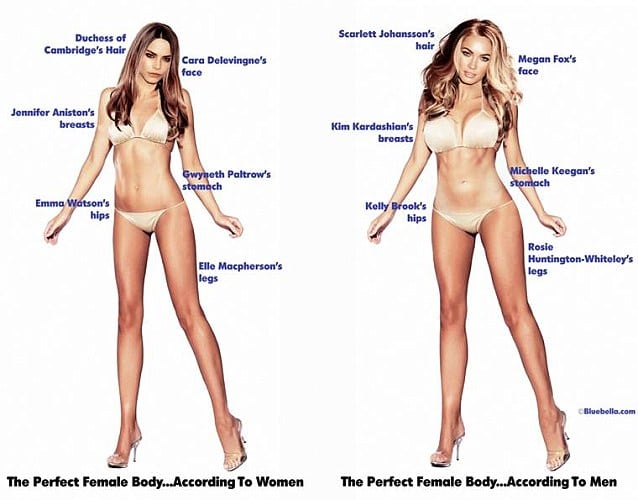 The above comes courtesy of a new study via lingerie apparel maker, Bluebella which gathered the preferences of both genders, creating ‘body beautiful’ composites using the physical attributes of what many perceive to be the world’s most beautiful people.

Perhaps unsurprisingly, women covet a ultra-slim boyish figure, while men lust after curvaceous full hips and an ample bust – whilst both sexes prefer a broad and chiseled male body. Which of course soundly counts this male author out. Then again, I am probably one of the few men who don’t particularly care for overtly curvaceous women and tend towards the lanky, lean athletic female body type. Which ought to make my present girlfriend feel good, but of course she’s too busy arguing that she’s anything but that, as most women are wanton to.

The study which the UK’s dailymail reprinted tells women opt for the boyish hips of youthful actress Emma Watson, 23, whilst a majority of men plumped for the fuller curves of 34-year-old model Kelly Brook.

The biggest difference being when it came to gender’s choice of favorite face.

Women aspire to the supermodel features of model Cara Delevingne, 21, with men were more attracted to the softer features of actress Megan Fox, 27.

If I may digress, and I wonder if I am in the minority, I have always aspired to the physical features of women with high cheek boned women with pouty features but then again I am sure there are many men who go for the baby round face, blonde bombshell next-door girl look too. I just never did.

As for breasts, I am going to have to veer off and tell I have no desire what so ever for full breasts, especially not the ones championed by Kim Kardashian. Yet that too are just the personal preference I hold, which assuming there are many other men like me, posits that the study is fantasy at best. Then again the sponsors are makers of slinky lingerie apparel.

When it comes to hair, the study tells long luscious locks are a winner for everyone – but while women are enthralled by the Duchess of Cambridge, 32, their halves would love to run their fingers through 29-year-old Scarlett Johnsson‘s mane.

I will side with the give me lots of hair bit, but as I am getting older, I am happy just to have what I get to keep. As for what type of hair women sport, I have always felt that too is a function of a woman’s face and of course her mood.

The study also tells women are less concerned than men about age when picking celebrities with admirable bodies.

Gwyneth Paltrow, a 41-year-old mother of two, is thought to have the best toned tummy, according to other women. Then again, Gwyneth Paltrow has many idle days to dedicate to making sure she has the supine tummy proportions of an idle 19 year old girl on spring break.

And 50-year-old Elle Macpherson – still known as The Body – came top of the female poll for perfect legs.

Men and women are equally conflicted with the masculine ideal. Ladies are charmed by the open face of actor Jamie Dornan, 31, while men want the flawed but chiseled bone structure of Bradley Cooper, 39.

Once again let me reiterate I could lose a few pounds but then again I don’t have time or the inclination to be waking up at 4 am in the morning and doing 400 press chests and 600 jump rope jacks. The occasional alternative jog to the park and back will see me fine. Again let me stress, most of us are not celebrities or relying on our looks for our financial or spiritual acumen, even if some of us are spending inordinate amount of hours writing about those whom do.

Reflected Emily Bendell, founder of Bluebella who conducted the survey: ‘Interestingly, the sum of all these parts does not match perceived physical perfection – neither men nor women opted for six-foot, stick-thin teenage models or perfectly chiselled, super-groomed guys.

‘It’s great to see such a range of ages and shapes.

‘Who would have thought a mother of two in her 40s in Gwyneth Paltrow would come top of the female poll for the best toned tummy?

‘And it is great that in her sixth decade Elle Macpherson is still seen as a style icon by so many women.

‘What the survey shows is that beauty really is in the eye of the beholder – it should give us all more body confidence!’

To which this male author retorts: ‘Who would have thought that some of us males can sometimes take confidence in our fantastic flawed bodies and not wish to be anyone other than whom they are….I wonder if women would agree to the same. Obviously not….’