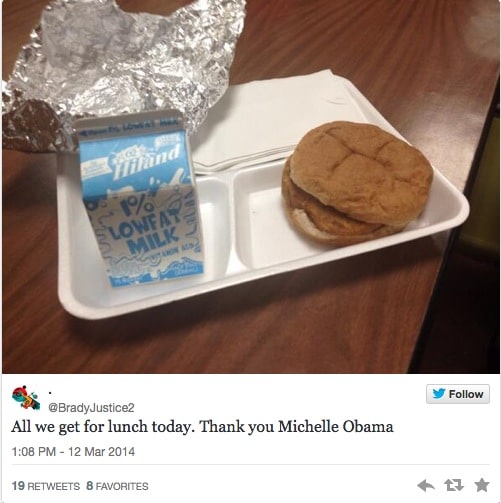 It seems not everyone is a fan of Michelle Obama‘s healthier school lunches after all as increasingly more school children are voicing their discontent with the first lady’s anti obesity initiative drive.

Since the initiative was tweaked by the first lady, the final installment put in place in January 2012, school children are now finding themselves being doled out healthier and smaller portions as part of the Healthy, Hungry Free Kids act.

Yet perhaps not surprisingly many students have simply decided to bypass the free and ‘healthier’ meals as student participation is said to have recorded the steeps drop on record.

Tweeted one student, one of many, taking to social media to express their discontent with the smaller and what many decry unappetizing lunches:

Increasingly many of the tweets come with photos of sparse lunches, which some have come to question if all they are all that healthy to begin with.

Ironically the drive meant to stave off heath concerns and hunger may have served to achieve the opposite.

At present it remains to be seen whether there will be a reconsideration of the initiative or whether school children will be forced to stomach the changes, not that there is necessarily that much to stomach in the first place.

The twitter posts come as news surfaced last week that more than a million school children around the nation have opted out of the public school lunch program, calling it subpar, non-filling and unsatisfactory. 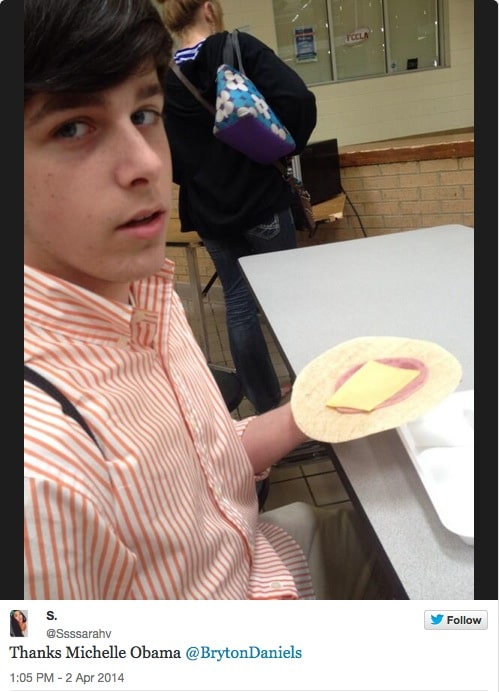 Why do the Obamas care?? This is what is on the menu for their daughters today.

Here’s the website of the company that caters for the school where the Obama girls attend:
http://merig.com The food looks a little different that the pics posted by public school kids…