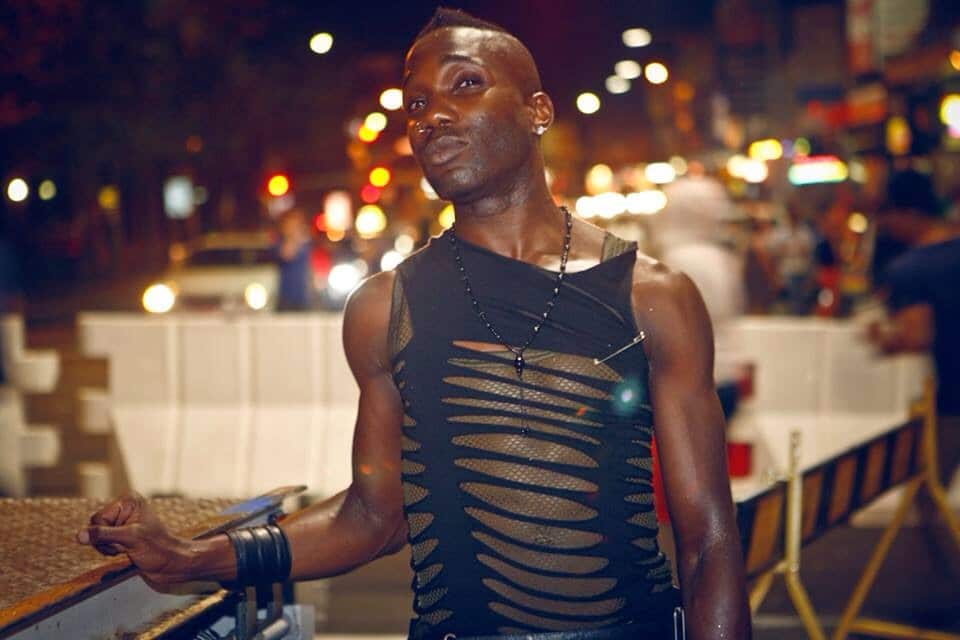 According to aesthete and  bisexual African American writer and musician Triston Negreaux, he just got served up the raw end of a rough deal courtesy of Sydney, Aussie cops who are notorious for their racist treatment of perceived interlopers.

The visiting Triston Negreaux (www.verbalslap.com, www.celebrityviplounge.com) told it all came to be whilst attending Sydney’s recent gay and lesbian Mardi Gras when cops back tracked to give him their version of justice when they saw the musician standing on the crowded street with an unlit joint (Triston’s words). Triston adds at the time the whole air was putrid with the smell of cannabis as revelers took to celebrating.

What follows next, I’ll let Triston respond, followed by a q and a I have posted at the bottom. Although nothing of grave consequence happened to the African American entertainer (this time), his rough sled treatment, name calling, verbal abuse and circumspect (illegal) handling at the hands of local cops do pose awkward questions as to how police go about enforcing rules and to what degree racism, profiling and discrimination takes place in the ‘lucky country.’ You be the judge….

It all started with a private party…

I am an American performance artist and journalist from New York, here specifically to cover Mardi Gras and Fashion Week. On the way through the Mardi Gras festivities to a private party to meet my friend, Luke (fellow NYC artist Cazwell), I was stopped and detained by two Australian police because I had a joint in my hand. I had not smoked any, but it was in my hand. They had already passed my entourage, then back-pedaled once they saw me with the joint in my hand. They took it from my hand, and that’s when things escalated.

I was told by both arresting officers that smoking cannabis on the streets, even at Mardi Gras, was against the law and that I could be charged. As I adamantly explained that everyone they’d passed had been smoking grass because it was all in the air, they asked for my passport. Once they had it, the white Australian cop (the other was Asian-Australian) asked me why I was here and who was I.

I told him I was an artist and journalist visiting and that I would be reporting on everything that happened during my stay. Including this, if necessary. The white Australian officer, despite my passport being in his hand, repeatedly asked me where I was from.

I told him to Google me if he wanted to know. Once he found out who I was, he went back and forth between niceties and racial profiling in the most barbaric of ways. He repeatedly called me ‘bro’ and ‘brother’ despite me explaining to him that calling a black man ‘bro’ or ‘brother’ was demeaning and racist in tone. To which he replied that he was Australian.

“Surely you don’t have police man that know how to properly handle an international event?”

The Asian cop was completely helpful, even telling me that I would be released with no fine once his white partner returned from his command post.

When the white officer returned, he told me that he had to take me down to the station. I agreed, even though he has promised to release me immediately to rejoin my friends, who were all to the side of the whole scene, taking photos and video. When one of my friends asked if she could leave her phone number for me to call from the station, the white cop agreed, but once we began walking towards the precinct, he confiscated my phone and turned it off. I was attempting to make notes and video of the event myself, but then I could not.

As we walked, I told everyone we passed on the streets what had happened and to take photos and video as proof for protection.

Before we got to the command post/precinct, the white policeman made the Asian officer frisk me, finding nothing. I then explained that I had to pee and we could go to the office NOW for an immediate sample to check my vitals for any drug use. The white officer blatantly and repeatedly told me that I had been doing drugs and that it was a violation.

They kept the joint, which was almost completely intact since only two puffs had been taken, and told me I would have to wait to use their bathrooms in the precinct. That’s when I asked for a full body search on the streets because I had already waited an hour with them to use a bathroom. I pulled down my kilt and showed them I had nothing on me, had never smoked grass in my country, and that this entire incident was racially motivated by the white police officer.

The Asian police officer asked me to keep my opinions to myself to further the process along to release me, but their stories kept changing as we walked. It went from a warning to a fine, to a holding cell in an Australian jail until Monday morning.

When we reached the station, I was held outside a long van, where all the other cops greeted me warmly, while the cop that arrested me repeated his berating.

I signed a piece of paper of his revision of the events, but I did not sign my real name because he would not let me tell my side of the event and the Asian cop was pressing me not to refute any claims. It was obviously clear to me that the Australian cop was also high, because I offered to get tested immediately if he would too. He refused my testing, his testing, and then told me I could be on my way.

I reminded him that they promised to take me back to my party since they were told I would be escorted back to my group. He begrudgingly took me, and again ranted slurs at me that are considered racist in my country (and worldwide).

As we walked back, there were more photographers and witnesses waiting for me. Once we returned to Oxford Street, my photographer had arrived and we began a photoshoot as soon as the cops released me back to my party. We are incorporating the shots for magazines overseas and possibly to the Australian market. My third book, Heaux Confessionals, will cover my experiences as a black American living and traveling abroad.

I’d always heard Australian police were racist, but this just confirmed it. It is my job as an activist to report on scenes around the world, from fashion to Fascism. This will not stand and I am hoping that the media in the entire country of Australia and the world get the word out on the injustices that happen here.

One of the reasons why I rarely perform in Australia is simple: the market is too small and the racist slant is not towards people that look like me. I have worked with many Australian artist that live overseas and do so for a reason. The scene here is rich but cheap. The fashion is weak and I have been brought here to change it, one day at a time. I have covered the Australian market in previous visits, featuring designer Dion Lee and prominent African-Australian models, to name a few. My work has been featured in Vogue and The Huffington Post and I would like the local media to report on this incident and others like it affecting people of color here.

To prove myself, I was almost forced by the police to sing to prove my identity. I seriously thought they were kidding, but I quickly decided to do my performance on the streets, since it was already getting close to past my actual showtime and I wanted to hurry the situation along. My band $kandal Du$t will be performing in Australia in a few months and I am seriously asking my management to cancel it, unless I receive a formal apology. Not the apology from the Asian policeman, because he did and I appreciate that. What I would like be done is that the entire police station or the other policeman (ID is pending) write me a formal letter of apology. That is all I ask. 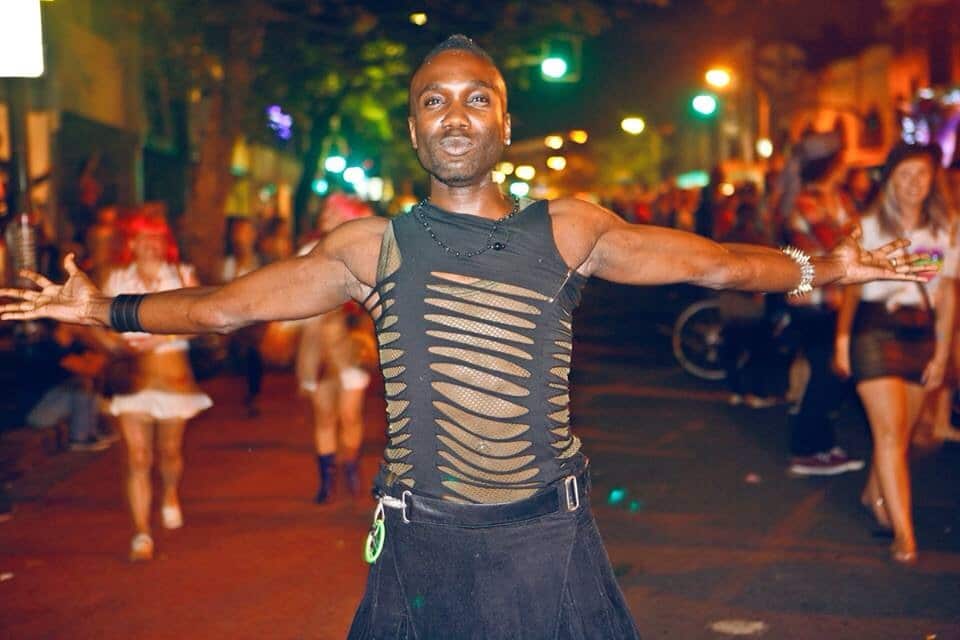 Interview between myself and Triston Negreaux pursuant to the incident:

SCV: Were you physically harassed or abused by the police officers?

TN:I narrowly avoided outright abuse by standing up for my rights. The white Australian cop was extremely hostile with me vocally, calling me ‘bro’ several times, even though I tried to educate him that these words were considered slurs in my country and as a cop at an international event, he should be addressing me by my name or ‘Sir’.

The Chinese cop whispered o me he’s let me go. His partner held me.

SCV: Were you held longer than what was legally sanctioned?

TN: Yes. They initially told me they would let me go with a verbal warning. Then the white Aussie cop said he would charge me and keep me in jail until Monday morning. Then he said he would have to take me down to the precinct. It went from fifteen minutes to three hours.

When they googled me, things changed.

I volunteered for a drug test to speed the process along but he declined since I accused him of being high as his eyes never blinked. This is fresh in the heels of cops beating a teen last year. Confiscated my phone when we left my party and lied o my entourage and said they could call me. They passed by us backtracked and arrested me- they announced it. They told me it was illegal to smoke on the streets even though everyone around them were

SCV: Were you discriminated against because of your status as an African American male?

TN: I was discriminated against because I was black. Period. Even when they had my passport in their hand, my nationality was questioned. So was my reason for being there, the duration of my stay, and what was my intent with the grass and if I had anymore I was selling?

In less than two weeks, I have been mistreated by Australian white police, and I have had witnesses each time. They are in no way civil towards people that are not white from what I have seen. I am alerting everyone I know about these incidents, as well as publishing it in my next book, which covers African-Americans living abroad and what they have to encounter.

SCV:In your words what is the injustice here?

These two cops, one of which was obviously high himself, could not agree on proper procedure for my case, and put me in the middle of it. Furthermore, they told my entourage that a number could be left to call me from, once they took me the precinct.

On the way to the precinct, the white cop made me stop in a dark alley, and there the Chinese cop frisked me, made me remove my kilt, and found nothing. During the entire incident, I was in a good mood and totally cooperative, because I could have gotten irate and the situation would have escalated more since the white cop was screaming and threatening me, plus hurling racial slurs at me no matter how often I tried to correct him. 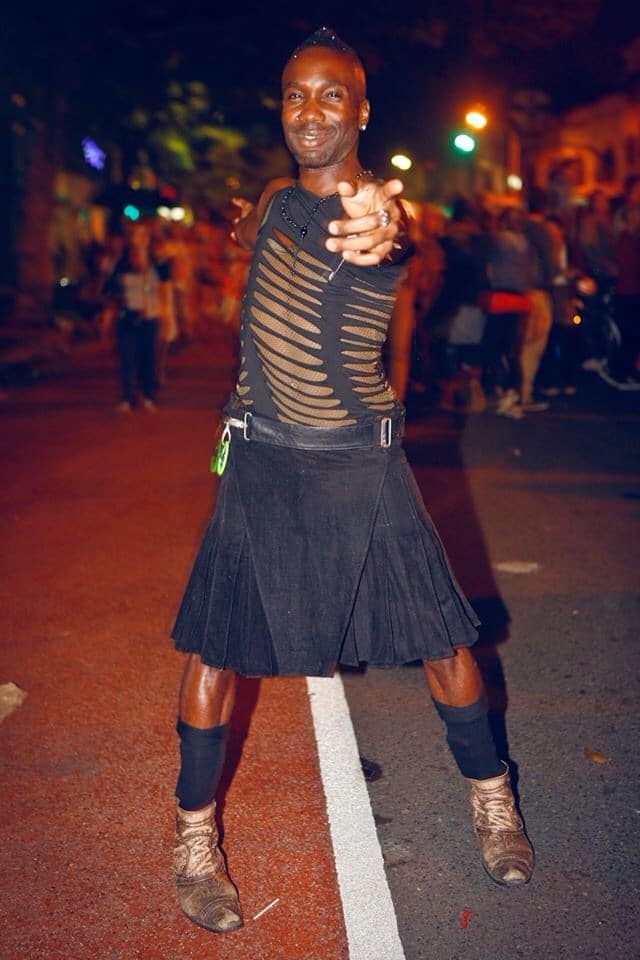