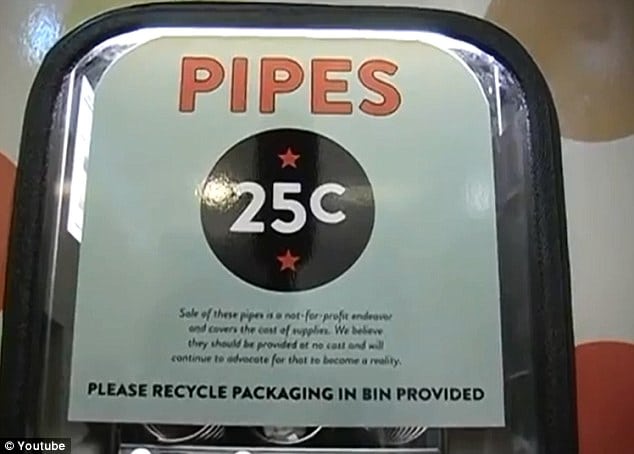 A local Vancouver, Canadian program has put into place crack vending machines in the hope that it will stem crack addiction as well as negate the dangers of HIV infection and other diseases.

Installed at the city’s downtown Eastside, the machines offer Pyrex crack pipes for only 25 cents.

Told Kailin See, the director of the DURC: ‘For us this was about increasing access to safer inhalation supplies in Downtown Eastside,’

In explaining why the program elected to serve the crack pipes, Kailin See told that the pipes are durable and less likely to cut a user’s bout, which means communicable diseases like HIV and hepatatis C will have a harder time spreading.

Perhaps not by coincidence the machines are located in one of the poorest down trodden areas within Canada which is rife with drug abuse at North America’s only medically supervised safe injection site otherwise known as InSite.

Yet the installation of the crack vending machines has once again reignited debate as to InsSite‘s policies and programs. It is said up to 800 individuals use the facility on a daily basis. At present up to 600 crack pipes a day are sold.

One of the advantages of the program tells See is the fact that drug users will now no longer feel compelled to use re used crack pipes which over time break and chip, which leaves users open to the passing of diseases as well as the prohibitive costs they can command amongst users.

In a testament as to the unease with InSite’s policies, in 2008, federal officials attempted to close down the association but the Supreme Court of Canada found the facility was exempt under the Controlled Drugs and Substances Act.

Minister of Public Safety Steven Blaney went on the record to say he disagrees with InSite’s mission, telling that he ultimately only supports treatments that end drug use entirely and ‘limiting access to drug paraphernalia.’

‘Drug use damages the health of individuals and the safety of our communities,’ he said. ‘We believe law enforcement should enforce the law.’

InSite argues that studies have shown harm reduction strategies lead to overall decreases in the infectious disease rates and make addicts more likely to get treatment by introducing them to health professionals.

See argued that as every new HIV or hepatitis case could cost taxpayers up to $250,000 in medical treatment a mere 25 cents for a new pipe was a bargain.

Confessions of a crack dealer. Part 1.

While some have argued that the existence of crack vending machines in only enabling users, some have come to believe that over time users will feel safe to seek treatment and detox as the vending machines are within the facilities proximity where counseling and other programs are available to users.

Which is to say admitting crack cocaine use is very real and widespread might be the first step in combatting the consistent use of the drug and help users eventually seek other alternatives when they are ready to do so.

Others nevertheless are concerned that the existence of the crack vending machines implies that society as a whole condones the use of drugs, then again one is wanton to suggest that just because vending machines exist (crack pipes have been sold at non descript bodegas for years) that ordinary citizens will now be emboldened to use the drug.