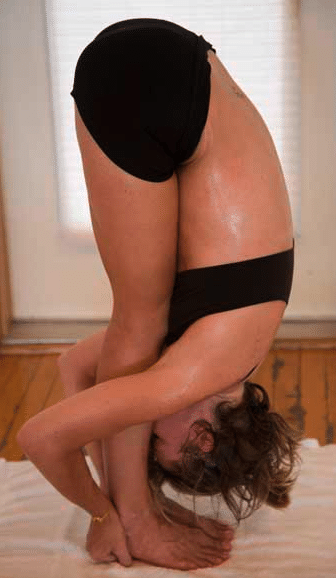 XO Jane author Jen Caron a self described ‘skinny white girl‘ likes to take yoga to self redeem. But one recent class had her self imploding after a heavy set black woman chose to take yoga with other skinny white woman.

In an empathetic essay of having to come to terms with her sudden moral torpor of being a privileged white woman in a world full of different colored people with different body frames and weights, Jen Caron was suddenly forced to wonder why there were few other black women in her yoga class and if yoga was the privileged domain of skinny white women.

A few weeks ago, as I settled into an exceptionally crowded midday class, a young, fairly heavy black woman put her mat down directly behind mine. It appeared she had never set foot in a yoga studio—she was glancing around anxiously, adjusting her clothes, looking wide-eyed and nervous. Within the first few minutes of gentle warm-up stretches, I saw the fear in her eyes snowball, turning into panic and then despair. Before we made it into our first downward dog, she had crouched down on her elbows and knees, head lowered close to the ground, trapped and vulnerable. She stayed there, staring, for the rest of the class.

Was the woman glancing around anxiously because she felt out of place amongst a bevy of skinny white women. Glancing around because she had suddenly become self conscious of her otherness, her different color skin or could we dare wonder Jen Caron was suddenly feeling angst that she somehow part of a culture that enabled white skinny women at the expense of black women, especially heavy set ones?

Because I was directly in front of her, I had no choice but to look straight at her every time my head was upside down (roughly once a minute). I’ve seen people freeze or give up in yoga classes many times, and it’s a sad thing, but as a student there’s nothing you can do about it. At that moment, though, I found it impossible to stop thinking about this woman. Even when I wasn’t positioned to stare directly at her, I knew she was still staring directly at me. Over the course of the next hour, I watched as her despair turned into resentment and then contempt. I felt it all directed toward me and my body.

Contempt and despair? But isn’t yoga all about letting go of one’s inhibitions and seeking a peaceful zen? What was it about the presence of a woman who happened not to fit the common vernacular that so vividly unsettled Jen Caron and perhaps others like her?

I realized with horror that despite the all-inclusivity preached by the studio, despite the purported blindness to socioeconomic status, despite the sizeable population of regular Asian students, black students were few and far between. And in the large and constantly rotating roster of instructors, I could only ever remember two being black.

I thought about how that must feel: to be a heavyset black woman entering for the first time a system that by all accounts seems unable to accommodate her body. What could I do to help her? If I were her, I thought, I would want as little attention to be drawn to my despair as possible—I would not want anyone to look at me or notice me. And so I tried to very deliberately avoid looking in her direction each time I was in downward dog, but I could feel her hostility just the same.

It’s true Jen, I’ve always wondered why it’s usually if not always just skinny white women at yoga? Is it a cultural thing, the way many black women choose to dance hell to the weather on the street, doll up their hair in wild ensembles and munch on their fried chicken wings? Did I just say that? Do you think I’m being politically incorrect Jen? Do you think I ought to go in a bout of deep self contemplation? Should I be bothered by the fact that there is some truth to some stereotypes and that by now the culture at large has taught me to look away and ignore what sometimes is too obvious?

I got home from that class and promptly broke down crying. Yoga, a beloved safe space that has helped me through many dark moments in over six years of practice, suddenly felt deeply suspect. Knowing fully well that one hour of perhaps self-importantly believing myself to be the deserving target of a racially charged anger is nothing, is largely my own psychological projection, is a drop in the bucket, is the tip of the iceberg in American race relations, I was shaken by it all the same.

Asks the author finally: And while I recognize that there is an element of spectatorship to my experience in this instance, it is precisely this feeling of not being able to engage, not knowing how to engage, that mitigates the hope for change.

But what are we to engage? The woman, Jen, whom you speak of chose to do exactly just that. To engage. To take it upon herself to take a yoga class in a field where largely skinny white women flock. Should we feel disempowered to acknowledge that skinny white women have certain accolades bestowed upon them? Should we ignore such things, or should we just admit it?The way this heavyset black woman admitted to herself that she may or may not be perturbed by the abundant presence of skinny white women so she too may realize herself. Perhaps that’s the right start Jen. To be willing to accept our differences and those of others and to welcome them when they choose to embrace ours. Hopefully you will embrace the heavy set black women next time she dares comes to your skinny white bitch skinny studio. You and others might be better off for it…