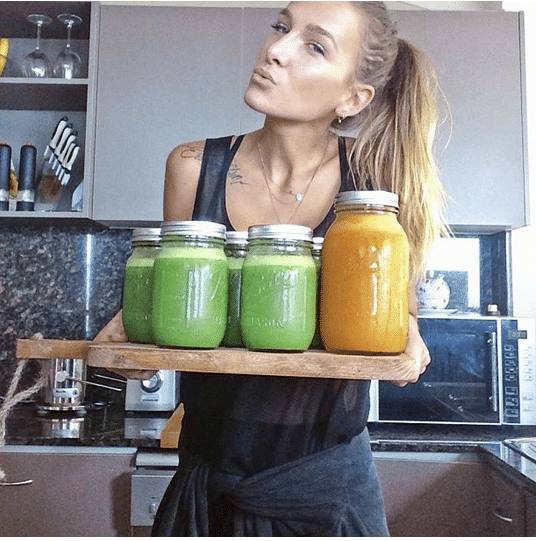 An Australian woman, 25 year old Loni Jane Anthony has gone on to cause furore after her highly followed instragram posts have gone on to promote a diet high in nothing but fruits and vegetables.

At present pregnant and with 102 000 instagram followers (the pictures will no doubt will help explain why) the svelte vixen tells how she strictly adheres to a diet plan with consists of 80% fruit and veggies, 10% protein and 10% fat.

The diet plan, the brainchild of Dr Douglas Graham‘s promotes a 80/10/10 diet which is a low-fat diet and lifestyle program based exclusively around whole, fresh, uncooked fruits and vegetables.

Told Loni Anthony who took up what some view to be her contentious dieting plan when her health first hit rock bottom 3 years ago:

“It all started about three years ago. I started getting skin infections, acne and putting on weight which was weird because I’d always been so slim. I wanted to sleep all the time and ended up with a whole range of health problems including candida overgrowth, hormone imbalance, irregular periods and hair loss,”

“I also got really sick on a trip (read: fully-blown bender) to Thailand and picked up parasites and dengue fever.

“If you scroll back to when I first started on Instagram you’ll see I was never as healthy as I am now, that’s for sure. It’s pretty crazy, the difference between then and now, but I like to keep it up there so people can be inspired that they can easily change their lifestyles as well and to also see what excessive partying, drinking alcohol and junk food can do to your body.”

After being prescribed endless antibiotics, which she says only made her scary health situation worse, Loni turned to self-healing.

“It wasn’t for weight loss or for a quick fix. I was internally really sick; I was killing myself slowly. If I’d kept living that lifestyle I would’ve ended up with a disease like cancer or early ageing. So giving up that food was really quite simple for me,”

“I’m a crazy researcher and I did a lot of research on the internet and read a lot of books. I looked at a lot of other health advocates and what they’ve done.

“I came across the The 80:10:10 Diet from an extreme fruitarian. She really taught me that you can live and thrive on this lifestyle by just eating higher carbohydrate vegetables, fruits and juices, and keeping your diet low fat. You even keep good fats low to keep your blood sugar stable. It’s been amazing.” 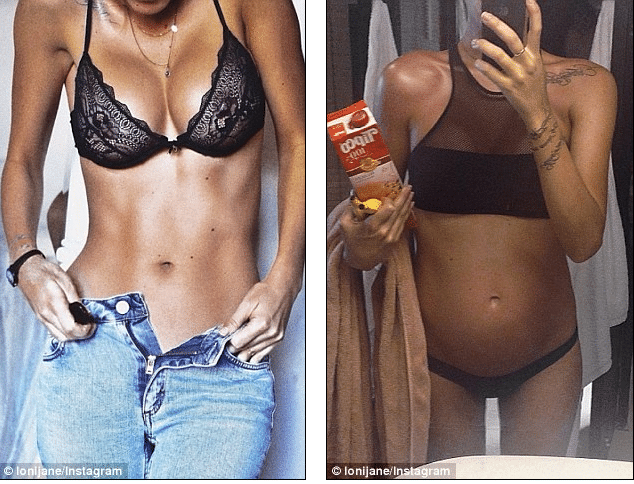 Before converting to low-fat, plant-based diet – which is 80% carbs, 10% fat and 10% protein – Loni tried the Paleo diet and did The Gerson Therapy.

“I still had problems with parasites and I wanted to a really good internal cleanse … I cleansed my body and then went straight into eating fruit and the rest is history,”

“I usually wake up about 4.30am-5am and have up to two litres of warm water with lemon. I let that go down for two or three hours. In summer I like to eat half a watermelon to get hydrated,”

“If I don’t have watermelon I’ll have a big smoothie with at least five bananas, but usually more than five because organic bananas are smaller, and about a litre of filtered water. I also always have oranges in the morning being pregnant. I’m obsessed with eating oranges.

“At lunch I usually like to have a mono meal, meaning one type of fruit, which is really good for digestion and goes straight through you. At the moment it’s mangoes I’m hooked on so my meal for lunch will be at least five or six mangoes. I might then have a salad later depending on how active I am that day.

“Dinner is always a huge salad with a tahini dressing. If I decide to have something cooked I’ll have it on the side like at the moment my crispy no-fat potatoes are divine.” 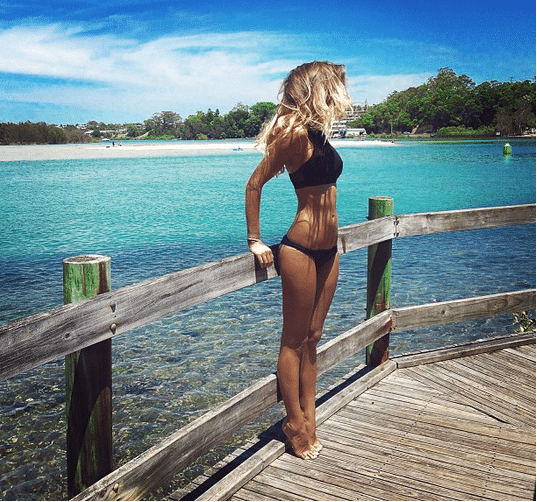 The former “heavy drinker”, whose life used to be “one big party”, goes on to tell how she now sticks to water and juice.

“I feel like a completely different person. I used to be quite closed off, a little bit angry and was a very ‘I don’t give a f***’ kind of person,”

“I’ve become so much more grounded and connected with myself and all of my surroundings. I see things more clearly. I’m more accepting. I feel so different and like I have so much more to give to the world and people around me.

“I feel like now I can share who I really am and I’m not trying to hide behind alcohol and partying. I don’t need to alter my state and get drunk to feel like myself or to have fun. I didn’t quit alcohol altogether but it’s no longer five days a week, it’s more like once every five months.”

Since significantly changing her life Loni says she’s made new friends, grown closer to her family and has met the love of her life.

“It also changes your social life because you’re not out partying every weekend and you tend to float away from groups,” she said.

“You kind of realise who your friends are. I’ve had a lot of judgment from people and people thinking I’m nuts and saying ‘why is Loni eating 10 bananas for breakfast? Is she crazy?’

“People tend to shut you out because you’re not in the social circle of alcohol or drinking coffee.” 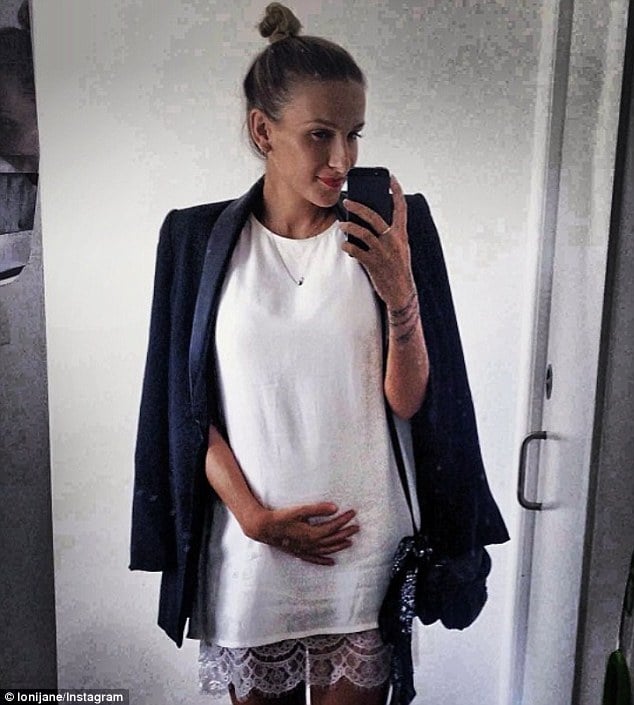 Loni says some seem “scared off” by her lifestyle.

“I’m pretty good at picking up vibes and if I feel like someone’s interested and that they’d love to be in a position of good health then I’ll put the feelers out and perhaps mention it but I usually wait for them to bring it up and then I’ll happily talk about it because I love talking about it.”

That said Loni Jane Anthony went on to receive backlash from commentators who deemed the pretty blonde ‘irresponsible’ and ‘narcissistic’ – especially as her Instagram account, which boasts north of 100,000 followers, features dozens of ‘selfies’ showcasing her svelte figure.

Told one commentator: ‘The human body cannot survive on fruit alone, it is incredibly dangerous for your health not to have variety in your diet.

‘I applaud anyone who makes a positive change in their lifestyle but fad diets like this one will only work for so long.’

Another focused on the fact she is pregnant: ‘I have to say I’m more concerned that she isn’t eating anywhere near enough of the right foods, proteins etc that her baby requires for healthy growth.

‘It’s all very well for you to want to go on this weird diet, but nutritionally I can’t see much there to help your baby grow. As someone else commented, she’s awfully small for six months along.’ 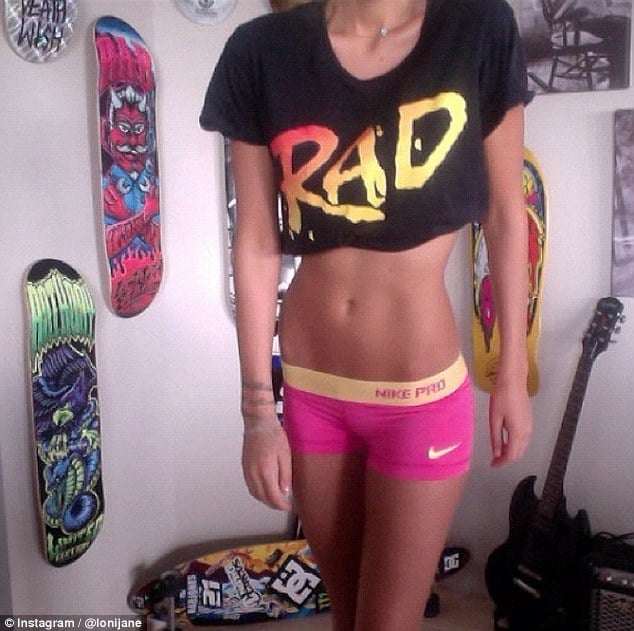 Despite receiving criticism, the soon-to-be new mum has amassed an impressive fan base since starting her personal Instagram account at the end of 2011.

“It’s still random to me. I still don’t get it. Some days, even on my Tumblr, the amount of questions I get asked is just insane. I’m like ‘why are people so interested in me? I’m just sitting here eating my bananas. I’m not anyone special’. I’m just a little earthling sitting here eating my fruit and trying to spread my message in a way that’s not offensive or preaching to people,” she said.

“I think it just became interesting for people to see my transition. When I transitioned into health I think it was intriguing to them. I’m not into tagging and all of that crap so my followers are genuine and follow because of what I’ve put up, not because I’ve got my boobs out or tagged a heap of people.

“If you live your passion people will see that. I’m just living it, and living exactly what you see, and that’s what inspires people I think. Because I’m at an age where most people are out getting super-drunk and taking heaps of drugs and having no self-respect, so I like to inspire girls because I was once in that position as well.”