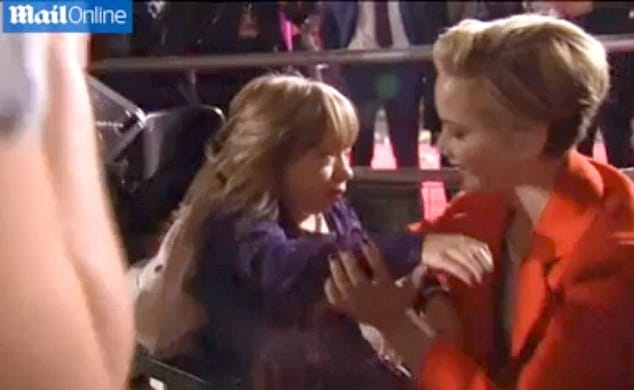 As social media has gone on to be dazzled by the apparent selfless humble actions of actress Jennifer Lawrence after she stepped off the red carpet whilst attending the Hunger Games: Catching Fire world premiere in London to attend to a young crying fan in a wheelchair some have gone on to wonder if the moment was a set up?

Contemplates the dailydot: Sure, it may have been a PR stunt, and one YouTube commenter suggested that Lawrence stopped by because the girl was in the VIP section of the red carpet set aside for photo ops.

Either way Jennifer Lawrence choosing to ingratiate herself with fans went on to strike a chord with fans who have come to sense that many celebrities these days have become too big for their breaches and taken to acting anti socially for the thrill rather than actually including their fan base which if they didn’t have wouldn’t have much to gloat about in the first place. Then again one also suspects the occasional celebrity antic is was draws the crowds closer…

Told one user on the web: It’s staged.  It’s cool that she took a moment to talk to the little girl, and she probably would have done it of her own accord anyway.  But this moment was staged.  If you don’t believe me, take your little girl to a red carpet event and see how close you can get to the celebrities.

Staged or not many went on to congratulate the actress for choosing to go out of her way to touch ordinary lives.

To everybody who is saying this is no big deal or “This is a normal thing to do”, of course it’s normal, but how often you see those famous artists doing this? That’s why she inspire us, because she is just like everyone else, with a good soul, she didn’t let the fame change that, and that’s why she is AWESOME.

Even IF the girl was given special access beforehand and Jennifer knew she’d be there, it was still an act of kindness and a nice thing to do! It don’t think it possibly being set up makes her any less genuine.

I don’t get why we can’t appreciate an act like this when it’s so rare in that industry. She’s an admirable person, I can honestly say that I don’t believe many stars with accomplishments like hers would do something like this. I’m more than happy to say that at 20 years old she’s my role model.

You mean to tell me that you don’t have to be vulgar, twerking or smoking pot on stage to be a popular young lady???