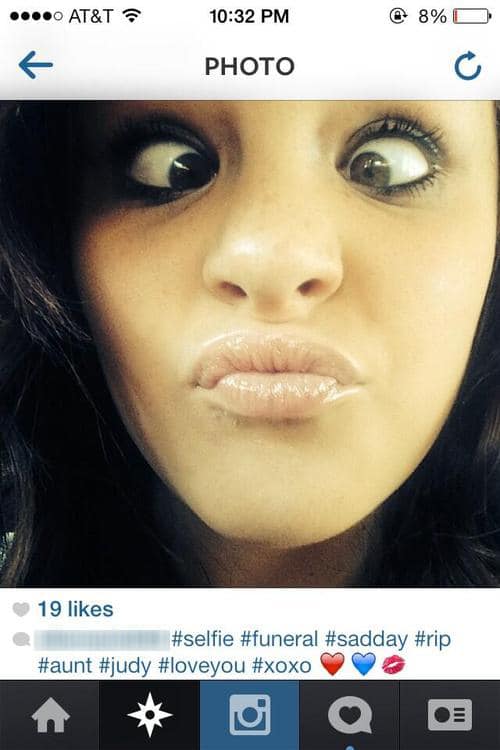 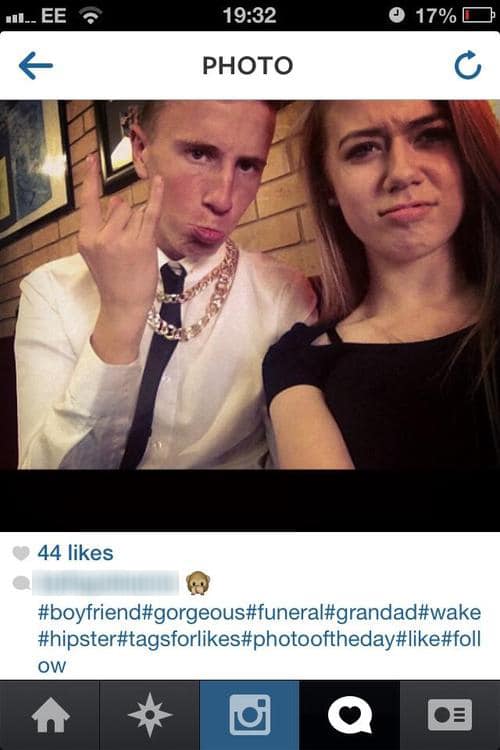 As the trend to document one’s own self accelerates, one area where it is now becoming fodder is at funerals.

Point in case being two new tumblr sites, Selfies at Serious Places and Selfies at Funerals, the latter being set up by New Yorker Jason Feifer.

Feifer’s goes on to document publicly accessible images posted on social networks, aka the selfie, which Feifer collates to render a provoking regard of the idea of the self.

It all came to be whilst Feifer was on holidays with his wife where he began to notice people using morbid environments to invoke reflections of self.

As he and his wife toured dour sites like Anne Frank‘s house in Amsterdam or the Holocaust Memorial in Berlin, Feifer kept noticing people whipping out their phones for a quick pose.

Since going on to post a variety of selfless, some people whose photos are featured on the site have written to Feifer telling they feel embarrassed for taking the selfies where they did.

Others tells Feifer went on to justify themselves, or tell the pictures have been used out of context.

Feifer for his part argues he’s not trying to judge anyone – people often just want a record of where they have been. That said, he does think it’s an interesting social phenomenon.

Goes on to reflect smh.com.au: It’s common practice now to pay condolences on a dead friend’s Facebook page or tweet out your sorrow when a famous person passes. Apps have sprung up to preserve someone’s digital presence once they’re gone. When a certain type of celebrity dies, our social media feeds explode with tributes, and we are all faced with a choice: publicly acknowledge how profoundly Lou Reed changed your life, even if he didn’t, or intentionally hold yourself back because tweeting with the masses doesn’t seem like something a real fan would do. Maybe just one RT?

Reflects Feifer: “This is a thing that people do – and when you see it in aggregate it takes on a meaning. For the first time in human history, we have the ability to share whatever we see, whenever we see it,”

Whilst some have cautioned about using the act of the selfie at venues traditionally meant to be solemn, many have gone on to appreciate that many of us do use process our inner thoughts and feelings about pretty much everything via social media. Which perhaps suggests that the outcry against the practice, perhaps aesthetically jarring and self involved might be an over reaction as human beings turn to a new vessel no matter how gratuiously to express wonder and self affirmation.

But here too is a risk. Goes on to reflect smh.com.au: And since we use Twitter and Facebook in part to create a public persona, our posts always run the risk of appearing self-promotional, inauthentic: It’s never quite clear whether someone is actually upset about the latest Hollywood overdose or just trying to seem that way.

Then that too may be part of the kick of going on Jason Feifer’s tumblr page, selfies at funerals, as one is forced to reckon with the (il)legitimacy of self, of others, of death and of course society’s very own legitimacy in an age where one’s sense of self is open and instant fodder for the world to instantly see and sham at the narcissist’s own risk.