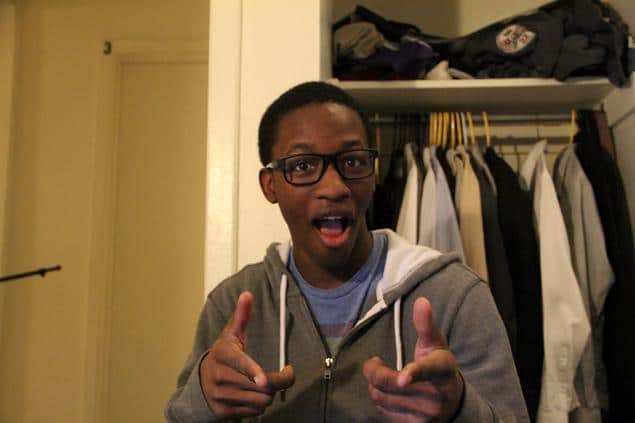 Delight and salvation must be running through the mind of missing NYU student, Asher Vongtau after his ass was found after inadvertently falling between two building structures over the weekend.

For his troubles, local media tell that the fortunate to be alive missing NYU student suffered a fractured skull, pelvis and arm, as well as contusions to his lung and spleen.

His eventual rescue tell reports came after worried pals raised the alarm and his pleas for help were eventually heard.

Told the NYU student’s mother, Habiba Vongtau: “It started out that he was missing, nobody knew where he was. And all of a sudden, they discovered he’d fallen between two buildings,’

Went on to say the disheveled mother of the aspiring political science major (kids is this a metaphor of future political faux pas to follow?): “I’m just completely stunned — he’s actually one of those responsible kids,’’

Went on to add the mother: “He was pretty weak, but he was able to say hi,”

And how exactly did Asher Vongtau manage to get himself in his yummy predicament?

Told one  fellow sophomore student Mike Yablon: “I don’t want to elaborate on what we were doing in there.”

Kids is your mind racing as to the yummy events preceding Asher’s sudden descent into hell and fury?

Went on to tell Yablon: “All of his friends went to security to tell them that he was gone and was last seen heading to the roof. They thought it was a joke,’

“They didn’t want to check the cameras until tomorrow. We finally got them to go check it out, and they found his cellphone up there [on the dorm roof].”

But kids what do you think Asher was doing on the roof in the first place? Just taking in a bird’s eye view? Absorbing the better part of the ‘school curriculum?’

Tells the nypost: New York University spokesman John Beckman said Vongtau was found by school security Sunday afternoon when one officer heard him moaning from within the tiny space.

Reports go on to tell the student lived on the fifth floor dorm room when he fell between an 18 inch gap on the 18th floor room between another adjacent building.

Nevertheless rescue workers were able to extract the ever relieved Asher Vongtau, who took up to an hour and a half to rescue as they broke through an adjacent garage wall.

Reflected Fire Chief Joseph Schiralli: “We don’t know how he got there,”

“He was moving his arms. I asked him his name and his age and he told me.”

The UK’s dailymail goes on to note that Asher Vongtau was ‘frantically running to the roof,’ perhaps as a result of purported false fire alarm. Or maybe not?

Interestingly the post goes on to note that the aspiring political analyst’s sister, Zoe Vongtau does not plan to tease her older brother about the mishap. That said she did go on to tell that ‘he’s one of the smartest people I know.’