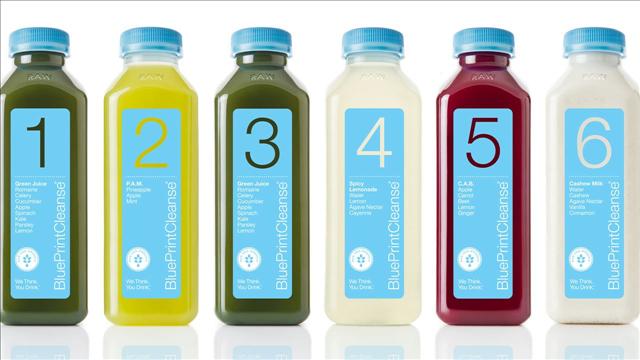 In an ever increasing need to show one’s prowess and cunning acumen (and by defacto, their desirability) consumers have taken to a new craze which shows them off without having to say too much, $12 bottle juices.

Tells the wsj: ‘Just as carrying a Starbucks coffee cup has become a celebrity fashion accessory and a slung-over-the-shoulder yoga mat can signify a certain devotion to spiritual fitness, porting a clear bottle of green vegetable juice has evolved into a status symbol.’

Goes on to reflect Sarah Andersen, 31, a health and fitness coach from Madison, New Jersey : ‘I know it’s expensive but I would rather have a juice than get my nails done.’

That said Andersen insists she’s not spending upwards of $50 on the vegetable juice for show but because it actually has her feeling more ‘healthy,’ ‘confident,’and requires less effort than making her own.

Her favorite brand? Suja, which is based out of San Diego and sold online and at Whole Foods stores. Which these days may count as its own status symbol as the store is known to stock organic food and delicate yummies which tell the outside world ‘I have got money to burn and I don’t mind paying up for the exulted experience.’

Another popular choice among the health-and-body conscious is BluePrint, a company launched seven years ago by Erica Huss and Zoe Sakoutis, both of whom had experienced the health benefits of juice cleanses.

That line saw its bounty increase after A list celebs such as Gwyneth Paltrow, Beyonce and Sarah Jessica Parker went on to endorse the line after being often associated and seen with the product close to hand.

The wsj goes on to tell initially, the juicing market was supported by people doing liquid-only cleanses, marketed as a way to cleanse the body of toxins and ‘fit into your skinny jeans.’

Yet these days more consumers aware that being perceived as being uber healthy is the new jig are drinking juice simply as a quick way to get their five-a-day, or to convey the impression of being health-conscious.

Countering claims of the high cost of their ‘organic’ products, beverage makers tell the high expense of processing, prevents them from lowering prices.

‘We wish we could bring the cost down,’ says Zoë Sakoutis, co-founder of BluePrint, which was acquired last year by Hain Celestial Group Inc and reportedly scored $20million in sales last year.

Meanwhile Suja co-founder, Annie Lawless, a 26-year-old former law student and yoga instructor, whose outlet produces an average 10,000 bottles a week at its Southern California plant and plans to open a plant in the Philadelphia area next year:

‘When you buy a bottle, you’re getting all the goodness without any of the effort.’

And of course all the cache your casual strut down the footpath can shake its skinny ass at….