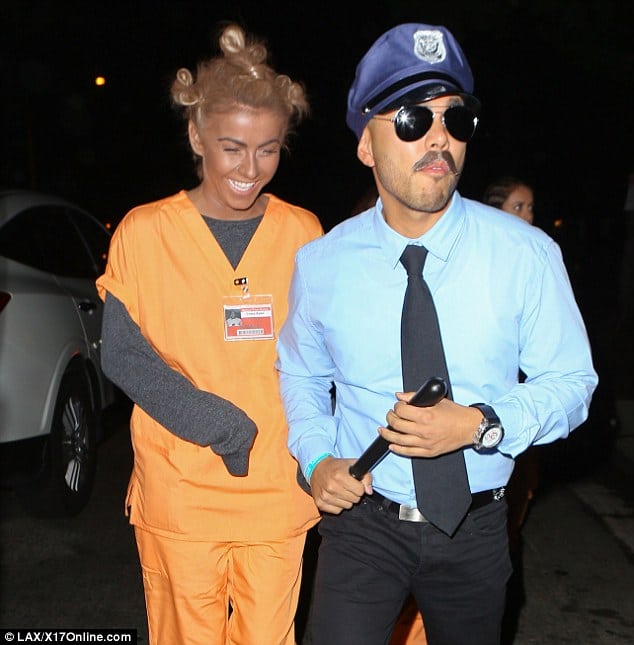 White people dressing as blackface Trayvon Martin for Halloween is not loved.

There seems to be little love lost for former ‘Dancing with the stars‘ pro Julianne Hough after she was photographed this weekend past donning a blackface and prison jumpsuit.

The actress went on to tell the outfit was simply a parody on actress Suzanne ‘Crazy Eyes’ Warren from the hit Netflix TV series, as played by African American actress, Uzo Aduba, though many nevertheless went on to argue Hough went too far by altering the color of her skin to portray the prison inmate.

Never mind the fact that Aduba to date has not been criticized for wearing a prison jumpsuit which if one wanted to be politically picky would also insinuate her own complicity in reinforcing negative stereotypes about African Americans. Then again as an African American perhaps she is tacitly given a green light to address or reference herself as such without hostility, in the same manner that African Americans often refer to each other as ‘niggers’ but frown in hostile diatribe when a white person is heard to use the same expression.

That said social media and the media in general were not impressed and went on to express outrage (are you surprised?)

Reflected Joan Duvall-Flynn, president of the Media Area Unit of NAACP of Pennsylvania:

“The current racial tensions in the United States require careful reflection as we relate to each other. If her behavior is a political statement, she should explain that,”

“If her behavior is an act of impulsive insensitivity, she needs, as a public figure, to be more responsible. And, an apology for such insensitivity is appropriate.”

Which raises some very important questions. As a public figure what are reasonable expectations the public ought to have of their cultural ambassadors (for a lack of better words)?

Is Hough obliged to follow implicit rules of conduct that the public looks up to (irrespective of whether she may necessarily believe or practice such behavior or thoughts in private) and who is to say the dancer can’t dress as she pleases, especially in light of the fact that was after all this was merely a Halloween party she attended, where one in fact does dress up in costume. Are we to now expect party revelers, stars included to follow political correctness even in the pursuit of merely having fun? Whatever fun means for some of us…

Granted one can agree the Hough’s blackface costume was hardly in good taste and the implication is morbid, yes Hough may be reflecting racial bias or at the very least reinforcing negative stereotypes. But then again why pick on a performer when the society and media as a whole is complicit in enforcing racial stalemates and the uncomfortable truth that in fact a greater proportion of African Americans are in fact incarcerated. Is there shame in pointing this out, even at a Halloween party?

Perhaps more ominously the fact that the public and media have reacted with such vitriol hints at its own complicit behavior in enforcing such negative stereotypes merely by the mere fact of being so conspicuously troubled by what an actress wears, never mind the larger social dynamics at play which so often are negated and in fact used to further deepen tensions.

Nevertheless sensing she had crossed some social line of etiquette the actress went on to gratuitously apologize on twitter, telling that she ‘never (her) intentions to be disrespectful or demeaning to anyone in any way,’ and that she realizes her costume “hurt and offended people.’

That said the rush to forgive Julianne Hough wasn’t necessarily forthcoming as actress Martha Plimpton went on to call Hough a “moron” – although she later apologized – while others went on to tweet that Hough was a “racist b*tch,” and “f*cking stupid.”

One Twitter user pointed out that Hough isn’t the first star to dress up in that way.

“And the latest white celebrity to cluelessly bust out the black face is… Julianne Hough.”

@l_choice2001 went on to write: ‘what is wrong with white people and black face?!?!?!’ while @tnwhiskeywoman opined: ‘The hair & ID BADGE should’ve been enough. @juliannehough YOU HAD AN ID BADGE TO INDICATE WHO YOU WERE. You didn’t need offensive blackface.’

Other stars who have come under fire for similar costumes over the years include Ted Danson, Billy Crystal, and Sarah Silverman.

That said there were some who went on to defend the actress.

“I’m not very offended by Julianne Hough’s get-up. Were we offended by the Wayans in insipid ‘White Chicks?’”

“People need to stop being so thin-skinned. Julianne apologized. What more do you people want? Blood? Leave her alone.”

Whilst others turned to humor to reflect on the situation. Told comedian Zach Braff referencing the actresses former boyfriend, Ryan Seacrest:

“@donald_faison you should go as Julianne Hough for Halloween. I’ll be Seacrest,”

That said, while some wonder if the actresses costume would ruin her, crisis management expert Glenn Selig went on to reflect that the incident isn’t likely to hurt her brand in the long-term.

Told Selig: “Julianne apologized for the costume and it appears as though she did not intend to offend anyone by dressing up that way. The reality is Julianne is too young to have lived through the ugly history of black face and Hollywood,”

“That doesn’t excuse it–she clearly should have known better–or someone around her should have. I don’t see this single incident as causing any irreparable long term harm to her or her career.”

But what Hough’s serious case of poor judgment may point to is a lack of historical awareness among younger generations, or specifically those in the isolated Hollywood bubble of fame and fortune.

Went on to further reflect Selig:

“Clearly there are some in Hollywood who lead very sheltered lives, have not been broadly educated and therefore lack perspective,”

“That can get them into trouble as it apparently did this time with Julianne.”

It is a great situation to learn the difference between cultural etiquette and confrontation of the lack thereof. Too many people get caught up in the messenger instead of look at the message. I have noticed that those who are insulted by such things as these are actual the one’s who continue to view life through whatever lens they are insulted by. Racism can only exist if you still view people from that viewpoint. It doesn’t matter which side of it you are on. Whether you are the one shooting or the one being shot.