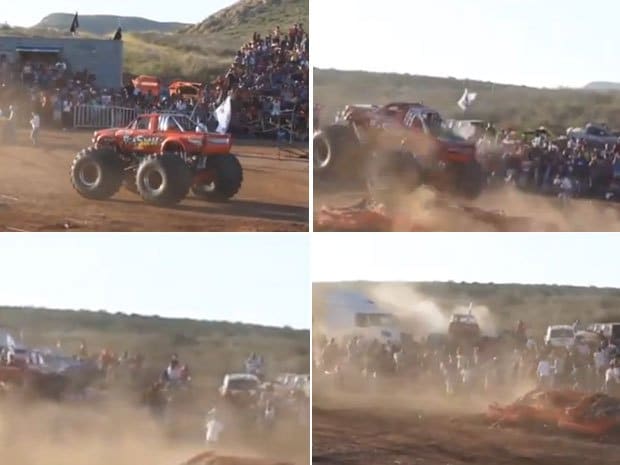 A drunk Mexican monster truck driver has gone on and killed 8 spectators and injured a further 79 during an air show.

The tragedy came to unfold when the Mexican monster truck went out of control and shoot into a helpless crowd whilst demolition stunts were being performed on the outskirts of Chihuahua.

The driver, Francico Velazquez was thought to be drunk at the time after authorities went on to detect alcohol on the man’ s breath.

The UK’s dailymail goes on to tell video taken from the stands shows the truck making an initial pass over two cars, before then making a second pass at higher speed, coming down sharply nose first and bouncing violently before piling into the crowd, which stood directly in the path of the monster truck unprotected by any wall or barrier.

Witnesses went on to tell the driver appeared to have hit his head on the interior of the truck, which is nicknamed ‘Big Show,’ as he drove over the old cars. At least two witnesses told seeing the driver’s helmet come off before the Monster truck drove into the crowd of terrified spectators, who tried to flee, sending the driver unconscious and plowing into the crowd.

Told one spectator, Jesus Manuel Ibarra to AP: “I fell over, and when I turned around I saw the tyre very close. It hit me and threw me to the other side.”

Chihuahua Mayor Marco Quezada said 8 people were killed and that 79 people had been hurt. Twelve remained in intensive care, with four in critical condition.

Carlos Gonzalez, spokesman for the Chihuahua state prosecutors’ office, said prosecutors were looking into the possibility of a mechanical failure that left the driver unable to release the gas pedal. Several witnesses said, however, that the driver appeared to have become incapacitated when he struck his head during the show.

The three day show went on to be cancelled after the accident on the second day, whilst the governor of the Mexican state declared three days of mourning to honor victims.

The driver has since been detained on suspicion of manslaughter whilst an investigation into safety measures asking how the audience could have been placed so close to the trucks performing stunts with only limited barriers in place.

There is a lot wrong with this picture, but let’s start with the premise that trucks shouldn’t be monsters, as they are trucks. Monsters are monsters. OK, trucks dont fly, they roll on the ground. While monsters may fly, they don’t roll over people…they may swoop down and eat them, or burn them with fire or whatever else monsters do, but they’re monsters, not trucks.
Building on this premise, I have to question why either one is providing the entertainment for an airshow, which is an entirely different way for someone to get killed. Can you imagine watching an airshow and a monster swoops in and it becomes an epic battle between plane and monster, and here you are underneath with no helment on. Can you imagine while you’re looking up watching that, a truck rolls over you. I can imagine a lot, but I can’t imagine what they were thinking.