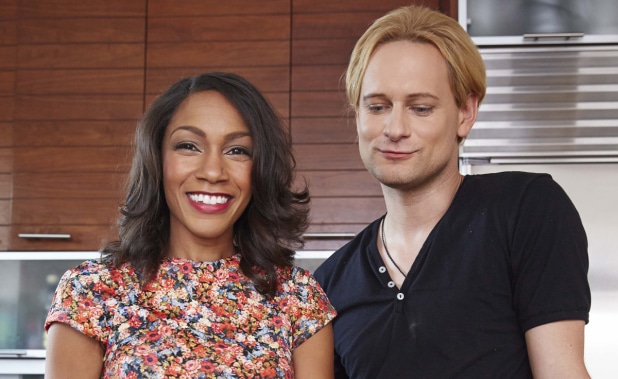 NY Post’s Stephanie Smith has not it seems done women’s cause a great favor, judging by the overwhelming responses against her to win a wedding proposal from her  hunky live in boyfriend Eric Schulte.

That of course hardly fazes the reporter as she sets about this morning laughing off the stinging backlash against her and reminding us all that love is peculiar and not necessarily within the bounds of what many would consider proprietary.

Extols the weary Stephanie Smith: On Wednesday, I wrote in The Post about how my boyfriend Eric’s joke remark after making him a snack — “Honey, you’re 300 sandwiches away from an engagement ring!” — inspired me to do just that and chronicle the project on a Web site, 300sandwiches.com.

Apparently, in some corners of the Internet, this is an outrage.

“Why would you ever do that when he is capable of doing for himself? What is this, the 1960s? So sexist,” one wrote on Twitter.

“MEN HAVE BEEN SOLVED BY ERIC THE SANDWICH WHORE,” she continued.

It seems some of Stephanie’s sandwiches may have gone the way of sour in the public’s palette. But this is Stephanie’s yummy sandwich to make and to munch on as she and Eric damn well see fit.

Continues Stephanie who knows better than you and me the best way to her man’s heart:

Some people read into the article too literally — they truly think that if I get to 299 sandwiches, there could actually be a moment there where Eric may say, “Eh, you didn’t make enough steak sandwiches. I’m not sure you deserve a ring!”

Nevertheless Stephanie goes about assuring us that she is not the detractor to women’s rights that the public have scorned her to be but simply a light hearted girl who just wanted to give herself a yummy excuse in the kitchen and one assumes one hell of an article to forever remember how lucky she is to write for the sunny tabloid paper the NY Post.

The blog started as a lighthearted joke between boyfriend and girlfriend. I presented it to the world because I thought at least one person would find the humor in the idea of sandwiches for an engagement ring.

This project is not about me promoting myself as some gourmet chef, nor a desperate plot to win Eric’s love — or a movie deal or Internet fame.

It’s an idea that made us laugh and made for a good, lighthearted blog with some drool- inducing sandwich photos.

Yes bixches, the yolk is on you. Shame on you for ever really believing that Stephanie would resort to becoming a Stepford wife resigned to scrubbing the floor in her Prada heels with a sliver of prosciutto and yesterday’s buffalo mozzarella cheese hanging by the side of her apron. Stephanie is beyond this and much more.

Since I’ve launched the blog, E and I have learned a lot about each other besides whether or not he likes tomatoes. We’ve laughed at our mistakes, become more patient with each other’s faults and I’ve learned to not be afraid of our stove.

Kids tell me you’re not gushing and silently nudging your own partner and whispering in the back of their soft pillows that you too are prepared to make not just 300 sandwiches but 3000 because love means more to you than some publicity shrill.

But nonetheless, virgin olive oil sticky fingers and pastrami nuggets that Stephanie Smith is patiently nudging in the corner of some foccacia bread as we speak, bixch really knows that at the end of the day she’s still game and more of a woman than you will ever be:

Eric is the type of guy that at least deserved one sandwich. And I’m the kind of woman that wanted to make him one.

I’m no less of a woman because I decided to make him 300 after a flip joke.