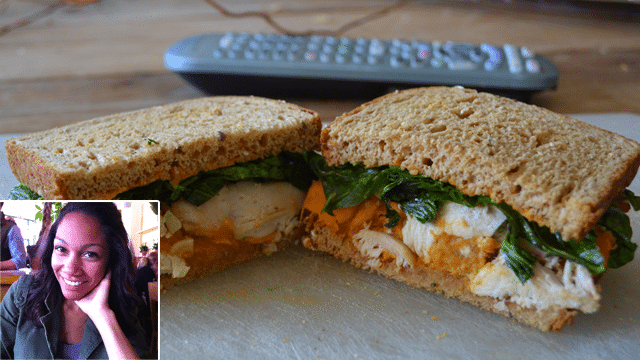 NY Post reporter, Stephanie Smith has happened upon the interesting arrangement where by if she agrees to make her gourmet chef boyfriend 300 sandwiches he will consider whether he will marry her. Hence set the reporter’s quest to seduce her boyfriend through his stomach.

Not content just to make her boyfriend sandwiches, Stephanie Smith decides to document the fawning over with a blog, 300sandwiches.com (rest assured the blog naturally becomes the darling of all gourmet chefs the world over) whereby she meticulously takes photos of the gastronomical delicacies, aka the sandwiches that she will go on for an unforeseen time to make for her darling in waiting.

To be sure, Stephanie Smith knows her cookbook and has a rabid imagination and to date has managed to come up with some delicious yummies (yes Stephanie my mouth was watering) in her pursuit of the love of her life.

Choice yummies include these delights below. Go to link to fawn and slobber if you dare:

Sandwich #171–”Fashion Critics” Fried Egg and Pancetta on a Roll

That said, Stephanie being the reporter that she is finally decides to come clean with the world and reveal that she is the mystery attendant to the zippy blog that to date the owner’s identity has remained a mystery to. Why today I can’t be sure. After all she is only 176 sandwiches in and there is still the threat that she will run out of gastronomical ideas or even the will to carry out her venture. But then again Stephanie Smith happens to write for the NY Post which could only mean there’s a brewing story in one’s capitulation of begging for a man’s hand.

Begins her coming out article in the nypost today:

My boyfriend, Eric, is the gourmet cook in our relationship, but he’d always want me to make him a sandwich.

Each morning, he would ask, “Honey, how long you have been awake?”

“You’ve been up for 15 minutes and you haven’t made me a sandwich?”

To him, sandwiches are like kisses or hugs. Or sex. “Sandwiches are love,” he says. “Especially when you make them. You can’t get a sandwich with love from the deli.”

And thus begins the resolve of this modern day woman to win the heart of her live in man (we learn the two live in a swank Brooklyn address) but all the while the reporter begins to wonder if she is selling herself short in her quest to get married as friends of hers retort she is giving in to chauvinistic tendencies and has become a quasi Stepford wife.

Maybe I needed to show him I could cook to prove that I am wife material. If he wanted 300 sandwiches, I’d give him 300 sandwiches — and I’d blog about it.

I bought the 300sandwiches.com domain name and a Nikon DSLR.

Goes on to vex our Sex and the City gourmet sandwich maker, fully aware of what is at stake and what she had signed up for:

“Three sandwiches a week, times four weeks a month, times 12 months a year, meant I wouldn’t be done until I was deep into my 30s,” she writes. “How would I finish 300 sandwiches in time for us to get engaged, married and have babies before I exited my childbearing years?”

Nevertheless doubts aside, Stephanie Smith plods ahead, 176 delicious sandwiches in and 124 more to go, resigned that this is her lot in life, to be glamorous, to report for the NY Post, to be a modern day woman who is not afraid to question and challenge things (even the way she goes about getting married) but all the while slightly annoyed that she has regressed to a traditional semblance of what the modern day woman has fought so hard to avoid becoming: her man’s lunch keeper.

Which raises the question will Eric the hot stud chef love her even more for keeping her word and making all them delicious sandwiches? Will he keep his word and propose to her once she reaches the pinnacle or will Stephanie Smith suddenly realize that she is selling herself short and refuse to make the last batch of sandwiches until Eric agrees to start doing 300 chores around the house…?