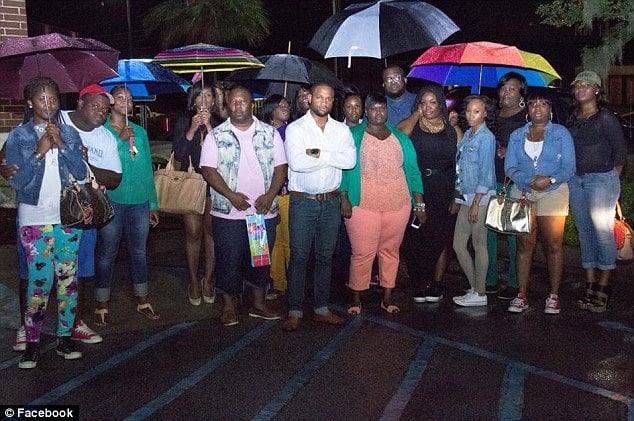 Disarray has gone on to follow after reports that a South Carolina man and several of his friends went on to say they were refused service at a Wild Wing Cafe in Charleston last month and subsequently asked to leave.

Asked toleave because according to Michael Brown, he and his group of 24 friends and family members are African-American, and another customer – a white woman – went on to complain to management that she felt threatened by the group.

The snub according to Brown came after he and his group were made to wait for two hours for a table.

Went on to tell Brown: ‘She said there’s a situation where one of our customers feels threatened by your party, so she asked us not to seat you in our section, which totally alarmed all of us because we’re sitting there peaceably for two hours,’

‘Obviously, if we were causing any conflict, we would have been ejected out of the place hours before.’

As Brown and the shift manager set about talking, a member of his party began videotaping the conversation, which is when the manager became upset and refused to seat the group.

Went on tell Brown: ‘I asked her I want to be clear with you,’

‘I said so you’re telling me I have to leave. She said I have a right to deny you service. I said so you’re asking me to leave because you’re upset because he was recording you, after we’ve waited for two hours, and after you’ve already pretty much discriminated on us, and she answered yes.’

From there Brown sought restaurant superiors but never got any response which led to him posting the above on facebook.

‘I will never go to Wild wings cafe in N. Chs again! We (Party of 25 family and friends) waited 2hrs, patiently and were refused service because another customer (White) felt threatened by us. This type of racial discrimination is unacceptable and we have to put a STOP TO IT. The manager looked me dead in the face and said she was refusing us service because she had a right to and simply she felt like it. DO NOT SUPPORT THIS ESTABLISHMENT… PLEASE SHARE THIS POST… We need your help,’

Nevertheless it wasn’t too long after Brown’s post started doing the rounds that the restaurant finally acknowledged Brown. Yes one ought to love the cynicism.

Told Debra Stokes, the chief marketing officer for Wild Wing Cafe: ‘We got alerted through social media, so we always encourage our customers to respond to us or to comment on our social media pages,’

From there representatives for Wild Wing Cafe went on to tell they went on to speak to Brown.

Told Stokes: ‘We had a conversation,’

‘It was a really good conversation. He and many of his family and friends were there about a month ago, and they are regular customers of ours. So, they were having a going away party, and they just didn’t receive the experience that they have come to know and love.’

Interestingly Debra Stokes at no point went on to deny that Brown’s story was true.

The restaurant has since gone on to offer Brown and his family a free meal for the entire group. Yet Brown isn’t necessarily smitten either:

‘We weren’t coming there for a free meal. When we came there that night, we were coming to patronize the business. This is not a situation where you can just give us a free meal and everything is ok because it’s deeper than that,’

If you act like a punk, you get kicked out. You shouldn’t get inferior treatment because of color, but neither should you be privileged. 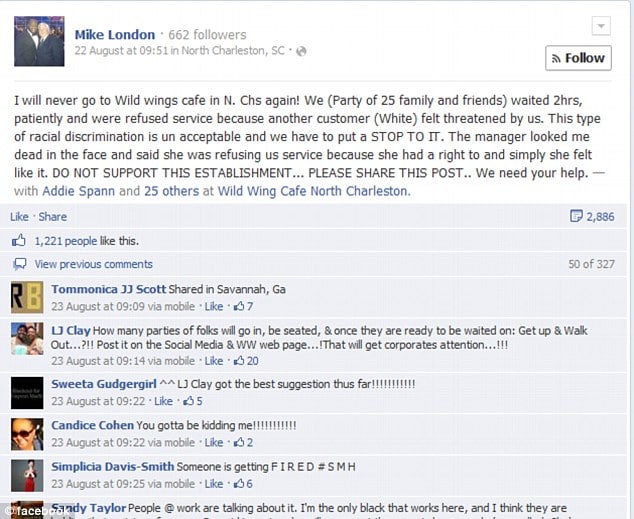