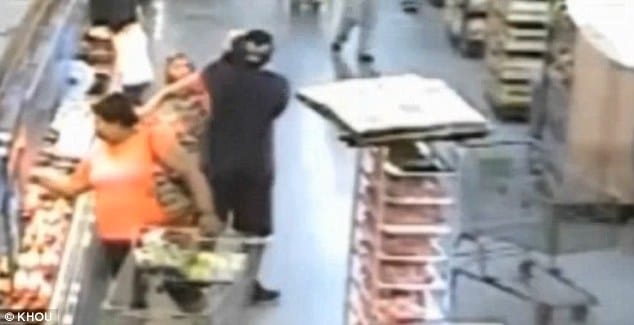 Store video at one Walmart outlet in Oklohoma City has gone on to capture disturbing footage of one individual who without warning snatched a young girl who was sitting in her mother’s cart. From there an ensuing hostage crises took place before police shot the man dead in the head.

It all happened when a mother went shopping with her two daughters and an individual later identified as Sammie Wallace reaches into the mother’s shopping cart to snatch her two year old whilst the elder 12 year old sister looks on in horror.

From there Wallace hands a cell phone to the girls mother and demands she call a police officer he knows in Dallas, TX, all while holding a knife to the 2 year old’s stomach.

Told one shopper: “He took this woman’s kid and we need a police here immediately.”

“There’s someone with a knife holding a little girl hostage,” another shopper told 911.

Terry Parker, a local pastor, watched the dramatic scene unfold and heroically blocked Wallace with his cart until the police arrived.

“If that gentleman was to come in my direction, he had to go through me or my cart if he wanted to do that,” he said.

Police said Wallace was not responding coherently, that he was acting unstable and making unreasonable demands. Afraid for the child’s safety, police moved the mother and her older daughter to the front of the store.

From there Wallace started counting down from sixty, threatening to harm the child, moving the knife towards the little girls’ neck as she starts to squirm.

Then while one negotiator distracts Wallace, another goes up and shoots him point blank.

The officer immediately grabbed the little girl, who was unharmed.

“He knew if he was going to take the shot he had only one chance. He made sure he was at point blank range so there was no ability to harm that child,” Midwest City Police Chief Brandon Clabes said.

I’m really disturbed by some of the comments in this thread. The guy was mentally ill. That doesn’t mean the police acted wrongly, they saved the kid and the only person harmed was the aggressor. I assume if there was a safe way of taking the guy down without killing him they would have taken it.

But it’s still sad. Someone died and a whole family was traumatized. Hell, probably a whole store. Yet there’s comments on here talking about how happy they are that the guy ‘got what he deserved’. There’s people who are disappointed they don’t get to see a video of a mentally ill person getting shot. Seriously. What the hell. Who wants to see that? Who the hell is happy that that happened? Someone who had an illness they likely could not control had the worst kind of breakdown, with the second worst possible consequences (worst being if he actually had hurt the kid, obviously). WTF reddit? Why so bloodthirsty?