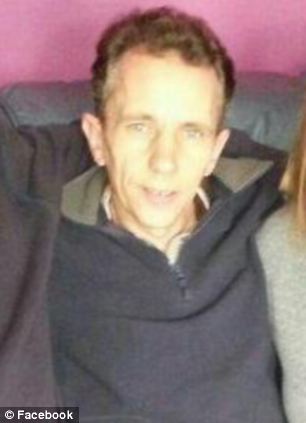 According to Simester his travails came to be when he went on a holiday in Wales in August of 2000.

At the time he claims he came across his masters who went on to lure him with a job offer. Little did he know that he’d be forced to literally work and live like a slave.

Simester’s parents,Tony, 66, and Jean, 61, contacted the police around 50 times but were never able to locate their son.

But after years of searching, they have finally tracked him down in a remote farm in south Wales following an anonymous tip-off.

They found Darrell living in a filthy caravan in a farmyard with no running water. He was starving, wearing dirty, torn clothes and had teeth missing.

Now reunited with his family in Kidderminster, Worcestershire, Darrell has a host of medical problems caused by his poor treatment over the past 13 years.

Simester has gone on according to the UK’s sun to describe how he had been forced to sleep in a rat-filled shed at the farm before being moved into the caravan two years ago, but still having to shower using water from a horse trough.

His father described his son’s treatment as ‘inhumane’ and ‘horrendous’.

He added: ‘These type of people roam the streets picking up the vulnerable and offering them a new life. Then they are treated like dogs.’

Nevertheless Simester managed to call his parents every six months for the first eight years to let them know he was alive, but was too terrified to tell them where he was. Once he implied he was in Ireland but they had no luck finding him there.

Then when the calls stopped in 2008 they feared the worst had happened.

Mrs Simester set up a Facebook group to help find her son, which had up to 9,000 members at a time helping with the search.

In February of this year, Simester parents put out an appeal in a Welsh local paper after receiving information through the group that one of the calls their son had made could have originated in Cardiff.

The next day they received a call from an anonymous person who said they were 95 per cent sure they had seen Darrell at the farm, near Cardiff. From there Simester’s parents and their youngest son Duncan traveled to the site with police where they found their son.

Speaking to the South Wales Echo, which had run their appeal, she was reunited with her son.

Told Jean Simester, Darrell Simester’s mother: ‘Not having heard from him for four years you’re thinking the worst. When the phone calls stopped… What can I say? This day has made my life.’

The family would end up later posting a statement on their Facebook group saying: ‘We will share our good news..WE HAVE OUR SON DARRELL BACK HOME..So this has been’ THE GREATEST DAY OF OUR LIVES’.

‘Please respect our privacy for the next few days we have to let him recover. Many thanks for all your good wishes over the years and not giving up ..x x x

‘You are wonderful people and I feel that I know you all. From the bottom of my Heart a VERY BIG THANKYOU..X X X.’

Since reunification, Darrell Simester has had to go to hospital several times, including undergoing an operation.

His father has gone on to say his son’s problems were ‘all down to the conditions he has been subjected to over the last 13 years’, but his mother confirmed he was ‘getting stronger and coping very well’.

In a message on Facebook, she said: ‘Darrell is settling down to a peaceful family life, something he has missed out on in the last thirteen years… his health is our priority and each ailment is being dealt with even though it seems to take ages to get anything done for him… he at last sleeps in a proper bed with bed linen and proper washing facilities, clean clothes, all of which he has not had.’

She said he was slowly being reunited with members of the extended family – including nieces and nephews he had never met – as he felt ready to.

‘I have shown him the Missing Darrell Simester page and he couldn’t believe that so many people have been involved.

‘Thank you to everyone that has supported our family in finding Darrell, without your help, the appeal in the (South Wales) Echo and the One Person who telephoned me with where Darrell was, we still would not have him home.

‘You are all forever in our hearts and thoughts God Bless you all.’

Gwent Police said investigations were ongoing into ‘the conditions in which Mr Simester was living and working during the time he was not in contact with his family to establish whether any offences were committed.’

At present it is not understood whether there have been any arrests or why for that matter the farmers went on to purportedly treat Darrell Simester the way he claims he was treated although one wonders why for that matter he chose to take on a job initially when he went on holiday and why he feared to reclaim relations with his family. One wonders if there is more than meets the eye to the story and whether Darrell Simester ever actually wished or sought to leave the situation that he had come across.