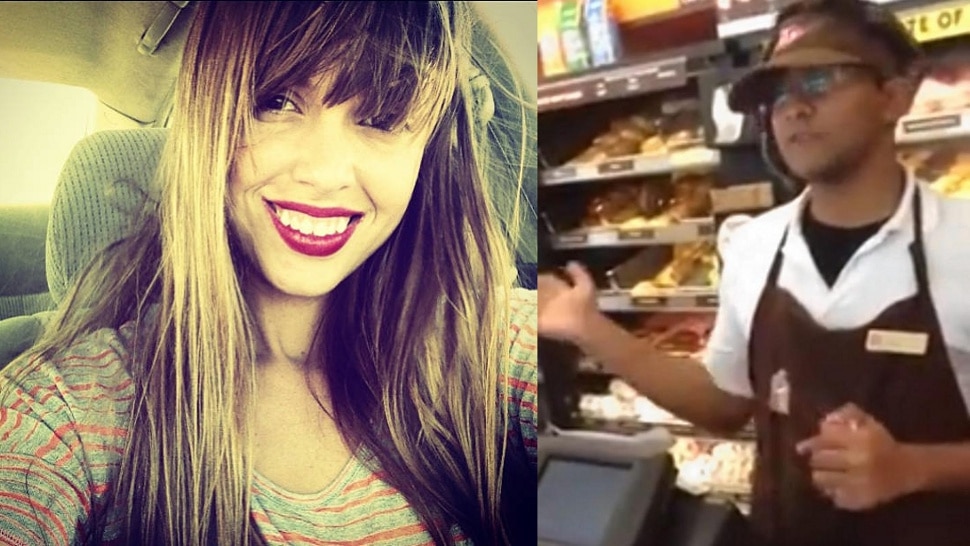 Dunkin Donuts customer insists on free food when they fail to receive receipt.

Dunkin Donuts employee, 18 year old Abid Adar who managed to calmly deal with one dishevelled customer (to put it lightly) is to recognized by his employer for the valor of his efforts in defusing a situation which could have easily gotten out of hand.

The brouhaha began when a customer returned the following morning complaining that her ass had not been offered a receipt the night before when she had dropped by and that she was now entitled to some free shit. Which par for the course would have been no problem as the outlet stands by its promise to honor such pledges save for the fact that 27 year old Taylor Chapman was hardly in the most conciliatory mood when she began her racist demeaning rant with a video camera in tow.

Yes that’s right kids, Taylor was going to show the world what a hero she was when she posted that shit to the web except not everyone saw Taylor for the fighter of home truths she rightfully believes herself to be.

In the end what started out with a belligerent demand for free food ended in a racist, Arabophobic rant that included unhinged threats to blow up the planet from Mars. I know who hasn’t the desire to blow up Arabs and Mars, right?

After being bombarded with requests to recognize Adar’s handling of the situation, Dunkin’ Donuts said on its Twitter feed that it plans to do just that.

Gawker go on to tell that an Indigogo campaign to raise money to support the “educational aspirations” of the accosted employees — Adar, who is currently earning $8 an hour, is planning on becoming a doctor —has also been launched, but is currently woefully underfunded.

“Our franchisee will b recognizing the employees 4 their efforts,” Dunkin Donuts tweeted, adding the appropriately mistyped commendation, “They handled the difficult situation w/ race (sic) and patience.”

And then there were these two updates that gawker received from headquarters too:

We commend the franchisee’s crew member for handling this difficult situation with grace and patience. We believe this is a powerful example of great customer service and the respect our crew members have for our guests. The franchise owner of the restaurant has reached out to the crew member privately to express and demonstrate his personal appreciation.

Additionally, Dunkin’ Brands’ leadership has reached out to the two crew members featured in the video. Both have been invited to an internal company event in Boca Raton later this month for further recognition.

What do you think kids? Aren’t you entitled to walk into a store and make a fool of yourself cause of your self entitled ass? Cause human beings are equal even if deep down you think they’re to serve your holy ass under some self pretense.