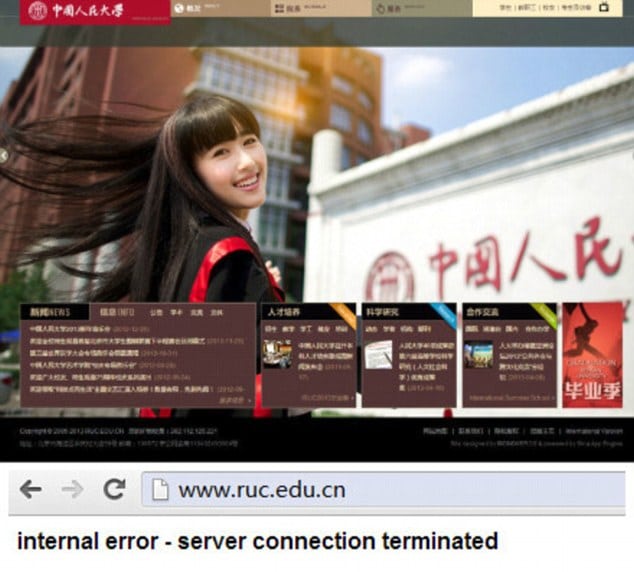 A Chinese University’s website is said to have crashed after viewers attempted to log on to the site in hopes of catching glimpses of one university student, who goes by the name of Kang Kang‘s recent graduation pictures.

Seen in a variety of poses around Renmin University School of Art, the university caused wide spread interest when it chose to swap out of its normally conservative home page for those of Kang Kang this past Sunday night.

Yet so popular were the images of Kang Kang, who has now gone to be known as the Goddess of Renmin that the university website couldn’t cope with all the sudden new incoming traffic and went on to crash the following evening.

The Beijing News goes on to tell that the girl’s photo was shot by a 2011 graduate, Mao Yanzheng, who is now a professional photographer.

Told Mao: “It’s unbelievable that it takes only one photo to make a person famous.”

The former student went on to tell how he shot over 300 photos and chose two he thought were the best for the university’s website. He went on to tell that he only shot the images as a favor.

The images would end up to ultimately spark different views online. Some netizens praised the picture for capturing the beauty of youth during graduation time. “This student embodies the elegant, fresh look of our graduates.”

Yet some were less sanguine with one commentator wondering out aloud “Is Renmin University about entertainment or academic work?. Do schools now advertise their academic work, or how beautiful their students are?”

Making matters worse is that the crash came during a time when hundreds of would be students sought to send off admission applications to the school.

At present it is not currently understood whether the school has managed to make amends for the would be students.

Interestingly Kang Kang has resisted all efforts to comment on the matter. Can anyone guess why…?