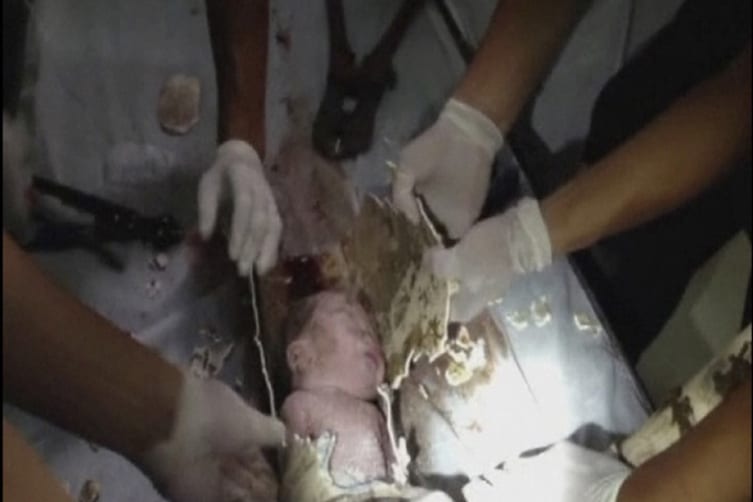 The mother of baby no 59 has stepped forward and confessed that she is responsible for her new born baby being flushed down a squat toilet. The confession only came after authorities insisted on inspecting her rented room and came across toys and blood stained toilet paper.

The 22 year old single unwed mother, whose name has not been released, had actually been present during the two-hour ordeal to rescue the baby from the four inch wide drainpipe, but had watched on in secret, refusing to step forward until the police traced the child back to her.

Yet perhaps what is most beguiling about the case is how the mother herself is the individual who first raised the alarm of hearing sounds of a child crying in the below sewer pipes which in turn led to authorities insisting on checking her rented room.

To date the child, temporarily called baby no 59 because of the sewage pipes from where he was rescued lies in an incubator with a fractured skull and severe bruising.

The incident has since led to a pouring of outrage in a nation in which brutal acts against youngsters are a common occurrence.

Authorities had initially gone on to say that they were treating the case as a possible attempted homicide, but at present it is not immediately clear whether the mother would face any criminal charges.

A police officer has gone on to say that the 22 year old mother reiterated that she had hidden her pregnancy and claimed the baby fell into the lavatory after she unexpectedly gave birth. ‘

The woman was on the scene during the entire rescue process … and admitted she was the mother when we asked her.’

He said police were still investigating whether she had any ‘malicious intentions’ before deciding on charges.

The UK’s dailymail goes on to tell that the single woman, a tenant in the building, told police she could not afford an abortion and secretly delivered the child Saturday afternoon in the toilet.

According to authorities she has gone on to tell that the newborn slipped into the sewer line and that she alerted her landlord of the trapped baby after she could not pull the child out, Zhejiang News said.

That said confounding matters is the landlord of the building has gone on to insist that there were no signs that a birth took place in the restroom and she had not been aware of any recent pregnancies among her tenants.

Nevertheless the mother has now gone on to tell police she cleaned up the toilet after the delivery and that she had managed to hide her pregnancy by wearing loose clothes and tightly wrapping her abdomen.

The incident has since gone on to be widely discussed on China’s Twitter-like service Sina Weibo with calls for the parents to be severely punished.

The rescue prompted an outpouring from strangers who came to the hospital with nappies, clothing, powdered milk and offers to adopt him.