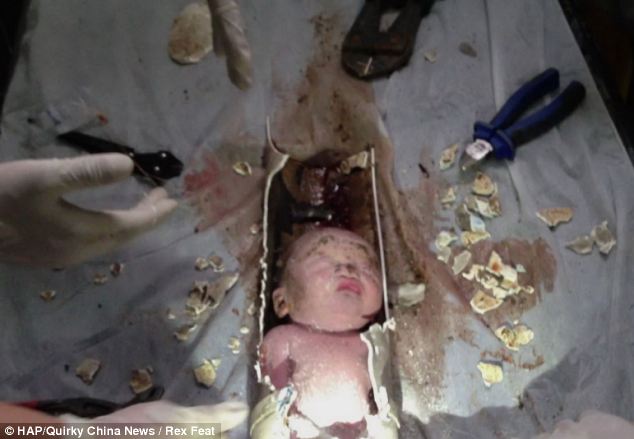 Mother of Chinese baby no 59 watched in secret as baby was saved.

A newborn Chinese baby flushed down a squat toilet after its mother gave birth has miraculously been saved after a neighbor heard the child’s cries and notified authorities.

The baby which would end up being called Baby No 59 from the number of its incubator was eventually dislodged from a sewage pipe in a residential building in the district of Jinhua, a wealthy coastal province of Zhejiang, China this past Saturday.

The pipe from which the baby was removed from was just four inches wide after firefighters managed to remove the pipe whereupon doctors then carefully cut around it in order to safely remove the child.

Local media sources went on to report that the child’s arms were pinned to his side,with his eyes, face and body covered in the filth of the pipe.

The landlord of the building in Pujiang county told that it was unlikely the birth took place in the toilet room because there was no evidence of blood and she was not aware of any recent pregnancies among her tenants.

The baby was stuck in the L-joint of pipe with a diameter of about 10 centimeters (3 inches).

Since the child’s rescue he has remained in stable condition and police are now attempting to locate the child’s parents.

Local media outlets go on to tell that a number of visitors have donated nappies, baby clothes and powdered milk to the hospital to help the little boy.

The case has been widely discussed on China’s Twitter-like service Sina Weibo due to the graphic nature of the footage, with calls for the parents to be severely punished.

Wrote one user: ‘The parents who did this have hearts even filthier than that sewage pipe,’

The incident once again reflects the disturbing indifference that many in China have towards life and the plausible explanation that the child’s mother had simply been unaware that she had been pregnant or simply shamed or perhaps not in the economic position to do so or. The abandonment of the child is understood to be one of many that is a daily and ongoing occurrence in China, particularly in light of China’s one child policy.

Authorities are treating the incident as an attempted homicide.