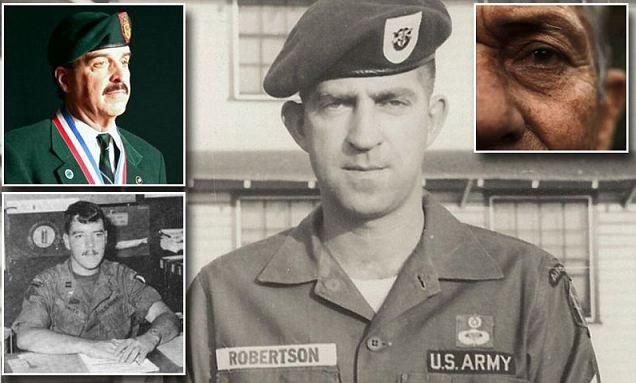 Documentary claims to have discovered American soldier 44 years after he went missing in Vietnam war.

A 76 year old man purporting to be missing Vietnam vet Sgt. John Hartley Robertson has been exposed as a fraud. The revelation comes after sleuths uncovered the real identity of the individual who many thought might just be the missing Vietnam vet as a practicing professional con man.

In fact the con man is said to have been known to the CIA as far back as 20 years ago who went on to test his DNA only to confirm at the time that he was not missing Vietnam vet, Sgt. John Hartley Robertson.

The case came to light after Emmy award documentary film maker Michael Jorgensen took to making a film, Unclaimed after Vietnam vet Tom Faunce approached him on the subject matter last year. Although the film posits the idea that the individual discovered might be the missing vet, many questions were left unanswered and in fact only served to lead to more questions and doubts as to the film’s claim that its subject was indeed missing Vietnam vet Sgt. John Hartley Robertson.

Chief concerns included the man purporting to be Sgt. John Hartley Robertson unable to speak English and his and that of his purported immediate American families reluctance to have DNA testing.

Tells the UK’s dailymail who is breaking this story:

A 2009 Defense Prisoner of War Missing Personnel Office (DPMO) memo sent to the MailOnline on Tuesday acknowledges that the man, known as Dang Tan Ngoc, came to the attention of U.S. personnel in Vietnam in 2006.

He was claiming to be Sgt. John Hartley Robertson, who is thought to have died in a special forces op mission over Laos in 1968.

He was interviewed and under questioning admitted that he was not Sgt. Robertson but a Vietnamese citizen.

However, in 2008 he again tried to pose as the MIA veteran and was taken to the U.S. Embassy in Phnom Penh where he was fingerprinted.

They were evaluated by the FBI, which, in a February 2009 report, concluded Ngoc’s fingerprints did not match those in Sgt. Robertson’s official records.

They believed that these attempts to claim the identity of a MIA solider were to defraud the U.S. Government of money in military back-pay.

Nevertheless what is beguiling about the film is the insistence of Vietnam Vet Tom Faunce that the man in question is indeed the missing Vietnam vet in question. Equally vexing is the man’s missing sister, Jean Robertson Holley who in the documentary is convinced that the man she meets is indeed her long lost brother.

Goes on to tell the dailymail: According to best selling author and former special forces soldier Don Bendell, the individual who claims to be Sgt. Robertson, is most probably a Vietnamese-French man who has been manipulating vulnerable veterans searching for MIA/POWs since 1991.

In an email seen by the MailOnline sent to the organizer of a veterans film festival that will show ‘Unclaimed’, Mr. Bendell says, ‘The man seen in the documentary posing as John Hartley Robertson is a guy from France, an impostor, who has been used to scam money from well-meaning veterans and others who would LOVE to see any POW rescued.’

And it gets better:

Reports suggest that Ngoc has been attempting to impersonate Sgt. Robertson since 1982.

Michael Jorgensen the film maker for his part has gone on perhaps in an attempt to hedge himself to say that he is making no judgement about the claims of the man who says he is Sgt. Robertson.

Instead Jorgensen has posited that his film is simply about the journey of one Vietnam veteran, Tom Faunce, as he seeks to find the truth behind the astounding claims.

Interestingly an attempt at communication by the dailymail with Jorgensen has to date led to no response.

In the end one wonders if the filmmaker, Tom Faunce and even the man’s missing sister desperately wanted to believe in the impossible or if this was all a concerted effort to take a myth and sensationalize it as the film industry so often does with stories of the good Vietnam vet who valiantly went to war for his country. Or could it all just in the end be a malicious attempt to take us all for a ride…?