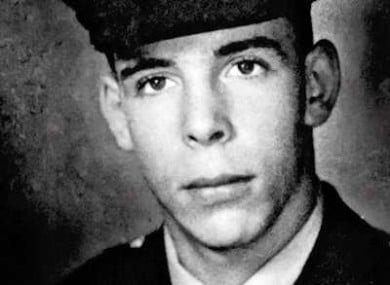 Unclaimed a documentary from Canadian filmmaker Michael Jorgensen is asserting that it has found former American soldier, Master Sergeant John Hartley Robertson in Vietnam after an absence of 44 years. It was long presumed that the soldier had died during the war.

Yet perhaps what is most uncanny about the figure portending to be Robertson is the man purportedly can no longer speak English having by now lived in Vietnam for the last 44 years.

That said the torontostar goes on to say the man never forgot he was a father, a husband and an American soldier who was shot down over in Laos in 1968 during a classified mission. Which of course raises the question why didn’t the man ever try to return to America or for that matter why didn’t the US government attempt to facilitate his return to the US?

‘…..in Emmy-winning Edmonton filmmaker Michael Jorgensen’s documentary Unclaimed, we meet a slightly stooped, wiry 76-year-old man living in a remote village in south-central Vietnam who trembles with frustration or pounds his forehead when he is unable to remember his birthday or his American children’s names. He is only able to speak Vietnamese.

Unclaimed has its world premiere at Toronto’s 20th Hot Docs festival on April 30.

Robertson says he was confined to a bamboo cage in the jungle by North Vietnamese captors and, accused of being a CIA spy, was tortured for a year. Confused and badly injured, he was released and married the Vietnamese nurse who helped care for him. He assumed the name of her dead husband. They had children.’

What though strikes this author interesting and beguiling is the US military’s resistance in assisting Jorgensen in making his documentary, especially when it came time to find the soldier’s family.

Tells one government source in the documentary: “It’s not that the Vietnamese won’t let him (Robertson) go; it’s that our government doesn’t want him.”

The documentary according to Jorgensen came about after a meeting he had with Vietnam vet Tom Faunce in 2012 who wanted to prove once and for all that the man that he had come across in 2008 during a humanitarian mission was indeed the missing American soldier Master Sergeant John Hartley Robertson.

Robertson’s story seemed unbelievable. And Jorgensen was equally skeptical when Faunce contacted him in 2012 about making a documentary in the hope it would add muscle to his quest to reunite Robertson with his American family.

The documentary then goes about the physical outlaying of  proof of Robertson’s birthplace, collected in dramatic fashion onscreen; a tearful meeting in Vietnam with a soldier who was trained by Robertson in 1960 and said he knew him on sight; and a heart-wrenching reunion with his only surviving sister — 80-year-old Jean Robertson-Holly — in Edmonton in December 2012 that left the audience at the Toronto screening wiping away tears.

At the time she had no idea that her brother could still be alive.

Inexplicably, Robertson’s American wife and two children, who initially said they would like to participate in DNA testing, later abruptly declined to be involved, says Jorgensen.

“Somebody suggested to me maybe that’s (because) the daughters don’t want to know if it’s him. It’s kind of like, that was an ugly war. It was a long time ago. We just want it to go away,” says Jorgensen. “I don’t know. What would compel you not to want to know if this person is your biological father?”

At present US officials have chosen not to publicly discuss the documentary nor to comment or to even suggest further testing be done to prove once and for all that the individual depicted is indeed Robertson.

Robertson has for his part returned to Vietnam with no desires of leaving, happy that he has fulfilled his one wish: to see his American family once more before he dies.

Then there was this via doubtfulnews that had me searching as well:

But wait… there’s more. Hmm, this page shows that the Faunce  story, on which this documentary is based, is a dupe.

Sorry that the information concerning John Hartley Robertson (JHR) flying around the net for the past days, has become confusing.

According to persons in the USG, working in Phnom Phen, the Caucasian depicted in the photo has been proven not to be JHR, but to be a French citizen, long time in Cambodia, with a Vietnamese wife, and several children. Proof was produced by a DNA sample, more than one year back.

On receiving a message via email, for a solid contact, from the USG, with this info, who received this from his USG organization in Cambodia, I have become convinced that the brothers Faunce (Joseph and Thomas) are being duped by this Caucasian, whose language is pidgin English and Viet.

I did speak to Joseph Faunce on 25 Feb, prior to his departure / return to Cambodia that very day. These Faunce lads seem thoroughly convinced (that) they have JHR, but those USG personnel on the ground, who have taken DNA from this same man (according to the info I received) are certain this man is a fraud. I wish this was not true; however, it surely seems to be true.

If I understand the premise of the movie correctly, the reason given why this man can’t speak English, can’t remember the names of his own children, and has only cursory recall of his memories from back home, is he suffered brain damage in his accident (not because he’s faking). It’s unlikely a desertion charge would stick. No? If I had a nephew and niece from a long lost brother and could establish their right to american citizenship and a better life, I would take a DNA test in a heartbeat. Not sure why the sister didn’t.

Even MIA groups that believe there are vets left behind have heard about this case since 2008 or 2009 and they’re skeptical. They’ve seen a lot of scammers. Even the missionary himself documents the scammers he had to navigate around to get to the man claiming to be JHR.

One question nobody has asked yet. Could he have deserted? The piece said that the Americans had him listed as KIA so they would have had no reason to look for him. And the fact that he had not crossed paths with any other surviving POW nor is there any record of him in any POW camp.

I watched a documentary the other night about 4 American soldiers that had deserted and crossed over into North Korea. Is it not possible that this is a similar case. And his memory loss could have been selective to protect himself.

Veteran benefits- 40 yrs worth. Repayment thereof if he is proven to be who he is. Think THAT might influence his
American wife & family???