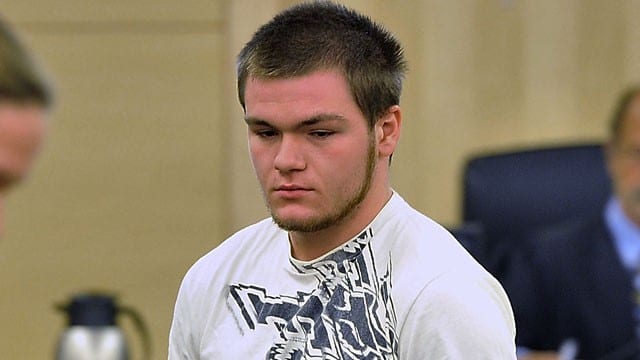 Kyle Dube has been charged with the death of Maine teenager Nichole Cable after a staged kidnapping went horribly wrong. Staged because according to Dube’s brother he wanted to look like a hero after saving her.

Using a fake Facebook account to lure Cable out of her house in the town of Glenburn, Kyle Duble waited in the woods wearing a ski mask.

From there the 20-year-old Dube jumped out and snatched Nichole Cable, duct-taped her and put her in the back of his father’s pickup truck and proceeded to drive off to his intended destination where he would miraculously now rescue her.

Yet here’s where things purportedly become convoluted. Having finally reached his destination, a wooded area near the town of Old Town, Kyle Dube purportedly went on to find that Cable had dies en route. From there it is said Dube dumped her body, covered it with branches and drove  off.

Things nevertheless  finally came to a head When Dube would eventually became a suspect in the by now reported girl’s disappearance after a friend of Nichole Cable, Bryan Butterfield informed authorities on May 14th that Dube had set up a fake Facebook page in his name to gain Nichole’s trust.

Butterfiled went on to tell investigators that “Kyle wanted to have sex with Nichole, but that she has refused his advances.”

Investigators went on to find that on May 12th, Nichole Cable texted a friend to say she was meeting “Butterfield” to buy marijuana, before  disappeared shortly thereafter.

With help from Facebook, investigators were then able to trace the IP address associated with the fake Butterfield account back to Dube’s parent’s house, where he was residing.

abcnews go on to tell during an interview with police, Dube stated that he had a relationship with Cable, and had exchanged text messages with her the day she disappeared, but was at work in Bangor when she vanished. From there he consented to a DNA sample, which later proved to match DNA on a sock found in a wooded area where police were searching for Cable. Cable’s DNA was also found on the sock.

Cable’s body would then go on to be discovered on May 20th after Dube went on to tell girlfriend Sarah Mesinger where Cable’s body lay.  From there Kyle Dube was charged with Cable’s murder the following day.

A grand jury yesterday went on to indict Dube  on charges of murder and kidnapping. If convicted, he faces a sentence of 25 to life.

To date Kyle Dube is protesting his innocence and that he did not conspire to kill Cable.

The exact cause of Cable’s death has yet to be determined.

And then there was this comment I came across on the web that made me wonder as well:

The role of men to be hero in this society is pushed very hard. The thing about the hero complex is that it implies two other identities, the fool and the villain. It also implies that there is a victim.

The view that women are victims and that men are heroes is what led to this. That is pushed just as much as the role of the hero. When a man is rejected as the hero, he immediately falls into one of the other two categories, the fool and the villain. Many times people with the hero complex would rather be a villain than a fool. In this case, this man never learned how to handle rejection, being rejected is being a fool. So he became the villain, and he made her his victim. Through her victimhood, he wanted to be a hero, and in the end he most likely hoped that she would accept him as a mate. Do you see the pattern?