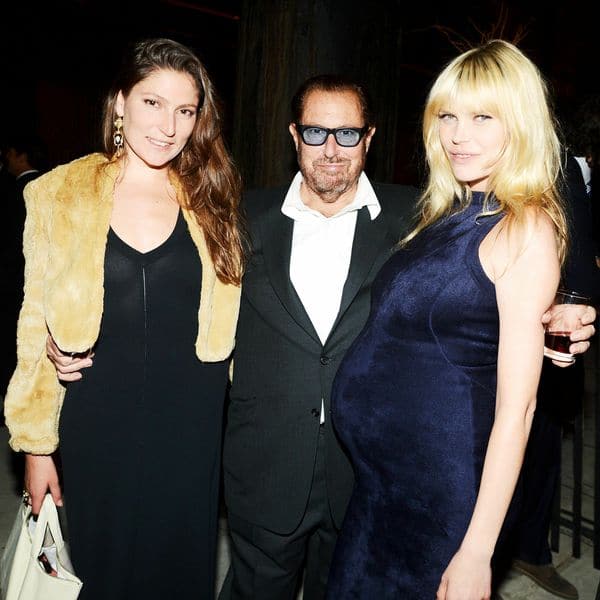 Guests began their evening with specialty cocktails by Patron and Ultimat and hors d’oeuvres on the banks of the East River, with spectacular views of the Manhattan skyline, the River, and bridges, and then enjoyed an indoor feast of seasonal Tuscan fare designed by chef Mario Batali, paired with Ruffino Riserva Ducale and Lumina Pinot Grigio wines.

Upon his chic late arrival the artist himself (with pregnant girlfriend May Anderson in tow) was accosted by paparazzi who busily snapped away.

Asked how he felt about being honored the artist sheeply retorted “Yep, I guess it feels good.”

Asked about the influences behind some of the large images hanging inside the former sugar factory, Julian Schnabel once again uttered ‘Yeah I guess you noticed too,’ before being further swarmed by the paparazzi and well wishers.

The evening continued with a tribute to Julian by Dick Cavett, special performances by Laurie Anderson, Francis Farewell Starlite, and Loren Kramar, and a night of dancing to tunes by DJ Nick Cohen. A limited-edition set of dinnerware, designed by Julian in collaboration with famed porcelain-maker Bernardaud, was available for purchase during the event, with all proceeds benefiting Creative Time.

The Gala went on to raise close to $1.1 million for Creative Time’s programming initiatives.

ABOUT THE BERNARDAUD COLLABORATION | In honor of its 150th anniversary, celebrated French porcelainmaker Bernardaud has partnered with a variety of multi-media artists, including Julian. The artist’s Ogni angelo ha il  suo lato spaventoso (“Every angel has its terrifying side”), a specially designed, limited-edition, porcelain placesetting, was available for sale onsite at the gala. 100% of the proceeds from sales, which totaled more than $40,000, benefited Creative Time. Bernardaud will continue to donate 10% of the proceeds of the plate sales through the month of May.

ABOUT CREATIVE TIME | Since 1974, Creative Time has presented the most ambitious art in the public realm. The New York-based nonprofit has worked with thousands of artists to produce more than 350 groundbreaking art projects that have ignited the public’s imagination, explored ideas that shape society, and engaged millions of people around the globe. For more information, visit www.creativetime.org.