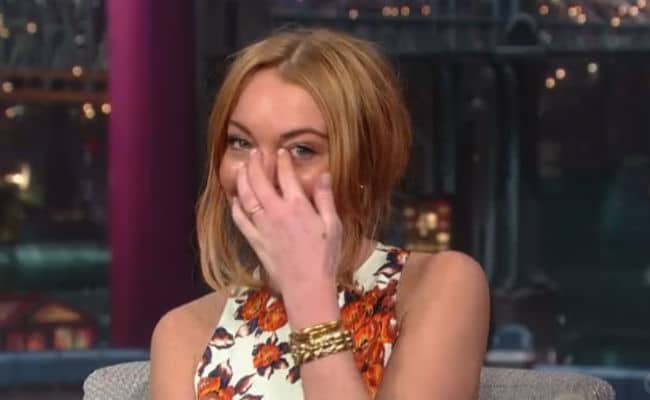 Which is to say that Lindsay Lohan for all her myriad delicious maddening ways is actually human and capable of sometimes shedding her practiced media guard.

There to promote her upcoming appearance in horror flick ‘Scary Movie 5’ Letterman’s consistent jabs at Lohan’s expense with her upcoming rehab and addictions culminated in the actress (for a lack of a better word) shedding tears after Letterman relented and went on to praise the actress for having ‘enough spine, enough sense of yourself, enough poise to come out and talk to me.’

Which is probably why in the end the world has a hard on for Lilo, cause as snotty and ridiculous and self entitled she can be there’s an air of vulnerability, fallibility, and self deprecation to remind us that in some way Lilo doesn’t necessarily believe the script she’s playing which of course raises the question why the public does in the first place?

Then again can you really fault the world for getting giggly and googly eyed when it gets the continual performance it craves? Wet, sleazy soggy and a handful of car chases that would make any daytime soap opera star blush and even shed a few tears too…

And then there was this response courtesy from a gawker commentator who can only in my best guess be an aspiring tabloid blogger:

Please stop humanizing celebrities. We all know they are nothing more than projections on a screen who exist solely to gratify our insatiable appetite for self-righteous mockery. If you humanize them too much, we may all, at some point, have to redirect our judgmental ire inward and to do this would be unthinkable.