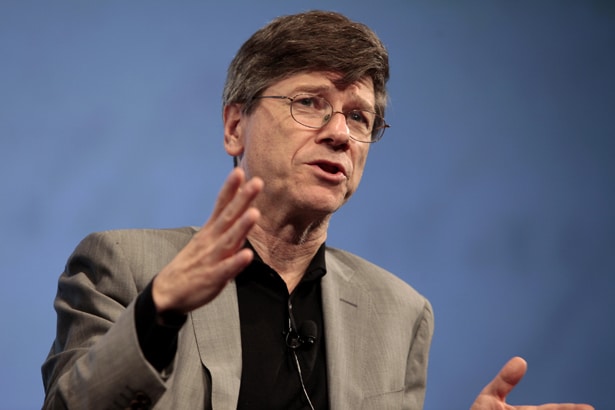 In a disparaging indictment on the affairs of Wall street and politics in Washington, noted academic and twice inductee of Time magazine 100 top most influential people in the world, Professor Jeffrey Sachs  has gone on to say Wall st is essentially been run by crooks who have gamed the season and Washington has essentially abetted.

The stinging remarks come courtesy of a conference earlier this month the noted economist attended in Philadelphia where he went about calling a spade a spade.

nypost: Corruption, insider trading and criminal behavior are rampant on a vast scale on Wall Street today as financiers and Washington play the same greedy games that brought us to the brink five years ago, according to one of the world’s most influential economists.

Wall Street is full of “crooks,” and it never properly cleaned up its act after the financial crisis of 2007 and 2008, Columbia University professor Jeffrey Sachs told a distinguished gathering of bankers and professionals in bombshell remarks at the Philadelphia Federal Reserve building earlier this month.

And what’s causing this you may wonder?

Told Professor Jeffrey Sachs: ‘…….is “a docile president, a docile White House and a docile regulatory system that absolutely can’t find its voice.”

“What has been revealed, in my view, is prima facie criminal behavior.”

“It’s financial fraud on a very large extent,” the adviser to the World Bank and IMF added. “There’s also a tremendous amount of insider trading — you can even watch when you are living in New York how that works.”

“We have a corrupt politics to the core, I am afraid to say, and . . . both parties are up to their neck in this. This has nothing to do with Democrats or Republicans,” Sachs told the Philadelphia conference, “Fixing the Banking System for Good.”

From there Professor Jeffrey Sachs went on to describe an environment of Wall Street buying off politicians with huge campaign contributions.

In the 2012 election cycle, political contributions by the securities and investment sector totaled some $271.5 million, compared with $176 million in 2008, according to the Center for Responsive Politics.

“I meet a lot of these people on Wall Street on a regular basis right now,” Sachs told the conference, hosted earlier this month by the nonprofit Global Interdependence Center. “I am going to put it very bluntly: I regard the moral environment as pathological. And I am talking about the human interactions . . . I’ve not seen anything like this, not felt it so palpably.”

Continued the economist who by then had some in attendance gasping in shock and incredulity ….

Sachs said these same people on Wall Street are out to make billions of dollars, and believe nothing should stop them from doing that.

You can read a partial transcript here, but the audio as recorded by Bill Still, the host of The Still Report, is also worth listening to if you don’t mind your ears exploding with shrapnel.

And then there was this comment on the web that caused me to wonder as well:

I think it’s been known to a majority for quite some time and it won’t change one iota. if there is no will in the political class, it’s not going to happen and wall street will continue to sell its basically flawed products to the market and avoid liability. it’s a bit strange that if you sell a ‘faulty’ toy of hazardous one to the market, there is recourse against the manufacturer but when goldman sachs sells a faulty, hazardous and toxic product to a a market of dupes there is no recourse to be had.