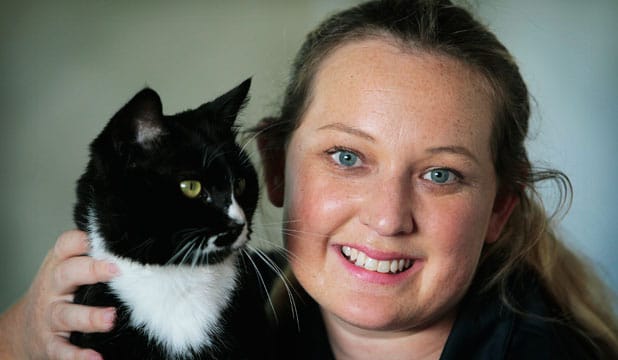 An abandoned cat that survived for more than a year on gorging itself off McDonald’s burgers and fries has been rescued in the New Zealand town of Hamilton after animal advocacy agency SPCA was alerted to the feline’s deteriorating health.

The cat said to be abandoned by its owners as a kitten apparently thrived off the left overs off a local McDonald’s and had by then become a local favorite earning the nickname ‘Frankie‘ by McDonald’s staff and patrons.

Nevertheless a concerned regular who happened to work for the SPCA, Jessica Watson decided to take ‘Frankie’ into her care when she noticed the cat wasn’t as lively as it ought to be, it’s face swollen, his eyelids failing to close properly and his coat constantly matted.

“I estimate he has lived in the McDonald’s carpark for 12 to 18 months,” said Watson.

“Everyone knew to keep an eye out for him. You would go through the drive-through and ask for a burger for you and an extra patty for Frankie.

“He would watch you and trot after the car, wait until you stopped the car and then you would toss him the meat. It was his little routine.”

Hmm, does that sound like a hidden routine amongst some of the less fortunate amongst you?

Watson goes on to tell how after a couple of weeks of inside living and good nutrition Frankie was able to regain his health.

“He wasn’t overweight but McDonald’s wouldn’t meet the nutritional requirements for a cat. Never mind a human being.

“They need very high levels of protein and I wouldn’t think takeaways would provide that.”

Nevertheless it took a while to wean the McDonald’s-addicted Frankie off his junk food of choice.

“When I first took him home he refused to eat anything because it wasn’t McDonald’s,”

“I seriously considered going back there to get him a burger.

“I would put pet food down and he would give me a look like, ‘What is that?’ “

Surely that doesn’t sound like any of you out there?

Fortunately for Frankie an avalanche of would be adopters have stepped up since his plight became public, that said let’s hope someone might want to come forward for your tawdry puffy eye lid harried self in need of more than a burger…